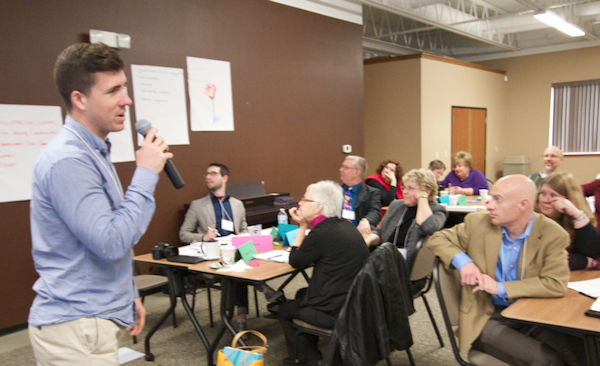 Alex Plum, a member of the Michigan Conference Design Team, finds God at the heart of their work.

In the spring of 2015 the Detroit and West Michigan conferences put their ballots in bags that were brought to Lansing on “Count Day.” When the bags were opened and tabulated on June 10, then Bishop Deborah Lieder Kiesey announced the commitment of Michigan’s United Methodists to become one annual conference.

A Design Team was named by Bishop Kiesey and that group has been meeting together since September of last year, sharpening a vision and guiding the process that will result in a plan for action at the 2017 Annual Conference. The Design Team, made up of 27 people, brings strong passion and various gifts to this task.

One of those Design Team members is Alex Plum, a layman from the Detroit Conference. As Senior Program Coordinator and Junior Investigator with the Global Health Initiative at Henry Ford Health System, Alex develops community-level programs that promote the health of adolescents, LGBT youth, and vulnerable populations by drawing on leading global evidence-based research and practice. Alex is a certified candidate on the Deacon track for ordination in the United Methodist Church and is enrolled at Garrett-Evangelical Theological Seminary. His vocational call centers on empowering the church to be a conduit to health, in all of its dimensions, for all God’s people. Click here to read more about Alex and his fellow team members.

The Design Team has scheduled four public sessions around the State in November and January. The purpose of these gatherings is to offer detailed proposals and to receive direct feedback. After the sessions are concluded, the Design Team will further refine the proposals for presentation to Annual Conference, June 1-4, 2017 at the Grand Traverse Resort.

What excites Alex Plum about the creation of one conference in Michigan? He shares, “Having come together from across the state — representative of both conferences and most (if not all) of our districts with a healthy balance of clergy and lay people — our most important work has been to build relationships with one another based in unconditional love.”  He looks forward to these upcoming listening sessions, “where we will have more opportunities to reflect these relationships back out to our sisters and brothers in both conferences.”

Alex anticipates that holy moments lie ahead. “Through the Listening Sessions, the Design Team is modeling the relationship of the Trinity and doing our best to facilitate the ‘infinite renewal’ at the heart of the new thing happening in our midst.”