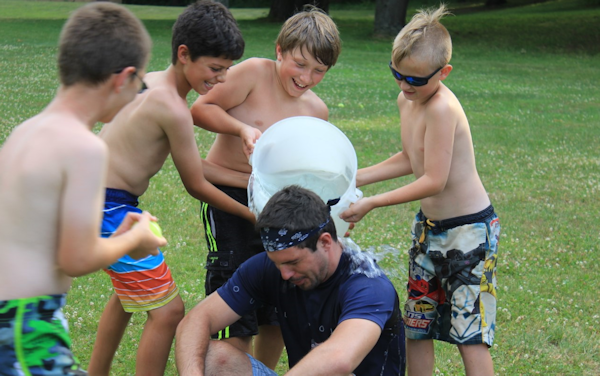 A counselor at Judson Collins camp remembers his baptism thanks to an eager group of campers. ~photo courtesy of Michigan Area Camping Ministries

At the close of the 2016 camping season the Michigan Area celebrates the making of new disciples.

“Is this conversation helping us to make disciples of Jesus Christ?” That question is posed during the course of every meeting of the Board of Michigan Area Camping Ministries, according to their Executive Director George Ayoub.

This focus on disciple-making was the energy that prompted growth of the program in 2016. “The Michigan Area camps had 10% more campers in 2016,” George reports. “That’s 1,800 children, youth and adults experiencing Christ in new ways. Each camp ground saw increases.”

George especially remembers a couple he encountered when he visited Lake Michigan Camp. “They met some years ago at the camp in Pentwater and were later married there. They had returned to celebrate their anniversary,” he says. “The couple was very excited to see the improvements in the facilities.” The bonus came when they posed for a picture on the spot they were wed. “This time they were standing in the water.” Relationships—with others and with God—are at the heart of Christian camping.

Ayoub especially wants to thank donors for their generosity. “Camping Ministries gave 220 scholarships to campers in 2016,” he notes, “in an amount close to $30,000.”

“That’s what keeps me going,” George admits. “It is wonderful to come across a donor, a person who was touched by God at camp, who then says, ‘Here’s my gift to help make that happen for someone else.’” Coming out of a hurt-filled world into a camp that is full of love and radical hospitality makes a difference for many. “People tell me how exciting it is to be able to bring their family to a place where Christian attitude is everything,” he relates.

The unified approach that encourages camping from everywhere, to everywhere has been a blessing. Children living only miles from Judson Collins and others living close to Wesley Woods are now attending those camps for the first time. “People are crisscrossing that imaginary line between the two conferences and they are excited about what they experience when they do that,” George explains. “Families appreciate the greater flexibility.”

“The Board has been through a time of stress and struggle regarding survival,” George says. “Now we can focus on moving into a future of growth. Past the point of panic, we can now think out of the box.”

Ayoub gives personal thanks to the Board members, who are all volunteers who committed “countless hours of work to bring the ministry to where it is now.”

Currently the Board is in the process of hiring three managing directors: full time for Lake Michigan/Albright Park and Wesley Woods; a summer position is being filled at Camp Kinawind. Other priorities are marketing and the creation of a unified registration system.

The Board has given all camp staff and volunteers the challenge to go beyond “how-we-have-always-done-it.” George adds, “We are identifying structural improvements to upgrade the camps. It is time to fix up areas of major neglect.” He expresses joy in the construction of the new dining hall at Wesley Woods and the restoration of the tabernacle at Crystal Springs.

Fund-raising is always a significant aspect of ministry. George reports that $250,000 has been received for the Changing Lives Campaign in the West Michigan Conference. He also announces an Area-wide special Matching Funds effort set for Giving Tuesday, November 29th. More details on Giving Tuesday will be shared soon.

“Camps are more than places. They are holy spaces where the Holy Spirit is at work,” George concludes. “Children sometimes cry when they come to camp for the first time but by the end of the week they cry because they don’t want to leave.” Making disciples. Changing lives. Go to umcamping.org to learn more.