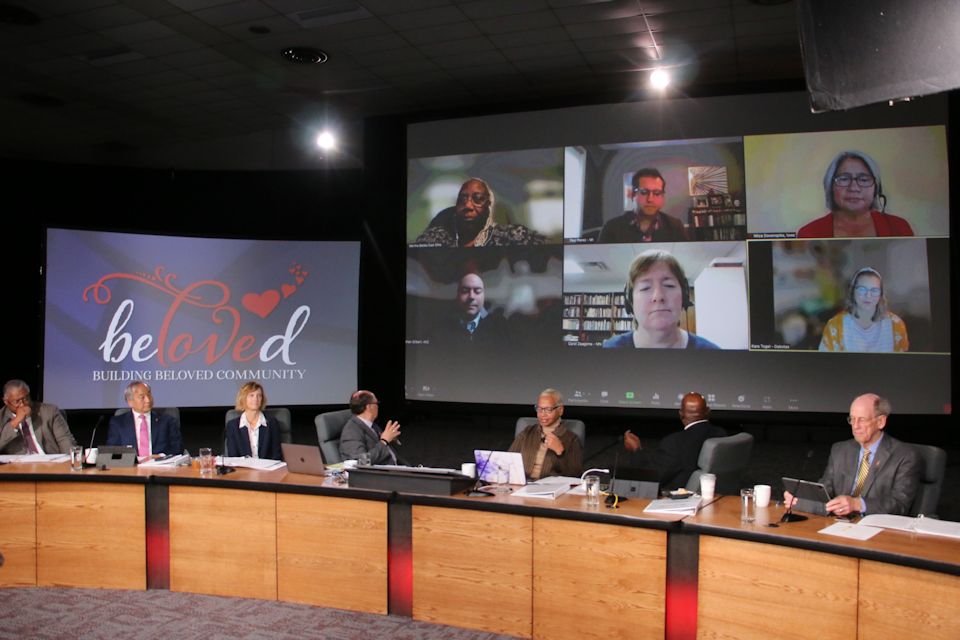 A six-member writing team made a virtual appearance at the North Central Jurisdictional Conference session held on Thursday, Nov. 11, 2021. They introduced their draft of a Covenant to Build Beloved Community. United Methodist baptismal vows provided the framework for the statement that was approved by the assembly. ~ ncj photo/Rick Wolcott

In March the Commission on General Conference will determine whether the assembly will meet later this year. In the meantime, various groups continue to make plans for the future.

Two years after a diverse group of United Methodists introduced a proposal for separation, a global pandemic continues to keep the denomination uneasily together.

However, with General Conference scheduled for later this year, preparations are accelerating for the future United Methodist Church and the theologically conservative group that plans to break away. Meanwhile, a theologically progressive group that announced the launch of a new denomination in 2020 is re-evaluating its plans.

Amid all these preparations, long-simmering disputes over LGBTQ inclusion — that led to the proposed split in the first place — have started boiling up again.

Council of Bishops President Cynthia Fierro Harvey acknowledged that anxiety is running high for many in the church. She said she often reminds herself of Paul’s advice in Philippians 4:6-7 not to be anxious but to bring prayers and petitions to God.

It’s been a busy season. Recent developments include:

Tensions reached a breaking point with the 2019 special General Conference, which, by a vote of 438-384, strengthened bans on same-sex weddings and “self-avowed practicing” gay clergy. The relatively narrow vote did not settle the debate, but instead sparked widespread resistance and hastened discussions of a denominational divorce.

But for the past two years, much of the denomination has been in a holding pattern waiting for action by General Conference — now twice postponed by the pandemic.

The coming legislative assembly faces multiple proposals for division along theological lines. The most endorsed of these is the Protocol of Reconciliation & Grace Through Separation, negotiated by a professional mediator with a theologically diverse group of United Methodists.

Under the proposal, churches and conferences that support restrictions on gay marriage and ordination can vote to leave with church property and $25 million to form a new traditionalist denomination. The protocol also sets aside $2 million for any other new Methodist denominations that form.

The Wesleyan Covenant Association, a theologically conservative advocacy group, has worked toward forming that traditionalist denomination — now named the Global Methodist Church. However, General Conference delegates have the final say on whether the protocol takes effect as written.

The Commission on the General Conference, which organizes the international assembly, expects to decide by the end of March whether the big meeting can go forward as scheduled Aug. 29-Sept. 6 in Minneapolis. The commission is looking at not just delegates’ access to vaccines but also the availability of visas. While visas are an issue for every General Conference, the pandemic has caused more difficulties. The commission has been clear that this coming assembly must have a reasonable level of global participation.

The commission met January 26, mostly in closed session, and did not announce any final decisions about whether General Conference can go forward.

Even with General Conference still up in the air, United Methodists are moving ahead with plans to go in different directions.

In November, the Council of Bishops offered a vision for the continuing United Methodist Church as a big-tent denomination that is rooted in Scripture, centered in Christ, and welcoming to all churchgoers — whatever their sexual orientation or theological outlook.

“Our best witness is to love each other as Christ loves us, to show the world the supernatural power of the Holy Spirit to bind us together despite our differences,” the bishops wrote in “A Narrative for the Continuing United Methodist Church.”

Harvey, who also leads the Louisiana Conference, said she sees United Methodist congregations, conferences, agencies, and individual followers of Jesus who are already living into the narrative.

“By that I mean, they are being faithful to God’s call to create space and embrace people from the left, the right, and the in between,” she said.

As the bishops were developing their narrative, an ad hoc group of United Methodists urged bishops not to wait for General Conference but allow congregations that want to do so to leave with property now. The group’s open letter, titled “A Call to Grace,” garnered more than 2,030 signatures.

The special online session of the North Central Jurisdiction — representing ten conferences in the U.S. Midwest — offered a statement that shares similarities with both the bishops’ narrative and “A Call to Grace.”

By a vote of 135-32, the delegates approved a “Covenant to Build BeLoved Community” that calls on the jurisdiction to work to end racism and to create a culture that welcomes and affirms LGBTQIA+ people. The covenant also encourages conferences to accommodate local congregations and clergy seeking disaffiliation.

John Lomperis, a delegate from the Indiana Conference and advocate with the conservative Institute on Religion and Democracy, asked for a decision of law on whether the covenant violates the Book of Discipline. Lomperis specifically questioned the section that requests bishops “dismiss charges related to LGBTQIA+ identity or officiating same-gender weddings.” That section goes on to say, “We will not restrict God’s calling based solely on a candidate’s sexual orientation or gender identity.”

Bishop David Bard, who was presiding when Lomperis asked for a ruling, decided that the section is aspirational and therefore does not violate church law. The section “asserts important values and encourages consideration of how one might live into those values,” wrote Bard, who leads the Michigan and Minnesota conferences. All bishops’ rulings of law must go for review by the Judicial Council, the denomination’s top court, which recently has begun deliberations on its fall docket.

Invoking both the bishops’ narrative and the North Central Jurisdiction’s covenant, Iowa Conference Bishop Laurie Haller announced that the conference would not wait to live out the documents’ vision. While no one would be compelled to violate their convictions, the conference vision statement said, the question of same-sex weddings would be up to local congregations starting this month.

“To put it clearly, pastors will be able to choose which weddings they officiate, as long as it is two consenting adults who have been counseled,” the statement said. “Likewise, church leadership, in consultation with their pastors, will be able to determine their own policy regarding weddings.”

Many bishops have quietly held complaints related to homosexuality in abeyance as requested by the protocol. Both the Wesleyan Covenant Association and Good News, another theologically conservative advocacy group, argued that Haller’s statement went further and violated church law.

“If Bishop Haller and her cabinet permit this policy countenancing defiance of the Discipline to go into effect, I think they risk returning the UM Church to the level of conflict witnessed at the 2019 General Conference,” warned the Rev. Keith Boyette, WCA president.

In his Perspective column for Good News, the Rev. Thomas Lambrecht wrote that the announcement could have significant consequences.

“Local churches and laity have power, too,” he wrote. “They have the power of purse strings. … And secular courts might be inclined to say that, by this action, the Iowa conference has repudiated its status as a United Methodist conference, breaking the trust clause that holds churches hostage to the whims of a wayward church leadership. Who knows where this road of rule by power could lead?”

Members of the Iowa extended cabinet told UM News that the cabinet took the lead in developing the conference’s vision statement in response to false rumors and fears being spread about the future United Methodist Church.

“In this statement by the cabinet, we have been clear — and this is our truth — that for anyone who wants a future in The United Methodist Church, they will have a home,” said the Rev. Lanette L. Plambeck, assistant to the bishop and director of clergy and leadership excellence.

Living that vision right now, Plambeck said, gives United Methodists the chance to make decisions based on facts, not fear. “There is a difference between a truth that is asserted and a truth that is observed and experienced,” she said.

Iowa is not the only conference seeing changes. At a virtual session Dec. 4, the Zimbabwe East Conference resolved to relieve Simon Mafunda as its conference lay leader following the WCA hiring him as its Africa coordinator.

Delegates from the seven districts unanimously passed a vote of no confidence, asserting that his new employment presented a potential conflict of interest with his voluntary conference position as lay leader.

Mafunda called the vote flawed, saying it did not follow any established procedure.

“It is very key to be careful how we follow procedures so that it validates the outcome of the results,” Mafunda said. “I still respect and appreciate those who elected me to office but feel that they were all cowed down by this process.”

He added that he does not see a conflict of interest. “My appointment as a consultant had nothing to do with my role as a conference lay leader,” he said. The conference has not yet named a new lay leader.

Amid these disputes, the WCA continues its planning for the Global Methodist Church. In December, the WCA Sexual Holiness, Wholeness, and Brokenness Task Force released a 22-page report on proposed teachings around sexuality and gender. WCA members are now taking feedback and plan to bring the report for adoption at its Global Legislative Assembly on May. 7, 2022. The WCA continues to prepare other documents on sacraments and other aspects of church life for the still-being-formed Global Methodist Church.

Meanwhile, the people forming the Liberation Methodist Connexion offered a transparent look at the challenges faced by all groups trying to start something new. In 2020, the connexion announced its launch as a new denomination that would center the voices of people of color as well as queer and transgender individuals.

In late 2021, the connexion’s collaborators offered a full assessment of where they are now, noting unexpected challenges and limited resources.

“Common ground was easier to find when we were focused on critiquing old institutions,” the group said in the statement. “It has been much harder to find as we all bring ideas about what can be.”

For now, the connexion — which is all unpaid volunteers — has decided that: “Positioning ourselves against the United Methodist Church or any other spiritual institution does not serve us and is an unfair burden to place on ourselves.” The connexion also no longer is identifying itself as a denomination.

“We are a group of people working to dismantle existing systems of oppression and liberating marginalized people, and we want to do that with as many people as possible,” said Adrian Hill, one of the connexion’s collaborators and a General Conference delegate. “These issues transcend membership in existing denominations.”