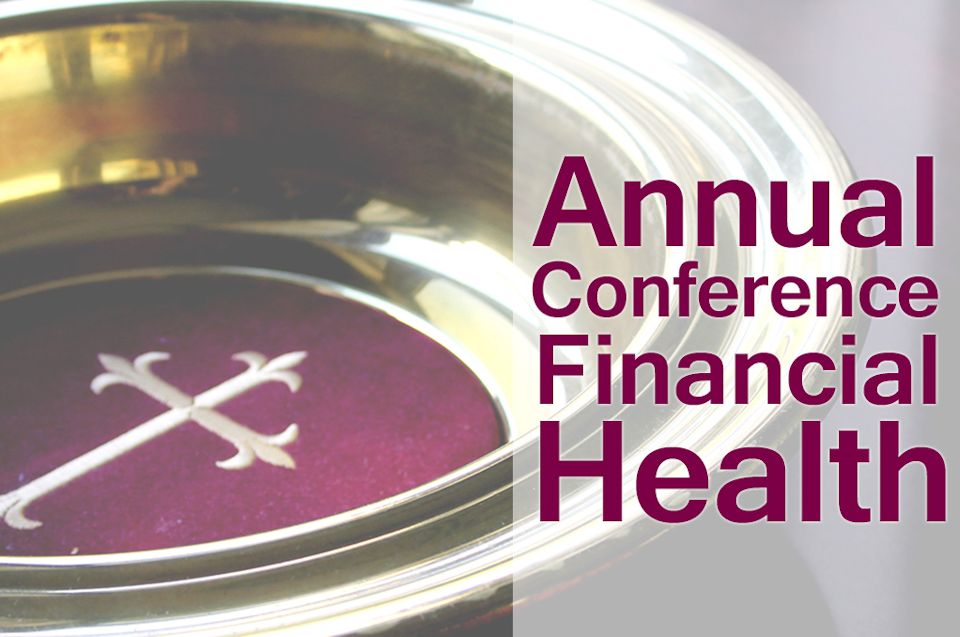 More than seven months into the COVID-19 pandemic, the financial outlook for conferences is decidedly mixed. But even with reduced giving, conference treasurers are saying the situation is not as dire as it appeared in the spring. ~ UMCOM photo/Kathryn Price; UM News graphic/Laurens Glass

U.S. conferences — like the congregations they serve — are feeling the financial pinch. But they are finding ways to offer churches relief and strengthen ministry in these lean times.

For most United Methodists, these are hardscrabble days — bringing to mind biblical images of scorched grain and skinny cows.

But just as Joseph did in the Book of Genesis, United Methodist conferences are dipping into their stores to help local churches and other ministries respond to COVID-19’s devastation and make it through the lean times.

“The majority of conferences are OK,” said the Rev. Nate Berneking, speaking of the regional church bodies. He is the Missouri Conference’s director of financial and administrative ministries and the president of the denomination’s National Association of Annual Conference Treasurers in the U.S.

“It’s not rosy. It’s not, ‘Everything is great,’” Berneking added. “But we’re kind of holding our own.”

More than seven months into the COVID-19 global pandemic, U.S. conferences — like the congregations they serve — are feeling the financial strain of drops in giving and increases in their communities’ needs. At least three conferences have laid off staff, and many plan for significantly reduced budgets in 2021.

As the disease continues to ravage world economies and personal lives, the strain will likely grow. In the U.S., new jobless claims remain higher than at any point during the severe 2007-2009 recession.

Still, the outlook is not all grim. Conferences are using their reserves to sustain ministry and provide their churches with financial relief. They are also finding new ways to minister in this time of social distance, including taking a lead in the denomination’s renewed commitment to racial justice.

The United Methodist constitution defines the annual conference as “the basic body” of the church. Each conference acts as a linchpin connecting the global denomination.

All these endeavors require money. Conferences rely on apportionments — that is, shares of giving — from local churches to support ministry. Conferences, in turn, pay the apportionments that support general church ministries such as bishops and mission work around the globe. Some 99% of financial support for denomination-wide ministries comes from the 54 U.S. conferences.

Since the pandemic put millions of people out of work and shuttered in-person worship, many conferences have given their local churches a jubilee on their usual apportionments.

The Missouri Conference permitted churches to withhold as much as a quarter of their giving, Berneking said. At this point, giving to the conference is down 9% compared to last year. “The fact they’ve only withheld 9% is pretty good, I think,” he said.

The Greater New Jersey Conference — in the U.S. epicenter of the contagion during the pandemic’s early months — allocated $5 million to support congregations and communities during the crisis.

That total included an up-to-a-four-month holiday from apportionments as well as $2.2 million in grants to congregations for food distribution and emergency needs for people in the community, clergy salaries, and benefits, and congregational bills.

The funding came from reductions in expenses, the furloughs of all conference staff for 10 Fridays during the summer, the sale of church property, and an internal loan from the conference’s Harvest Mission Fund.

Randy Bowman, the treasurer of the Desert Southwest Conference, said the decline in giving is nowhere near the nightmare scenario he feared this spring. COVID-19 closures have also reduced expenses.

“The result is that I can honestly say that I don’t think that COVID-19 has had any significant negative financial impact on our conference ministries,” Bowman said.

The West Virginia Conference has seen collections dip a bit, but its financial situation is steady.

“Many of our largest and smaller churches have reported receiving more in offerings and donations than historically experienced,” said Jamion Wolford, conference treasurer. “The apportionment collections support these reports.”

Before the COVID-19 crisis, many conferences already faced a slump in giving after the tumultuous special General Conference in 2019 led unhappy congregations and individuals to withhold money despite a strong U.S. economy.

The pandemic postponed General Conference and put those plans on hold. But the denomination’s uncertain future and the turbulent economy are both affecting giving, said Keith Cox, the North Georgia Conference treasurer.

His conference — the largest in the U.S. — has seen giving drop by about $1.9 million compared to last year, he said. But he added that the conference was already asking for $940,000 less than in 2019. For now, Cox said, the conference is managing and does not anticipate any staff reductions in the near future.

Early in the pandemic, North Georgia and other conferences received some welcome help meeting congregations’ needs.

Wespath, the denomination’s pension and benefits agency, in April offered a three-month premium holiday for conferences on the clergy disability and death benefit program. The agency also allowed a temporary deferral of HealthFlex health insurance premiums and issued refunds for March 2020 HealthFlex premiums.

Conferences and individual congregations also got a needed boost through the federal Paycheck Protection Program, which offered federally guaranteed small-business loans to keep people on the payroll during coronavirus-related closures. Under the program, loans can be forgiven — essentially becoming grants — if employers meet certain requirements.

Some 40 conferences have received loans under the federal program, and they all helped local churches qualify for funding. As of Oct. 1, the Small Business Administration had not yet forgiven any of the program’s 5.2 million loans. Still, United Methodist treasurers expect to qualify for grant treatment.

With the help from the Paycheck Protection Program, the Texas Conference has remained fully staffed and compensated, said the Rev. Carol Bruse, conference treasurer.

The conference is cutting next year’s budget by $1.9 million, but the ministry realignment was already in the works two years before the pandemic.

“The plan focuses not only on better matching expenses with receipts,” Bruse said, “but also discipling differently for a new era — largely by decentralizing, by moving money and ministry closer to our districts and local churches.”

Nevertheless, the COVID-19 crisis has posed real challenges to conferences.

The Alabama-West Florida Conference, citing the pandemic, announced in May that it was eliminating 14 conference and district positions as of Sept 1.

Bishop David Graves said his conference was already anticipating making reductions because of the 2020 General Conference, but the pandemic accelerated that financial reckoning. Still, this was a difficult decision, he said.

“Our desire is for the Alabama-West Florida Conference to remain financially healthy and viable, and that means analyzing missional giving trends and understanding that a pandemic will, without a doubt, affect funds coming into the conference,” he said.

“These plans are necessary even though the conference has received Paycheck Protection Program funds,” Bishop Sharma Lewis told the conference in May. “While helpful and significant, these funds do not eliminate underlying, systemic financial challenges.”

Because of budgetary concerns, the Indiana Conference let go of six people and eliminated an executive-level position. The conference reduced its 2021 budget by $800,000.

“It would be an understatement to say that 2020 has been a very, very difficult year,” Chris Lantz, the vice-chair of the conference’s Council on Finance and Administration, told the conference at its Oct. 10 online session. But with help from the Paycheck Protection Program, conference reserves, and cutbacks, he said the conference had maintained vital ministry such as camps. The conference also added $50,000 to its budget for anti-racism work.

Conferences and churches continue to face a great deal of uncertainty.

“I don’t know that we are ever going back to the way it was before, and we may have to figure out new ways of doing ministry,” said Berneking of Missouri.

But he also struck a note of hope.