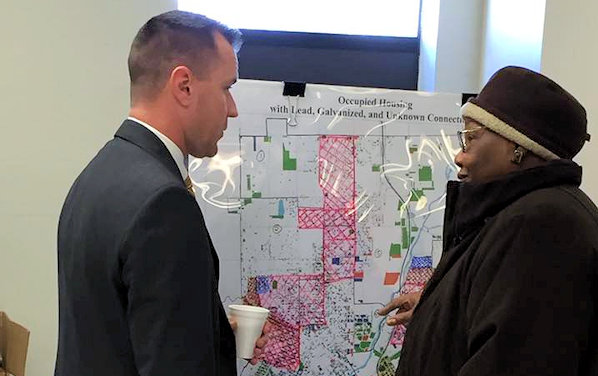 This week the court acted to aid Flint as United Methodists extend 18 months of commitment to the city.

Greg Timmons calls it “recalibrating.” That’s his term for the progress being made on numerous fronts in the United Methodist response to the water emergency in Flint. Greg has served as the Coordinator of the church’s Flint Water Recovery since August of 2016. It could be said that “partnering” is the engine that has driven many of his recalibrating efforts.

The Rev. Jeremy Peters, pastor of Flint: Court Street United Methodist Church and fellow water warrior, says of Timmons: “Greg knows the big picture in Flint better than anyone. He knows what’s being done and what can be done.”

The Crossroads District of The Detroit Conference has been a major player in water response since the fall of 2015. A grant by The United Methodist Committee on Relief (UMCOR) enabled the hiring of Peter Plum as the first staff member to guide the Church’s response. Timmons took the reins from Plum seven months ago as needs moved from relief efforts focused on water bottles and water filters toward recovery efforts of a more long-term nature.

UMCOR support ended on March 30, 2017 which means more fund-raising efforts are ahead for Greg. But for now, good uses are being found for the gifts to the Bishop’s Water Appeal of The Michigan Area, announced a little over a year ago by then Bishop Deborah Lieder Kiesey.

Greg reports, “there are constant positive changes” as he collaborates with a wide network of partners, including non-profits, corporations, faith-based bodies, governmental agencies, community organizations and universities.

The United Methodist Church is currently involved in a number of initiatives.

Bethel has served as a Help Center since last November; Asbury started up as a hub in February 2017. Together, they have served over 10,500 households representing 33,400 men, women and children.

The purchase of a truck from the Bishop’s Fund is now providing home delivery to neighbors out of Asbury UMC. Harold Woodson, a Community Developer with the General Board of Global Ministries, is now based at the Bethel Help Center but helps facilitate some needs across the United Methodist network in Flint. The Bishop’s Fund made a grant toward Woodson’s hiring which was then matched to cover his ministry for the first year.

Various training opportunities are addressing other needs created by unclean water. A Healthy Skin Seminar hosted at Bethel UMC involved the chief medical executive of The State of Michigan, Dr. Eden Wells, as a keynote speaker. She spoke to skin rashes plaguing those exposed to city water and ways to promote healthy skin. Thanks to Genesee Health Systems, bottles of skin lotions were distributed. “This may not sound exciting to an outsider but this was a really impactful activity that The United Methodist Church facilitated,” Greg notes.

Expectant mothers drinking lead-contaminated water during the past two years have transmitted lead to their children while yet in the womb. Infant Massage Seminars are being held at Bethel and Asbury UMCS. These classes, led by certified professionals, teach parents how to help stimulate brain growth in their babies. The churches have also provided lead-mitigating food to nursing moms. Beaumont Hospital has collaborated with this effort and has provided free blankets and carrier wraps to seminar participants.

There is an exciting plan on the drawing board for summer 2017. “You can really see the Lord’s work in this,” Greg says with enthusiasm. This inspiration came to Greg as he drove through the city thinking, “Wouldn’t it be great for Flint’s kids to enjoy a day of fun and learning with, of course, food?” That was the beginning of the Pop-Up Museum collaboration with Flint Children’s Museum, The United Methodist Church, Kettering University, The Mott Foundation and the Food Bank of Michigan. Partnerships! Again, partnerships! The United Methodist Bishop’s Fund has contributed $12,000 to this project.

This summer six churches including Bethel, Asbury, and Court Street UMC will house portable “Blue Block” learning stations where children and parents can interact. STEM topics (Science-Technology-Engineering-Math) are central to Kettering’s approach, which even includes some robotics.

Timmons is especially excited about the Pop-Up Museum effort. Why? “Flint’s children experience challenges,” he explains. “But there is hope! It’s so important to exercise the brain in active play and we, The United Methodist Church, will provide this.”

While focused on challenges of society and culture, Greg stays focused. “Remember! This is all for the Great Commission. Everything we are doing has to be for the fulfillment of making and teaching disciples for Jesus Christ.”

There’s another end of summer initiative that Greg describes as “a giant evangelistic, mission bridge event.” The United Methodist Day at the Children’s Museum is now taking shape. This Sunday event will be open to all Flint families. The experience will start with a meal at a United Methodist Church, followed by transport to the Flint Children’s Museum. The invitation is extended without cost. Funding will be provided by the Bishop’s Appeal.

For the 2nd year a Freedom School will be hosted at Bethel UMC. A program of The Children’s Defense Fund, Freedom School is a six-week experience aimed at boosting reading levels, positive social interaction, and building self-esteem. The hope is to open Freedom Schools in several locations in 2018.

While the United Methodist Water Recovery began, and rightly so, with water filters and bottled water, efforts now focus on spiritual, mental, and emotional health over the long term.

Timmons reports that the Bishop’s Fund will provide a Pastors’ Retreat later this year. He cites UMCOR statistics: “If leaders and caretakers are not supported during a prolonged crisis, it is likely they will leave the ministry in the course of three years.” Skills for crisis management skills and self-care will be among the topics covered in the training.

Also set for launch during 2017 is what Greg has named, “The Urban Male Initiative.” Once again, Timmons will call upon the reach and the resources of a number of agencies to make this happen, among them The State of Michigan and Genesee County Chamber of Commerce.

“I am not apologetic about being a born-again, Christ-filled believer myself. It is my hope that the Christ-donated dollars from the Bishop’s Appeal will help people know the Lord as they are improving their lives.” ~Greg Timmons

Designed for urban men 18-26 years old, Timmons hopes to create an ongoing educational opportunity for “men who have no support, no employment, and no life plan.” He continues, “I want to break the pipeline to prison here in Flint.” The course work would involve decision-making, emotional intelligence, healthy self-esteem, goal setting, and fiscal accountability. A graduation experience would introduce the men to potential employers. “This is for people who have been kicked in the gut and who have decided they don’t matter,” Timmons observes. “Everyone matters.”

Greg plans to invite churches to recruit mentors who will provide spiritual support to the men during this process. “I am not apologetic,” he confesses, “about being a born-again, Christ-filled believer myself. It is my hope that the Christ-donated dollars from the Bishop’s Appeal will help people know the Lord as they are improving their lives.”

The past 18 months of collaborations in the City of Flint have given birth to a new initiative. Crossroads District Superintendent, the Rev. John Hice, recently designated Flint as a Mission Zone. The Rev. Jeremy Peters will act as facilitator. Greg Timmons will be a member of the group. He describes his role as “hovering over this new collective for awareness of resources and ministry opportunities.”

Greg Timmon’s United Methodist partner just got stronger. Rev. Peters is excited for this new way of approaching ministry through “big picture relationship.” He says, “We can get really locked into caring for just our churches and the pressures of our own settings to the point we miss opportunities to move the needle in terms of what the whole city needs.” The Mission Zone will be comprised of both pastors and laity from eight churches in and around Flint.

The Mission Zone has met once. At present the focus is on demographics and vision-casting not programming. “We want to get to the point where Flint’s pastors think of ourselves not as appointed to a single congregation, but as a pastor appointed to the ministry of The United Methodist Church in Flint,” Peters explains. That begins, however, with sharing stories of each congregation’s strengths and history. “So many conversations in Flint are around lack and need and scarcity and what we don’t have.” Jeremy says. “So it’s helpful to start by asking the question, ‘What is your church good at?’”

Peters believes the enormity of the water crisis opened a window to this new relationship among churches. “We are living in a moment when we realize the need in our community is bigger than any one congregation can address,” he shares. “Pastors in Flint understand that we must work together to make a dent in this.”

While headlines in the news still tend to speak of pipelines and bottled water, people like Greg Timmons and Jeremy Peters are taking the long view. “Now we are all trying to figure out how we don’t just supply water but walk alongside our neighbors for decades,” Peters concludes.