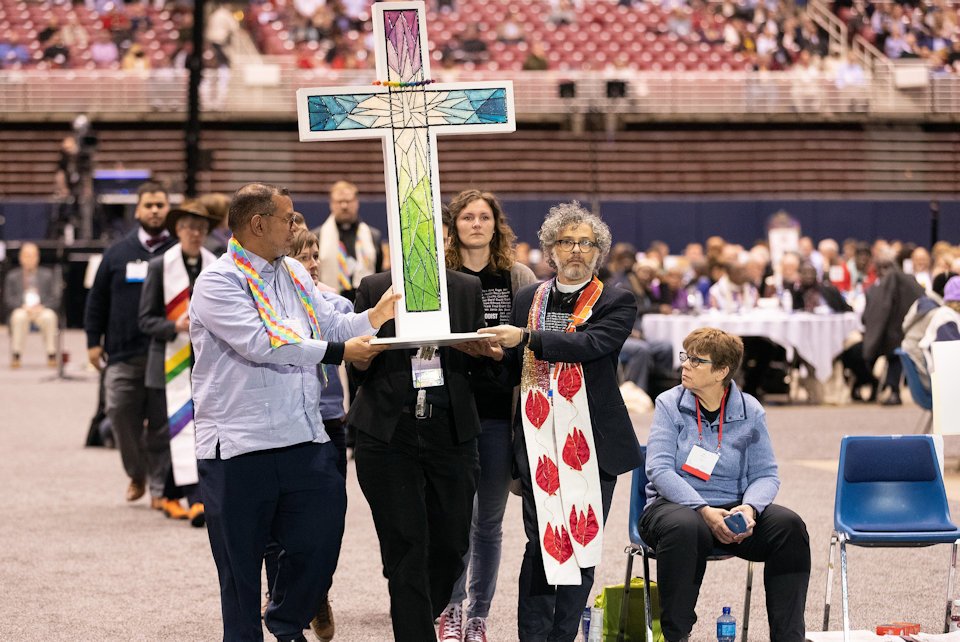 Delegates Jorge Lockward (left) and the Rev. Alex da Silva Souto carry the altar cross as they help lead a protest of the outcome of the 2019 United Methodist General Conference in St. Louis after the legislative body tightened the church’s rules against same sex marriage and gay clergy. ~ umns photoMike DuBose

The Michigan Conference Board of Justice laments harm to the LGBTQAI community caused by actions of the 2019 General Conference.

In a letter to Bishop David Bard, dated March 20, 2019, the Board of Justice of The Michigan Conference stated their concerns about actions taken at the 2019 General Conference.

The words of the prophet Amos, as paraphrased in The Message, calling for “justice – oceans of it,” served as an introduction to the statement.

The statement, “representing the overwhelming majority of the Board,” according to its chair the Rev. George Covintree, laments the harm done to the LGBTQAI community through the passage of the Traditional Plan on February 26, at the Special Session.

After describing how the rights of LGBTQIA people are denied around the world, the Board of Justice pledged to work harder within the Michigan Conference to be “advocates and allies of the LGBTQIA community.” Intended actions include support and funding for local congregations and pastors working with LGBTQIA members; telling stories of harm being done to individuals and families; and witnessing to the gospel’s message of compassion and inclusion.

Click here to read a pdf of the letter.

The Board of Justice is the second Michigan Conference agency to issue a public response to GC 2019. “We stand with the Conference Board of Ministry’s March 13 statement,” Covintree noted.

The Michigan Conference Board of Justice is composed of four divisions: Church and Society, Religion and Race, Status and Role of Women, and Disability Concerns.