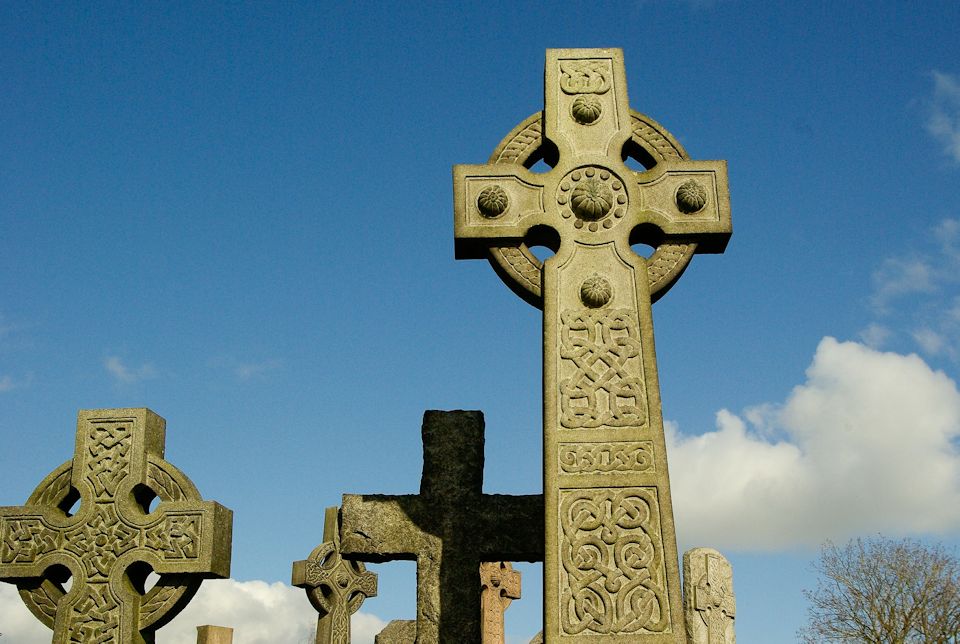 The Celtic Cross is a Christian symbol featuring a nimbus or ring atop the cross. It emerged in Ireland, France and Britain in the Early Middle Ages. ~ image by Jacqueline Macou from Pixabay

Halloween has become a very popular holiday on the cultural calendar. However, beginning in the Middle Ages, All Hallows Eve was a religious observance.

The word “Halloween” (or “Hallowe’en”) means “the evening of Hallows.”

“Hallows” is simply an older English way of saying “saints” — so, the Evening of Saints.

But why “the evening?” The ancient Jews understood the day as beginning with sunset rather than sunrise, just as we see in Genesis 1: “And it was evening, and it was morning, day one.” (Genesis 1:5). And because the day begins with sunset, the first worship service of a given day would be the evening service.

Put it all together, and Halloween refers to the first service of worship for All Saints Day (Nov. 1 in the Western Christian tradition), held on the evening of Oct. 31.

So where or how did this observance get connected to jack-o-lanterns, ghosts, things that go bump in the night, and trick or treating? That connection comes from popular festivals already happening in many cultures around the midpoints between a solstice and an equinox, sometimes referred to as “cross-quarter days.” Some cultures understood these as transition times, where the lines between realms may become the thinnest.

The Celtic festival of Samhain fell at the cross-quarter day between autumn and winter, between warmth and cold, between harvest and dormancy for the earth, and so, metaphorically, between life and death.

Christian missionaries and bishops, particularly in England and parts of Western Europe, had concerns that some of these practices and beliefs ran counter to the Christian understanding of the resurrection of the dead. Beginning in the eighth century, the church added prayers to Christian masses, remembering the dead and anticipating their resurrection. These were some of the first prayers connected to celebrations later known as All Saints Day and All Souls Day.

All Saints and All Souls was a distinction between prayers for those the church had specifically designated as saints because of their particularly holy lives pointing dramatically to Christ at work in them (All Saints) and prayers for all within the church who had died within the past year (All Souls).

As United Methodists observe All Saints today, since we have no “official saints,” we combine All Saints and All Souls into a single observance. This celebration in the church accents our understanding of holiness in this life and our hope for resurrection in the age to come.

Cultural Halloween celebrations in the communities in which many of us live have continued to evolve alongside the church celebrations. Many local churches offer safe alternatives to traditional door-to-door trick-or-treating. Others focus more on giving than receiving. Collecting for UNICEF or giving Fair Trade chocolate are ideas for using the occasion to “treat” or give to others.

These activities need not define or limit our witness to what makes for holiness (becoming one of the “hallows”) in this life, and our hope for the resurrection of the dead and the fullness of life in the new creation in the age to come.

~ This feature was produced by Ask The UMC, a ministry of United Methodist Communications.