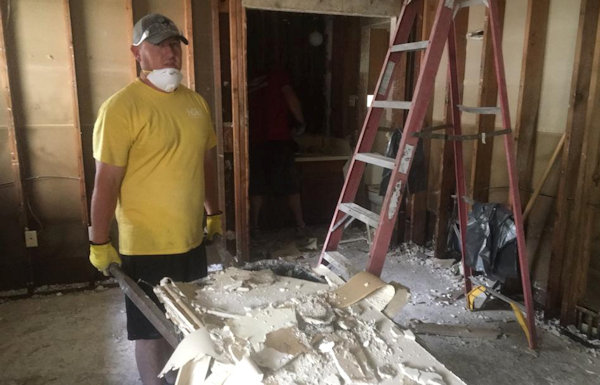 St. Andrew's UMC in Baton Rouge weathered the flood but a third of their members' homes had taken on water. The church mobilized to help. ~Facebook/St. Andrew's UMC

Louisiana United Methodists put shoulders to work and offer shoulders to cry on as neighbors recover from flooding.

August 28, 2016 — “Pray for each other, its important.” The Rev. Tom Howe, pastor of St. Andrew’s United Methodist Church in Baton Rouge, ends every written and spoken message with this request.

Although the need for prayer is always there, Rev. Howe and the members of his suburban church feel that need even more deeply in the wake of recent historic flooding that devastated South Louisiana. St. Andrew’s UMC was spared from the flood waters, but many members, area residents and local businesses surrounding the church did not escape damage.

Howe came to St. Andrew’s in July after serving eight years at Christ UMC in Shreveport. “I watched the children of Christ UMC as they were leaving fourth grade grow to graduating from high school. They are fantastic people, and I am equally blessed now to be serving side by side with the hard working folks at St. Andrew’s.”

The soft-spoken pastor could not have anticipated the recent succession of traumatic events that would strike the city he was now serving. On July 5, Alton Sterling was shot and killed during an altercation with Baton Rouge police officers. Nearly two weeks later, two police officers and a sheriff’s deputy were shot and killed by a gunman from Kansas City. The events threw the city into turmoil as local churches, in concert with Louisiana Conference leadership, worked tirelessly to serve as agents of healing and a voice for justice.

Then the rains came. Six trillion gallons of water fell on South Louisiana as a weather system much like an inland tropical depression situated over the area and just wouldn’t move.

Then the floods came. Flash flooding, combined with flooding from swollen rivers, tributaries and canals brought water to areas that had never submerged before. It is estimated that more than 60,000 homes flooded, and closer to 100,000 have filed for assistance from FEMA.

“Thank goodness for the strong team spirit demonstrated by the folks at St. Andrew’s, and by so many churches in the Louisiana Conference and throughout the connection,” said Rev. Howe. “We are partnering with God to win a victory for God!”

Immediately after the flooding hit, the church went to work. Volunteers have gutted homes, provided lunches to disaster response volunteers, served home-cooked meals to storm survivors (“wherever they are housed”), distributed water and cleaning buckets and used their youth building as a center for everything from supply pickup to a place to bring dirty laundry cleaned by church volunteers.

“A total of 40 church families had water in their homes. That’s about a third of our worshipping congregation. Although the church facility is on a little bit of a hill, directly across the street and one street down it flooded. Because the church was fine, we were uniquely situated to get out into the community to help members and non-members alike,” said Rev. Howe.

One of those families was Mr. and Mrs. DeLaune, the parents of Libby Schackleford, church member and music director for St. Andrew’s. The DeLaunes, whose Denham Springs home took on more than seven feet of water, are also the parents of Jim DeLaune, who is married to Lynette DeLaune, administrative assistant for the Baton Rouge District of the Louisiana Conference. Family members are pictured, above, in the gutted home. “Yesterday, a team from St. Andrew’s worked alongside a group from Trinity UMC in Ruston and teams from Baptist and Morman churches. Mrs. DeLaune hugged everyone, and thanked us with tears in her eyes.”

The church, like so many others, has had to deal with a lack of electricity. Although power has now been restored, this presented obvious challenges in launching relief efforts, not the least of which were communications issues with the loss of the Internet, Email and Facebook.

“Every day, staff members and I would drive into town to access Wi-Fi to send out messages and post on our website and Facebook page. In addition, we have used the first part of worship services as a time for face-to-face communication regarding needs that people in the church and the surrounding community are having. We share information on Louisiana Conference disaster response efforts. Volunteers sign up to muck houses or provide meals. And we hear testimonies—the heartbreaking stories of folks who have suffered and lost so much.”

Rev. Howe has observed that some church members that have not been active recently have communicated with church staff, wanting to help with the response. “They’ve offered to make meals or to help muck out a home.” This crisis, in certain ways, is “bringing people back into the life of the church. They just want to help.”