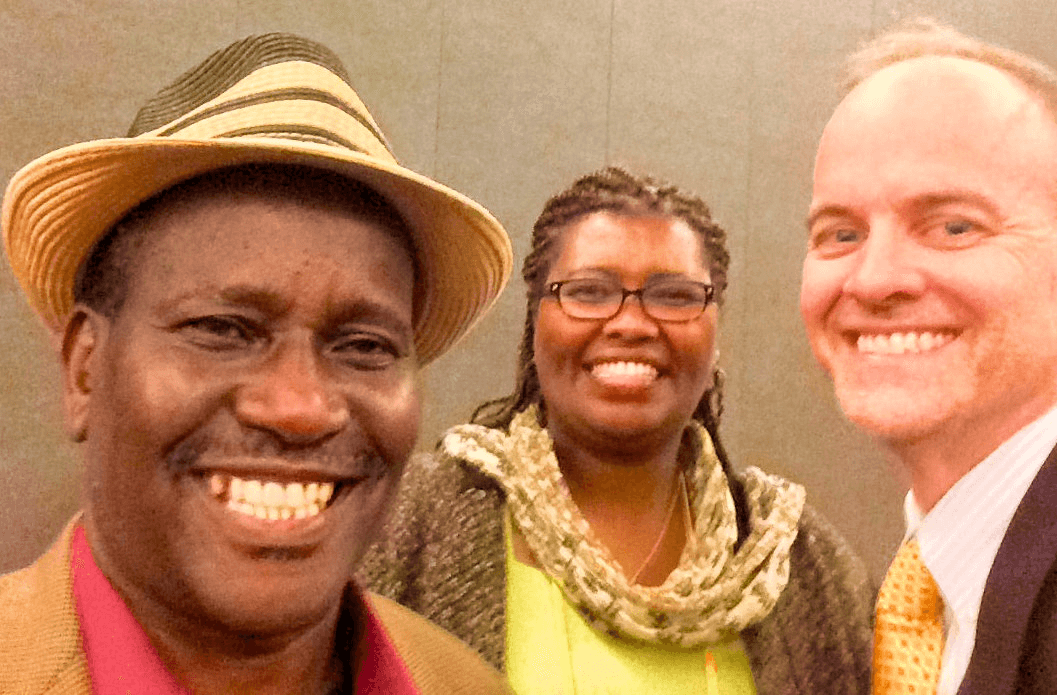 Matt Hook (r) with his friends, the Revs Anne and Harun Gatobu, serving as translators from English to Swahili for delegates from Kenya, Zimbabwe, and DR Congo. ~photo courtesy Matt Hook

A clergy delegate serving in southeastern Michigan reflects on what’s newsworthy on the world stage of General Conference.

In reflecting on the news from General Conference 2016, I remembered something I heard Mitch Album share at a forum years ago: for something to be “news,” it has to have some sensational quality to it, or else it isn’t news. Before attending General Conference, I had only read news about it.

NON-NEWS:  Now that I am on site, I am experiencing, first-hand, daily non-news-making events, which themselves are pretty spectacular. For example:

NEWS: IN LIVING COLOR
Yet in some ways, the whole of General Conference is news. Where else would you hear a gospel choir from Copenhagen, Denmark sing the way they did? Mix that in with bishops preaching powerfully, languages one after another coming and going in worship, in the lobby, and at restaurants surrounding the conference center. So maybe it is news. Where else would you witness this many people from this many places all meeting in prayer, worship, and discernment over the impact our faith has on people’s lives?

NON-NEWS: WESLEY’S WORLD PARISH
John Wesley, in England in the 1700s, partly in response to being banned from preaching in Anglican churches, went to preach in the fields. He said “The world is my parish.” General Conference 2016 is giving witness to what I’ve been reading in the textbook, “Invitation to World Missions” by Dr. Tim Tennent. He writes about megatrends of the 21st Century affecting global missions. He points out how the center of Christianity has shifted from the Western world to the Global South or Majority World, as it is called. The cross-cultural sense of mission has moved from a “West Reached the Rest” mentality to multiple sending countries reaching multiple other countries, including the United States!

NEWS: ON RULE 44
One more piece of news. The delegates seemed frustrated the last two days because of the time it took to adopt the rules for General Conference, particularly Rule 44. This was an attempt to bring an additional way of working through issues that involves small group dialogue rather than traditional legislation means only. I think because it was announced in advance that it could be used to discuss the more controversial issues of human sexuality, lines seemed to be drawn over the issue between progressive delegates and evangelical delegates.After many speeches for and against Rule 44, its amendments, and a proposal to delay the use of it until the 2020 conference, it was voted down. There was a large sense of deflation in the room among many people as well as a sense of resolve among others, though no one is talking much about it. I was impressed how it was handled very carefully by the presiding bishop, who did her best to hear from as many voices as possible while seeking to move us forward as a body.

NON-NEWS: CONGO IN COKESBURY
In the midst of things happening, I visited the very large Cokesbury Bookstore in the exhibition hall. While I was there a man from South Congo was seeking to find a one-volume preaching commentary that he could actually take to Congo and use to help train up the preachers and pastors there. With the growth of the church in Congo, the need is great! Sadly, we could not find any one-volume commentaries amidst the whole display. It made me wonder if we would be even more well-served to increase the emphases and resources on Bible study and preaching in the UMC. I’m still on the lookout for a local bookstore for him. And in the meantime I shared a couple websites that I’ve found helpful. I would ask you to pray for Rev Itela Laurent as he seeks to equip the men and women in South Congo God has called to minister and preach there.

Just in these first three days, I treasure the opportunity of these conversations, being together with the “Michigan Methodists,” (Detroit and West Michiganders), and the opportunity to witness the United Methodist Church in all of its news-worthy and non-newsy glory.