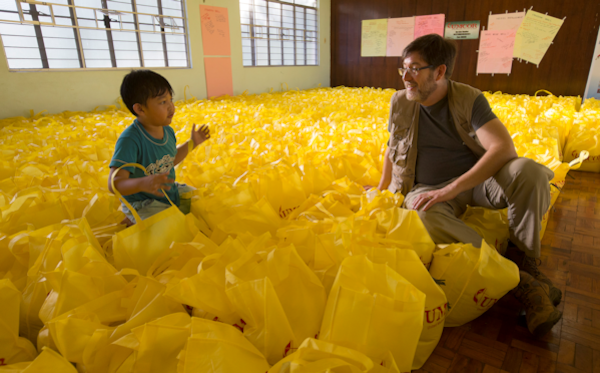 The Rev. Jack Amick was on the scene in the Philippines with bags of relief supplies. Some 1,500 family rations were readied by UMCOr for transport to survivors of Typhoon Haiyan. ~umcor photo

One Great Hour of Sharing is now UMCOR Sunday and this year it is set for March 11.

UMCOR Sunday (formerly One Great Hour of Sharing) is what allows UMCOR to act as the arms and legs of Christ’s church, moving toward the most vulnerable in their darkest days. Convinced that all people have God-given worth and dignity—without regard to race, religion or gender—together UMCOR and its supporters are assisting those impacted by crisis or chronic need.

UMCOR will be able to offer aid in Jesus’ name to those who suffer because United Methodists give through UMCOR Sunday. Generous giving to that special offering pays the administrative costs of UMCOR and allows all other donor dollars to respond 100% to designated needs.

Speaking of designated needs. Michigan has given … in 2017 Michigan United Methodists gave over $1.2 million to domestic and international disaster response through the United Methodist Committee on Relief. Michigan has received … over the past four years a total of $800,000 has been granted to projects in Michigan (the Northwest Detroit Flood Recovery; Flint Water Emergency; and now Midland Flood Recovery).

The Rev. Jack Amick, a clergyman from the Detroit Conference and Director of Sustainable Development for UMCOR, describes how dollars given to UMCOR make a difference.

“The three main humanitarian principles that undergird all our work are that the dignity of disaster survivors should be maintained, that we do no harm, and that we serve with impartiality.” Amick calls well-implemented humanitarian assistance, “sacramental, a physical reminder that God loves all.”

According to Amick, UMCOR is in the abundance business. “We’re told that we will receive a full measure, pressed down, shaken, and flowing over … are we prepared to provide those who suffer that same kind of abundance?” he asks.

UMCOR response begins with the vulnerable in a community, whether than community is Midland, Michigan or Manila, Philippines. “In the story of the Good Samaritan,” Amick concludes, “Jesus reminds us that our prime goal is to help people, without regard to religion or nationality.”