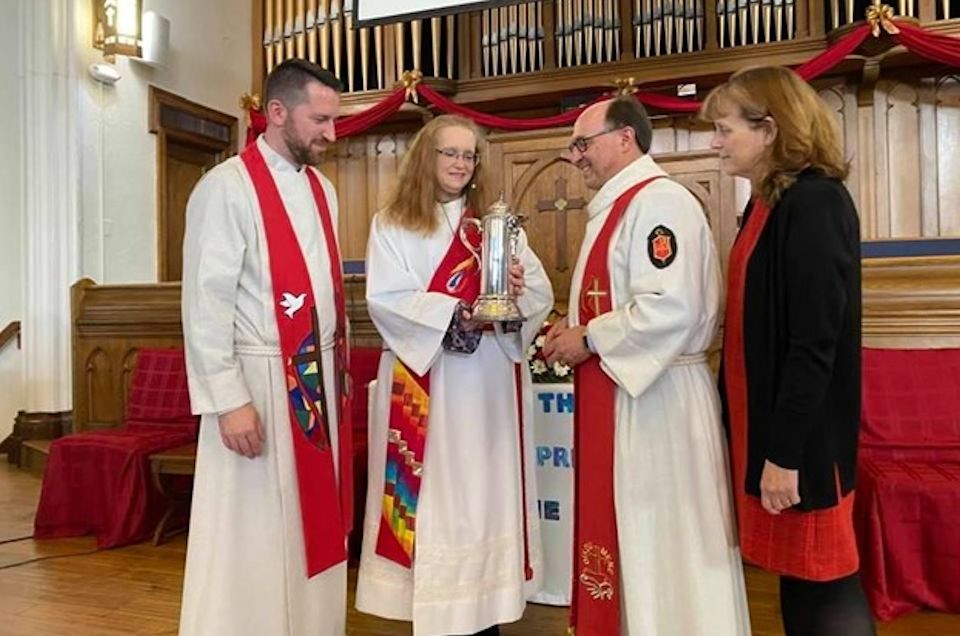 (L to r) The Rev. Dan Hart, Deacon Alicea Williams, Bishop David Bard, and Julie Bard admire a sacramental pitcher dating back to use in the Green Church from 1882-1926. ~ photo courtesy Sheila Strunk

Michigan was not yet a state when First Methodist Church in Mount Clemens was founded. Today they celebrate 200 years of making disciples and transforming the world.

On Sunday, October 17, 2021, First United Methodist Church of Mount Clemens, MI celebrated its amazing history, gave thanks to God, and embraced future hope during a worship service to commemorate the 200th Anniversary of its founding.

Among the many church and community attendees for the landmark event were: Bishop David and Julie Bard, Congressman Andy Levin, Mount Clemens Mayor Laura Kropp, Clinton Township Trustee Michael Keys, and State Representative Bill Sowerby. Multiple civic proclamations were received and read. The celebration booklet listed 48 persons who have been members for 50 years or more. Church member Shirley Champion tops that list with 78 years of faithfulness dating back to 1943.

Christian Clemens, the founder of Mount Clemens, came to the area 26 miles northeast of Detroit in 1796 as part of a surveying venture. He purchased property along the high banks of the river in 1801 and plotted the village in 1818.[2] According to Wikipedia, “On January 15, 1818, Michigan Territory Governor, Lewis Cass, signed a proclamation establishing the County of Macomb, named after General Alexander Macomb, hero of the War of 1812. Three months later, Governor Cass named Mount Clemens the County seat and appointed Christian Clemens Judge of the County Court.”

The History of First United Methodist Church of Mount Clemens, published for the 200th Anniversary, remembers the Rev. John Kent in 1820 who preached on the site of the Old Moravian mission and met with believers in the home of Christian Clemens. They later met in the courthouse. The Sherriff was opposed to the recognition of any religion and locked the courthouse doors, but John Stockton broke the doors open to let believers inside.

Sheila Strunk, First UMC member and chair of the eight-member 200th Anniversary Celebration Committee, observed that when the church began officially in 1821 Michigan was not even a state but a territory. The City of Mount Clemens had not yet been founded. James Monroe, fifth President of the United States, was in his second term. By January 26, 1837, the date that Michigan finally became a State and Mount Clemens was incorporated as a village, the church was already 15 years old.

On January 1, 1821, the church was officially commissioned and three charter members, Susan Connor Cady and Mr. and Mrs. Robert Little, were received. These families continued in membership for generations. The first pastor, the Rev. Platt B. Morey, was sent to serve the area from Ohio in 1821. He took sick and died in December of 1821 in his first year of service. Morey was cared for in the home of Mrs. Sally Noble, another of the early members of the congregation. Morey was the first Methodist minister to be buried in Michigan soil.

The Mount Clemens Methodist congregation organized its first Sunday school classes in 1823 and began a Sunday school library that made books and magazines available to the public. Mount Clemens did not have a public library of its own until 1865. Among the early periodicals circulated from the library were two of special interest and high quality, “The Christian Advocate”[3] and “The Ladies Repository.”[4]

By 1835 the congregation had grown to the point that a decision was reached they needed their own church building and Christian Clemens donated the land for the first Methodist church building at the corner of New Street and Pine Street. Six years later in 1841, the first church was built at a cost of $700, which is equivalent to $22,000 today.

The church’s pastor from 1847-1848 was the Rev. John Russell. Russell became a leading advocate for prohibition during the 1870s and helped organize the Prohibition Party. He was its first National Committee Chairman and was the party’s vice presidential running mate for James Black in the 1872 United States presidential election. As a journalist, Russell published the Detroit Peninsular Herald as the first prohibition newspaper. [5]

In 1849, the Rev. Seth Reed made a quick decision to purchase and move the growing congregation into a larger and more centrally located church building. Reed arranged to buy the newer building from the dissolving and debt-shackled Presbyterian congregation while at the same time selling the smaller and older Methodist building to the Catholics. That sale covered all expenses to purchase and move to the newer building.

In 1880 the growing Mount Clemens Methodist congregation decided to build its next home on the same location. This new building had an auditorium that could seat 400 with another 80 in the gallery. It was dedicated on November 5, 1882, featuring a 90-foot bell tower, and cost $7,000. The church bell pealed for weddings, rang quickly for fires, tolled for funerals, and called people to worship on Sunday mornings. This church building was originally white but over time the clapboard siding absorbed minerals from the nearby mineral baths and took on a green hue. Finally yielding to reality, the church was painted a dark green and is remembered by congregants as “the green church.”

The Rev. Joseph F. Berry pastor for the Mount Clemens congregation in 1879 later served as the Associate Editor of the Michigan Christian Advocate from 1885–90 and as Editor of the Epworth Herald, the official publication of the Epworth League, from 1890–1904. He was elected in 1904 and served as Bishop in the Genesee Conference around Buffalo, NY for eight years and in the Philadelphia, PA area until his retirement.

In 1894 the Rev. George Kennedy became the pastor of the Mount Clemens Methodist Episcopal Church and was remembered for leading the successful effort by the church in 1896, following the construction of Mount Clemens’ first baseball park, to persuade the city and county officials to prohibit the playing of baseball on Sunday out of respect for the Sabbath.

The congregation was selected to host the meeting of the Detroit Annual Conference in 1898 and again in 1932.

In 1924 the Methodist Men’s group chartered Boy Scout Troop 74 which continued to meet and positively shape the lives of young men in the church and community for 60 years.

Another doubling of church membership led to selling the Green Church in 1925 and constructing the present church building at 57 Southbound Gratiot Avenue near Cass Avenue in Mount Clemens. The building was dedicated in 1926 and cost $110,000.

The congregation’s history reflects the issues affecting society. During the great depression in the United States from 1929-1941, the church struggled to meet its financial obligations. They found help to survive by renting space in its Fellowship Hall to a local car dealer. Cars were brought in to display through the coal chute!

In 1965 when the nation was roiled in conflict over the Vietnam War, the Rev. John Jury, a fiery orator, was appointed to the church as pastor and strongly opposed the war even though many airmen from nearby Selfridge Air Force Base attended services. Some withdrew their membership and on Jury’s first day in the pulpit, picketers marched in front of the church.

In its first two centuries, First United Methodist Church of Mount Clemens has been served by 103 ordained pastors and deacons. The Rev. Dan Hart and Deacon Alicea Williams are currently appointed to serve the church. The congregation honors multiple people who have been raised in faith in the congregation and have gone on to other ministries. One son of the church is the Rev. Brian West who currently serves as pastor of Grand Blanc United Methodist Church.

A new fish sculpture in honor of the 200th anniversary and remembering Jesus’ invitation to Andrew and his brother Simon Peter to follow him and become fishers of people (Matthew 4:19) stands outside the church as a reminder of the United Methodist mission to make disciples of Jesus Christ for the transformation of the world.

In his anniversary message to the church during the service of celebration, Bishop David Bard remembered the history shared by members of the church including wars, pandemics, depression, changing political landscapes, and invention. He challenged the congregation to hold the idea of service and love as the norm for greatness and to march to the beat of a different drum. Inspired by Christ, the church is called to be a people of love.

The current Pastor, the Rev. Dan Hart, shared his hopes for the church, “200 years ago as the first three members joined the church, they made a commitment of faith. They did not know the fullness of all that was to come. Today we make the same faithful commitment. With faith in a God that is greater than we can ever know, and in commitment to the lives that are yet to be transformed, we will continue our journey with strength. For all that has been, we give thanks to God. For all that we have today, let us use our blessings to be a blessing. And as we journey forward, may we continue to be open to all that God has in store for us. The choice for tomorrow begins today. Let us pray for our story to be God’s story, and may our branches bear the fruit of the vine that is Jesus Christ.“[6]

[1] Information from Diana Spitnale Miller, President of the Michigan Area United Methodist Church Historical Society and a member of the Michigan Conference Commission on Archives and History,  https://michiganumc.org/history-matters-in-michigan/

[2] Originally called the Nottawasippee, meaning “like rattlesnakes” by the Ojibwe, the river was renamed the Clinton River by the Michigan Territorial Council in 1824 in honor of DeWitt Clinton, Governor of New York from 1817-1823.

[3] The Christian Advocate was a weekly newspaper published in New York City by the Methodist Episcopal Church. It began publication in 1826 and by the mid-1830s had become the largest circulating weekly in the United States, with more than 30,000 subscribers and an estimated 150,000 readers.

[4] The Ladies’ Repository was a monthly periodical based in Cincinnati and produced by members of the Methodist Episcopal Church. From 1841 to 1876, the magazine devoted itself to literature, arts, and doctrines of Methodism, containing articles, poetry, fictions, engravings, and notes of interest to its readers.

[5] Ulysses Grant was elected in 1872 for a second term as President and the Prohibition Party received only 1% of the vote nationally and no Electoral College votes.