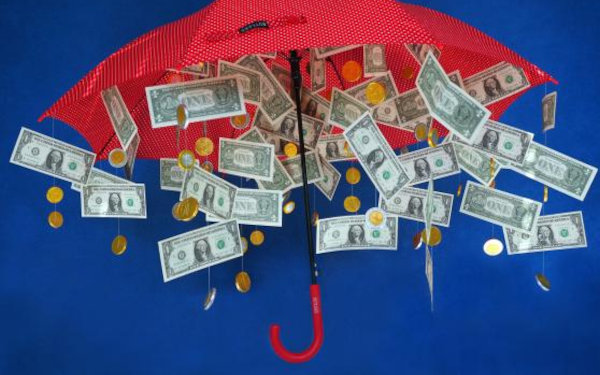 The General Council on Finance and Administration board has formed a new Reserves Task Force to examine just how much general church funds should save for a rainy day. ~ illustration by Hans Braxmeier, courtesy of Pixabay; adapted by UMNS

A new Reserves Task Force considers how much United Methodist agencies should save for a rainy day.

Just how much money should United Methodist ministries put aside for a metaphoric rainy day?

The board of the denomination’s finance agency has formed a Reserves Task Force that is reviewing how general agencies and other general church funds, such as the Episcopal Fund, use their reserves. The task force’s goal is to recommend a consistent missional approach to reserve levels and uses.

What the group decides ultimately could affect future denominational budgets.

“Our perspective coming into this work is that reserves are good, reserves are necessary, and that we have to be accountable and transparent around what we do,” Christine Dodson, the task force’s chair, told agency treasurers and fellow General Council on Finance and Administration board members at the board’s August meeting.

Dodson is the board’s vice president as well as the North Carolina Conference’s treasurer and business manager. In both roles, she said, she often faces questions about either conference or agency reserves.

People see extra money on the balance sheet and wonder what’s up.

“Even when an individual thinks a thing about reserves that may or may not be true, that’s a fair question,” Dodson said. “These are ministry dollars.”

“Our perspective coming into this work is that reserves are good, reserves are necessary, and that we have to be accountable and transparent around what we do.” ~ Christine Dodson

According to 2016 audits, the denomination’s 11 general church agencies that rely on church giving for operations had a total of $402.7 million in reserves.

Of that amount, more than two-thirds — $268.9 million — are restricted net assets. That means donors have directed how and when agencies can use the money such as disaster relief. The rest are unrestricted net assets, which includes what agencies need for continuing operations. The unrestricted assets also include $35.6 million in buildings and other fixed assets that are not readily convertible to cash.

Unrestricted doesn’t mean undesignated. In most cases, each agency’s board has determined how reserves can be used for ministry.

The concept of reserves is at least as old as Genesis. When Joseph advised Pharaoh to set aside produce from seven good years to feed people during seven bad years, he initiated what you might call a grainy-day fund.

These days, United Methodists are more likely to measure their reserves in dollars than sheaves. Still, the need to prepare for skinny times remains.

McLean pointed to nonprofit groups that in the aftermath the 2007-2009 recession found the demand for their services on the rise while revenue was on the decline. He was one of the authors of the “Operating Reserves Policy Toolkit for Nonprofit Organizations,” first published in 2010 to address such challenges.

What counts as the appropriate amount of reserve funds can vary.

The U.S. Internal Revenue Service does not limit how much a nonprofit can accumulate and remain tax-exempt — as long as the nonprofit actually uses its accumulated assets to further its purpose.

“Sometimes you just have to plan for what you can’t imagine.” ~ Chuck McLean

While individuals often receive advice to set aside three to six months in living expenses, the guidance for nonprofits is not quite as simple.

“There is no magic bullet,” McLean said. “It should take into consideration things like how old is the physical plant, what is the probability the boiler is going to go.”

He added: “Sometimes you just have to plan for what you can’t imagine.”

Grant Thornton International, a consulting firm, urges nonprofits to develop reserves policies that are specific to the organization and the risks it faces.

“Whether it’s a set number of months’ worth of operating expenses or a predetermined dollar amount, these generic rules of thumb are relatively arbitrary, not organization-specific, and cannot be ‘proven’ to be adequate,” the firm said in a white paper that the General Council on Finance and Administration shared with church leaders during training last year in Jacksonville, Florida.

Even when there is no crisis, organizations may have other reasons to dip into reserves.

That’s particularly true in the church where giving is cyclical. Rick King, chief financial officer of the General Council on Finance and Administration, told board members that the general church receives 60 percent of its revenue in the last month of the year.

What starts out as net assets in January could be keeping the lights on by December.

Different agencies’ boards also designate the use of reserves for different purposes.

Here are some examples.

The Commission on United Methodist Men has used reserves for repairs to its building and for helping to ensure its 12th National Gathering went off without a hitch.

The Board of Global Ministries has used the funds to help meet health and pension liabilities for missionaries.

United Methodist Communications, which includes United Methodist News Service, plans to use reserves for the messaging and production costs of the special 2019 General Conference and for local-church grants to help congregations respond to whatever the policymaking assembly decides.

“We are very sympathetic to annual conference budgets being cut back and cut back, and we don’t want to be outside the box of what everybody is dealing with.” ~ Rev. Susan Henry-Crowe

The Board of Church and Society is using reserves to fulfill General Conference mandates that come without funding, such as revising the Social Principles to be more globally relevant.

“We are very sympathetic to annual conference budgets being cut back and cut back, and we don’t want to be outside the box of what everybody is dealing with,” said the Rev. Susan Henry-Crowe, the top executive of Church and Society.

“Having reserves is necessary for us to be able to carry out the ministry in really unsettled and uncertain times and be faithful to what General Conference asks us to do.”

Annual conferences also generally maintain their own reserves and use them for a variety of reasons, said Sandy O’Brien, the president of the Annual Conference Treasurers Association. She also is the Louisiana Conference’s treasurer and director of finance and administrative services.

“Here in Louisiana, we seem to experience traumatic weather conditions on an ongoing basis,” she told United Methodist News Service.

“Thus it is always a blessing to have some reserves that can not only be directed to disaster relief and response for immediate congregational needs, but also for continuation of conference-wide ministries.”

At present, agencies provide information about their reserves to multiple entities. Each agency has a board that reviews and sets policies for the use of its reserves. Each also undergoes internal and external audits. Finally, the GCFA board and the Connectional Table, which coordinates agency work, consider reserve amounts in setting each agency’s yearly spending plan.

For now, the Reserves Task Force has requested the policies each agency board uses for handling reserves.

Ultimately, the task force will combine its work with the Budget Advisory Team — which includes members of GCFA board and Connectional Table and helps develop the denominational budget.

Dodson and the Rev. Steve Wood, who serves on both the task force and the advisory team, said the goal is to develop shared terminology and approach to help agency boards plan reserve use.

“This is a new way of collaborating around reserves, and we are just beginning this dialogue,” Dodson and Wood said in a joint statement. “It is our desire to have open dialogue that will lead to understandings that can help direct agency boards of directors as they develop or use their existing reserves policies related to their respective budgets.”