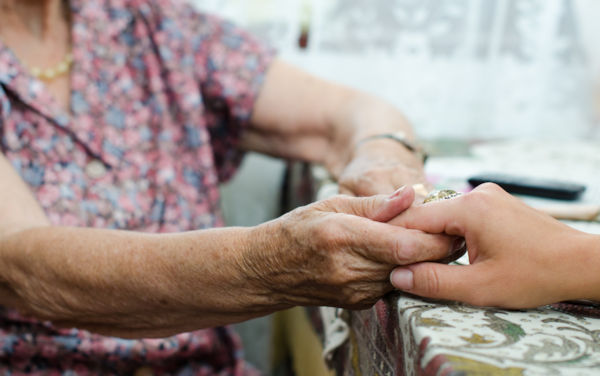 Just over a year ago, three graduate students in Occupational Therapy (OT), moved into Windsor Manor at Clark Retirement Community on Keller Lake. The three are part of a 19-month experiment designed to improve care for seniors. “They are learning a lot about what they will face in their work environment,” says Nancy Hock, the students’ supervisor and a Master Faculty Specialist from Western Michigan University (WMU).

Hock and her WMU colleague, Dr. Maureen Mickus, a gerontologist, are collecting qualitative data on the effects of isolation and aging on brain health. After interviewing the students, as well as the Clark residents, their relatives, and the staff, they will present their findings at a State Occupational Therapy Conference on Mackinac Island in October and at the World Federation of Occupational Therapy in Capetown, South Africa, in May.

“You can’t fix everything, but you can make people more comfortable, sometimes just by listening.” ~ Lori Johnson

The idea for the study came about when Hock, who was aware of a similar program in The Netherlands and—more importantly—who had a mother-in-law in Alzheimer’s care at Clark, ran into Brian Pangle, Clark CEO, at a holiday event. “We got to talking,” Hock remembers, “along with Tim Tuthill (currently Lead Chaplain at Clark), at a holiday event, and went on from there.”

Brian Pangle enthusiastically describes the project as “just the kind of thing Clark likes to be involved in; a win-win situation for everyone.” Because Clark has extra beds above the number they licensed to use for patients, the students are housed for free; there is no financial outlay for their room and board. This is a real boon for the students: Colette Chapp, (age 23, from St. Clair Shores); Lori Johnson (57, from Kalamazoo); and Corey Youngs (26, from Trenton).

What the students are learning is priceless. “This experience has really helped,” reports Corey Youngs. “Not in an obvious, clinical sense like the things you learn in school, but in terms of developing empathy, listening, and simply being a presence.” Colette Chapp agrees, explaining that one of the main benefits of the study is that it addresses core issues of intergenerational communication. “Everybody working with this population is younger than the people they work with,” she points out. “They can’t apply clinical or personal knowledge because everybody doing it has never experienced it.” Lori Johnson reflects that the difficulties have made her realize, “You can’t fix everything, but you can make people more comfortable, sometimes just by listening.”

Each student is expected to log 30 hours of contact time with the residents per week. Initially, this was not easy. Even though the students had been hand-picked by a special panel of WMU staff and Clark residents, the seniors were wary. ”Originally, what surprised me is I wasn’t accepted immediately,” recalls Corey Youngs. “I thought I would be walking into my grandma’s house, and the ladies would pinch my cheek. It wasn’t like that; I was met with skepticism.”

Colette Chapp used her poker skills to break the ice, but it took time. At one point, Youngs even wondered whether he was doing any good at all; but a mid-year survey of the residents resulted in surprisingly positive comments and reignited his enthusiasm for the project. One obstacle was that the students had no particular role in the residents’ lives. They weren’t family members, doctors, or staff.

However, as Lori Johnson notes, each one of the students is “good at initiating conversations and meeting new people.” So, incrementally, visit by visit, the students established trust and made real connections. “At the beginning, our contacts were mostly meals,” Johnson adds. “Now it’s more personal—one-on-one visits, walks, and conversations. Now, if I stop by someone’s room, it’s not a stranger at the door.”

The growing closeness has also brought about another, more difficult lesson. “I’ve never made a friend where I was thinking about their mortality before,” muses Corey Youngs, who lost one of his new friends during this past year. “The experience was powerful. Now it’s always on my mind. I never faced this—my own mortality—until I came here.” Youngs also comprehends why the elderly are often isolated, yet reluctant to open up and connect with anyone. They know all too well that relationships can vanish in a heartbreaking instant.

Because the realization of life’s brevity is a constant at places like Clark, and because Occupational Therapy is a calling that addresses the health and well-being of the whole person, what the students have learned about patience, communication, and compassion will have benefits for years to come. This innovative experiment has made a real difference in the lives of those it touched, both students and seniors. It has undeniably demonstrated a way to improve the care of our elderly.  Perhaps, then, it should become a required internship,

Nancy Hock quotes a resident whose observations summarize the project’s effectiveness: “As one resident told me,” she relates, “When the students are here, at meals with us, it’s lively. There are discussions, laughter, stuff going on. But when the students aren’t with us, there is just the sound of silverware.”