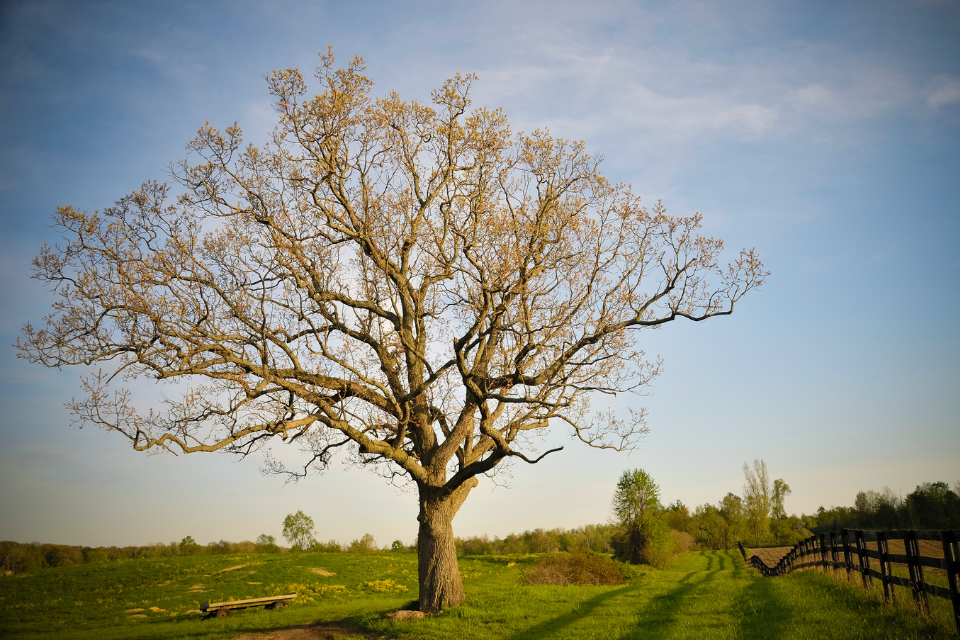 Sondra Willobee believes our answer to “Where are you from?” deepens over time as we consider the family ties and the lands that have shaped us.

“[Jesus] also said, ‘The kingdom of God is as if someone would scatter seed on the ground, and would sleep and rise night and day, and the seed would sprout and grow, he does not know how’” (Mark 4:26-27, NRSV).

I met someone the other day who just moved to Livingston County from Chicago. She and her husband had lived downtown in the Loop for thirty years and wanted to get someplace closer to nature. They chose southeast Michigan. She asked me, “Are you a native of Michigan?”

I answered that I was born in Wisconsin but have lived here all but six years of my life.

So, yes, I consider myself a native.

I could have told her some of the ways you can tell that someone is from Michigan. We pronounce “Mackinac” as “Mackinaw.” We pronounce the town name of “Charlotte” with an emphasis on the second syllable, not like the girl’s name. And Detroiters say, “Dee-troit.”

I could also trot out some of the jokes about Michigan, such as: We have four seasons—almost winter, winter, still winter, and construction. Or, that we design our kids’ Halloween costumes to fit over snowsuits. Or, that vacation means going up north past US-10 for the weekend.

Most importantly, we point to the palms of our left and right hands to explain to people where we grew up or where we’re going on vacation.

I could have told my new acquaintance from Chicago about the perennial argument we have in this state. Do we call ourselves “Michiganians” or “Michiganders”? “Michiganian” has a whiff of privilege about it, whereas “Michigander” honks like a goose. I guess both could be true.

Of course, none of us relative newcomers—white, black, or any of the other ethnicities that now populate Michigan’s cities, towns, and counties—are true natives. That designation belongs to the indigenous peoples we displaced.

My home river, the Huron River, is named for the Potawatomi and Wyandot, who traveled in birchbark canoes to catch fish, harvest wild rice, and barter with other tribes. A signboard beside the Huron River in Hamburg explains that French traders referred to the local natives as “Wendats or Hurons.” The map on the signboard shows Native American villages, encampments, and burial grounds throughout southeast Michigan.*

The sense of being from somewhere is crucial to memory and identity. “Where are you from?” is one of the first questions we ask of a new acquaintance. Our answer to that question deepens over time as we consider the family ties and the lands that have shaped us.

So, I disagree with the sentiment expressed by the old spiritual my dad used to sing while accompanying himself on the guitar, “This world is not my home, I’m just a-passing through.” This world is our home. And, like a 250-year-old elm tree in Elmwood Cemetery in Detroit, our roots go deep.**

My mother’s family is planted deep in the soil of Macomb County. A road is named after us, Inwood Road, and my grandpa, Orlin Inwood, farmed a Centennial Farm on 30 Mile Road. He and his five brothers collected the arrowheads that turned up as they cultivated the soil. After a while, they affixed the collection to a piece of wood that had pride of place in the parlor. When the farm was finally sold, my mother donated the arrowhead display to Stoney Creek Metropark.

On my father’s side, an uncle and two cousins still till the soil in Huron County, the fifth generation of family farmers. They turn the furrows with enormous machines where great-great-grandfather, George Smith, used a horse and plow, setting their sights on the horizon of the flat land that once lay beneath prehistoric glacial Lake Algonquin.

And yet, prompted by that song my dad used to sing, I would also have to say that there is another place that claims us, another identity that shapes us beyond our home soil. Jesus called it the kingdom of God, a place where the values of God reign supreme. A place where everyone has a seat at the feast—newcomers and latecomers, landowners and the dispossessed. Some folks now call it the “kin-dom” of God to give it a gender-neutral label and to emphasize the family feel of this spiritual place. Whatever term you use, it is like a seed planted deep in our souls, or like a home for which we long without even knowing it.

Where were you born? Where have you lived? What landscapes do you name?

Wherever you are from, may you know the fullness of your identity. May you remember the stories of your people, for good and ill. May the soil and trees and rivers, and the beating of your longing heart, tell you who you are.

*Taken from the Michigan History Center signboard along the Lakelands Trail.
**This elm tree, older than the Declaration of Independence, marks the site where Chief Pontiac fought British soldiers along Parent’s Creek in the Battle of Bloody Run in 1763.

The Rev. Sondra Willobee is a retired Elder, last serving as Lead Pastor at South Lyon First UMC. She wrote articles for The Michigan Christian Advocate, FaithLink, and Linktionary, and is the author of The Write Stuff: Crafting Sermons That Capture and Convince (2009). This article is from her blog, “Down by the Riverside,” which is found at www.sondrawillobee.com/blog. Reprinted with permission.