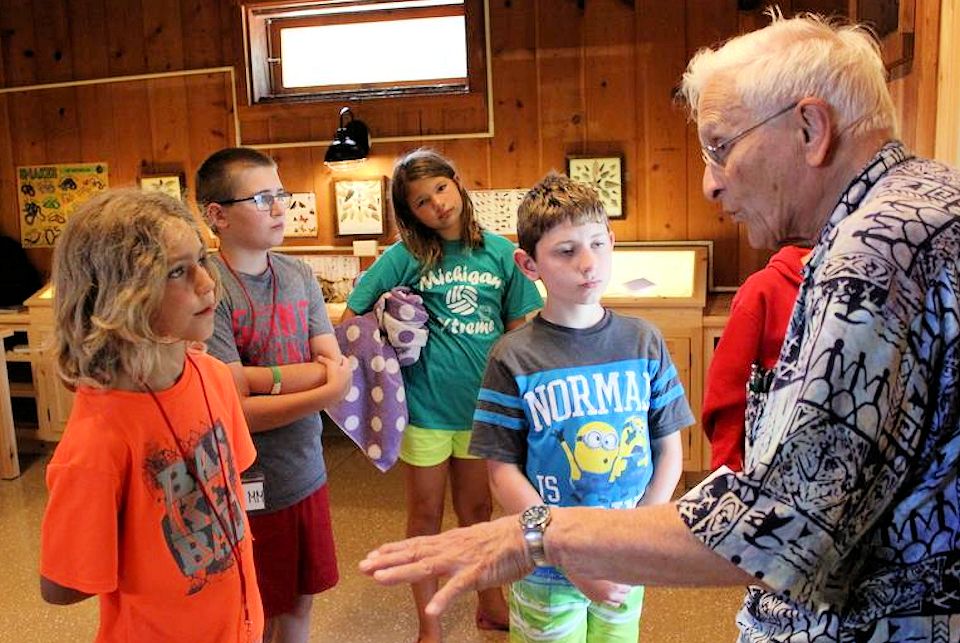 Ted Halsted sharing about the history of Lake Louise, a place he has been part of for the past 87 years. ~ Facebook photo/Lake Louise Christian Community

The Rev. Ted Halsted, a retired pastor from Michigan, was recently interviewed by Wespath as a man with generosity at the center of his life story.

The retired Reverend Ted Halsted has lived a life that many of us would find extraordinary.

Halsted, who is 94 years old, leads a life full of interests and passions. He is an author—if you search Amazon you can find his book. He has traveled to roughly 35 countries. He swims half a mile, three days a week. He and his spouse, Marcy, had two daughters and were married for 52 years before her death in 2005. He also was a diligent saver and investor who has used money as a way to address inequities.

He epitomizes the American Dream and adhered to the John Wesley principle to “earn all you can, save all you can, give all you can.” Halsted said he has donated the equivalent of his entire career earnings as a pastor in the Michigan Conference. He and his spouse donated to causes to address world hunger and endowed scholarships at multiple universities. Recently, he gave a generous donation of stock to the Central Conference Pensions (CCP) of Wespath. Halsted emphasized that he and Marcy embraced a simple lifestyle and that allowed them to be generous with their resources.

Halsted, who lives in a retirement community in Richmond, IN, spoke with Wespath to share his life story and appreciation for CCP.

Q: What prompted you to become a pastor?

A: In terms of the course of my life and what I’ve done, I have to really begin with my parents, mom and dad, Florence and Alfred Halsted. Immediately after the end of World War I, they went to France as Methodist missionaries. … And they were on the staff of a home for 80 boys who were war orphans. … Now that was not part of my life because they went in 1919 and came back in ’26. And I was born in ’27, one year later. Still, their experience greatly influenced me to the extent that I took the same steamer trunk to India for three years as a Methodist missionary immediately after World War II. Just as mom and dad were helping about 80 boys, while I was house father for 70 boys at a hostel. … After that, when coming back to the states, dad became a Methodist minister. And a generation later, I became a Methodist minister.

Q: When you think about highlights of your time in ministry, all of those years. Are there one or two things that really stand out to you as the highlights?

A: Of course, a big one was going to India as a missionary. That really broadened my life in so many ways even though Marcy and I didn’t have a chance to go back as missionaries, we did go back different times. And by the way, I will say about Marcy, there in India she was superintendent of nursing at a Methodist-sponsored hospital. And had a role in the founding of a school of nursing there at the hospital, which since it opened in 1953 has graduated over 800 nurses.

A: One of my great loves is writing. Over those 29 years, (there are) two books I’ve written and published. In Northern Michigan, there’s a lake where the Methodists have a campground, retreat center, a lot of cottages, and all that. I’ve been to Lake Louise about every summer since 1934 when I was seven years old. Dad was the land agent for the association. So, I felt a sense of responsibility since I’ve experienced the entire development of this since 1934 to write The Spring-Fed Waters: The Story of a Lake in Northern Michigan. … And then this Grandfather Tales of Lake Louise. This is for the kids basically going to church camp with the stories gleaned from that book (gestures to Spring-Fed Waters). And now for the recent years, I have just about ready for publication now, the text for my autobiography, Trail Marks: A Memoir. So that’s a big thing. …

In terms of recreational kinds of activities, ping-pong is a big thing I play. Until COVID-19 put a stop to that for a year-and-a-half or so. We’re still not really all the way back on because you can’t keep six feet apart and play doubles. It doesn’t work yet. But I just really enjoy ping-pong. Another big thing has been swimming laps. Of course, COVID-19 interrupted that, too. But in retirement, I had been swimming a half-mile Monday, Wednesday Friday, three days a week, and I had been doing that for over 30 years. That’s been a big thing for me. For ten years or so I’ve been in the Richmond Community Orchestra playing violin.

Q: Why did you decide to donate to the CCP initiative of Wespath? Why was this cause important to you?

A: Well, that was out of personal life experience. In retirement, I’ve been on many mission work projects. Once in Sierra Leone. A couple of times in Zambia. When Africa University was founded, Marcy and I endowed a theological scholarship there. And through the years I’ve had connections with Africa University. One thing it has meant to me is that I just became aware of the extreme poverty of a lot of retired pastors, and I wanted to do something about that.

Something that may be relevant at this point, theologically: Both Marcy and I started tithing in our early teens. That’s carried through, but then it carried through to a point where not 10%, but 100% belongs to God and our role is to be stewards of that.

Over the course of our marriage, particularly in the 60s and 70s, Marcy and I hosted eight different exchange students. Six of them continue to be a part of our family. Basically, I have “daughters” in Germany, Finland, Brazil, and Japan. Six of them, they’re part of the extended family. And actually, most of us got together in 2014 in Munich. Marcy and I had been in all of their homes. They had been in ours. They had been at Lake Louise and all that. But they hadn’t met each other before, most of them. The reunion was a delight. Of course, for their husbands, too. That global family thing is a very important reality. It continues to be for me.

Well, I guess I have to start out (at the beginning). When I had just graduated from seminary and came to Michigan to be a pastor, our conference treasurer, the Rev. Jewell Smoot, planted an idea that really bore fruit. He said, “Hey, when your monthly bill comes to make a payment to the pension fund, instead of just paying that, pay double each month because it will really build up over the years.” And so we did that and that was an important thing. Another thing and this would be right back in that same period, maybe late 20s, early 30s, Marcy and I decided to make a payment to ourselves each month for a nonexistent house. That worked out for us. Except when we retired, well, we could have paid cash for the house, but it was more profitable to leave the money invested and get a mortgage, a low-interest rate, for the house. Those are some things along the way. And then we were the beneficiaries of what happened in the stock market, starting about 1967.

Having lived this long and having had this many opportunities to give for all these years, I can say that over the years we have given away as much as the total that we received in pastor salaries over all my ministry.

~The Rev. Ted Halsted served churches in the Detroit Conference from 1956 to 1980. He retired in 1992 following six years as the Marquette District Superintendent.

Wespath Benefits and Investments is a general agency of The United Methodist Church. CCP (Central Conference Pensions) provides a steady source of retirement income for United Methodist clergy and surviving spouses in the central conferences outside the United States. Wespath Pension plans are now in place across Africa, the Philippines, Europe, and Asia, and they support more than 3,300 people in retirement. Wespath administers the CCP funds but the program itself would not exist without the thousands of generous donors who have given over $27 million since the program’s inception in 2004.