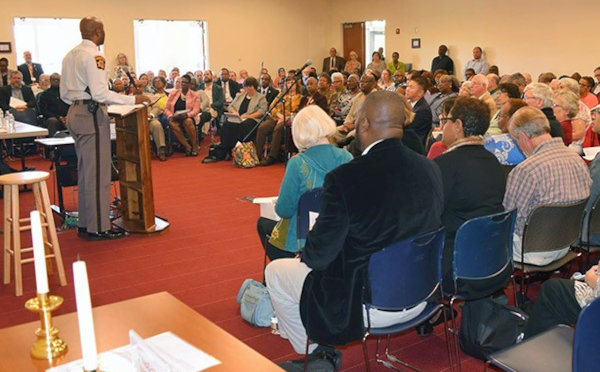 Sheriff Troy Berry of Charles County, who also serves on a state commission to look at best practices in law enforcement, encourages United Methodists not to have tunnel vision around a single issue. He stressed the need to challenge elected officials to express the vision they are casting to spark a dialogue about gun violence and other substantial issues. ~gbcs photo

A panel brings together pastors and law enforcement officers to talk about gun violence.

When the Critical Conversation on Gun Sense was starting at the Baltimore-Washington Conference Mission Center at 1 p.m. on Oct. 17, the Rev. Kay Albury was receiving news that Howard University was on lock-down. There were reports of an active shooter on campus, where her daughter, the Rev. Alexis Brown, serves as campus minister.

The drama and fear of that situation illuminated some of the deep emotions surrounding guns that inspired Bishop LaTrelle Easterling to call together United Methodists for a conversation. Her call hit a nerve: the event was standing room only.

“We used every chair in the Mission Center,” said Sanjeev Christopher, the conference’s coordinator of radical hospitality.

The bishop shared how, when she was writing a response to the recent mass shooting in Las Vegas, she found herself growing weary of the horror. “The word that kept coming to me,” she said, “was ‘again. Did this really happen – again?’”

The Pulse nightclub in Orlando. Emanuel AME Church in Charleston, South Carolina. Virginia Tech. Sandy Hook Elementary School in Connecticut. These are just some of the high-profile tragedies that have been seared into the American conscience. But in the first six months of 2017 alone, there had been 154 mass shootings in the US, and these shootings accounted for just 1 percent of gun violence in America.

Yet even when events become overwhelming or make us weary, Christians are called to act, the bishop said. She reminded those present to never devalue the power and practical witness of prayer and celebrated that social holiness is one of the foundations of United Methodism.

“Our intent is to acknowledge our pain, frustration, fear and sense of paralysis around this topic and discern how we, as the church, can begin to have a meaningful impact in the places God has planted us,” she said.

READ MORE about what these conversation partners had to say about gun sense.