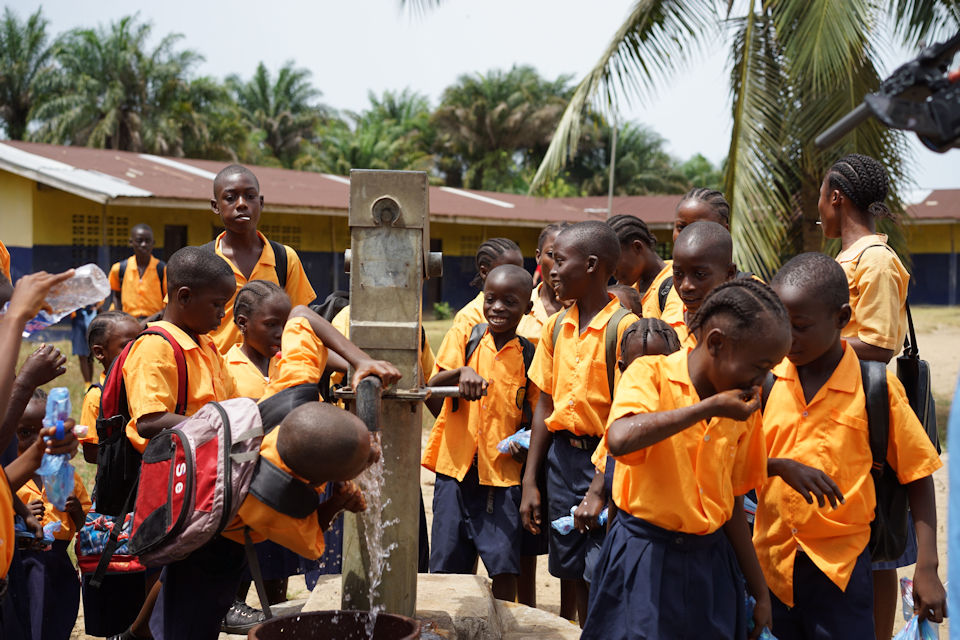 Water for Life has brought clean, accessible water to thousands in Africa. This has meant better health, more economic opportunity for women, and increased attendance in school for girls. ~ photo courtesy Jon Reynolds

The Global Water Justice Summit aims at greater appreciation for water and everyday access to it. The goal is to consider that a missional commitment for the North Central Jurisdiction.

Michigan and its neighbor states are blessed with 21% of the world’s fresh surface water. “That’s what got us thinking, says Jon Reynolds, “that if there is an area in the U.S. that should focus on water justice, it’s the North Central Jurisdiction of The United Methodist Church.”

Jon and colleague Alex Plum, both clergy on the staff of Cass Community United Methodist Church in Detroit, are working together to host a Global Water Justice Summit, January 24-25,2020 at Cass. The third organizer, Jefferson Knight, is the Director of Peace, Justice, and Reconciliation for the Liberia Conference of the United Methodist Church. The theme of the event is, “By Water and the Spirit.”

They are gathering water advocates, experts, and engineers from across water insecure parts of the world and the U.S. Midwest. Their hope is to share information, float ideas, and inspire enthusiasm toward the development of a United Methodist led strategy for water security. What sets the event apart from other worship and workshop focused gatherings is intentional collaboration toward the desired outcome; a roadmap for mission partnerships and investment of the North Central Jurisdiction with global neighbors.

It will be a time for all present to understand their own “water footprint” in a world where close to one billion people lack access to consistent safe drinking water.

Reynold’s interest in water began when he was serving at St. Paul’s United Methodist Church in Rochester, MI. The congregation was involved in a water project in Liberia. “That’s when I got acquainted with Jefferson Knight,” Jon explains. Earlier this year Jon and Jefferson connected again. “Jefferson was struggling to find support from international partners after what happened at the 2019 General Conference,” Reynolds says. “I believe that international support for a basic human right like water shouldn’t be contingent on politics,” he adds. “The gospel clearly tells us to give water to those who are thirsty.”

Plum’s interest in water began with a Michigan focus. He authored a study three years ago from his position on the staff of Henry Ford Health System. “It was a first-of-its-kind exploration of the health impacts on the City of Detroit from imposed water shut-offs.” He asks, “What happens when the city turns off someone’s water because the water bill isn’t paid, because water is unaffordably expensive?” He found that people who had their water turned off got sicker than those who didn’t. Further, he learned that those whose water was turned off contracted more water-borne illnesses.

“So, I became interested in how access to water, among poor and vulnerable people, relates to health,” Plum says. “That’s my work at Henry Ford and part of my work as a deacon to help the church respond.” Like Reynolds, Plum also believes the time is right for United Methodists to unite together in mission. “In light of what’s happening right now in The United Methodist Church, there is a need for us to remember that there are many missional projects that connect us in the name of Jesus Christ.” He adds, “We have a responsibility to ourselves and the next generation to work together even if we don’t think and act alike.”

“Jefferson Knight is one of the most incredible people I’ve ever met,” Jon says. Reynolds has worked alongside Knight in his role as Chair of the Liberia Covenant Partners of The Michigan Conference. “Jefferson has helped provide hundreds of wells and pumps in Liberia that have provided water for thousands.” Toilets and sanitation are other facets of Knight’s work done through an Advance Special called Water For Life # 3020811. Reynolds remarks, “When Jefferson talks about the things he has accomplished, it makes me wonder what I’m doing with my life! I am inspired.” In addition to helping organize the summit, Knight will also be a key presenter.

Jefferson’s comment, “I’m not the only person in the world doing great things with water,” was the inspiration to expand the Water Summit to include numerous developers from several continents. Water projects in Africa will be well represented by persons from Liberia, Zimbabwe, DR Congo, Kenya, and Sierra Leone. Persons from Guatemala and the United States are among the presenters, including Flint, Detroit, Chicago, and Toledo. There will also be a Native American presence. New advocacy and mission are sure to emerge from such a mix of international leaders. Small groups, panels, and break-out sessions will offer opportunities for networking, brainstorming, and relationship-building. See the schedule details here.

Both Jon and Alex stress the importance of “bi-directional learning” that can take place in a multi-cultural context, where people move outside their usual framework. Jon recalls, “When Jefferson stayed with us in our house he said, ‘Does the water always work in the shower?’ That was one of those moments when you take a step back. Then he opened up my pantry, which by U.S. standards is normal. Jefferson commented, ‘You could feed my whole village for a week with what you have in your pantry.’”

“Communities around the world share some things in common,” Alex notes, “and there are ways they are different. At the end of the day, we have a lot to learn from each other.”  He continues, “They give us ideas and we get ideas from them. The church wants to think we are helping poor, sick Liberians by funding education and building clinics. Let’s not forget they have a ton of knowledge and local expertise and have survived without our help for a long time.” Alex hopes that the summit will “help put global partners in the driver’s seat for once.” Jon adds, “We don’t want folks from the U.S. to show up and immediately assume they know everything.”

Why attend the summit?

Reynolds says that the event is not just for global water experts and advocates. “I encourage people to come because they are curious and have realized that they take water for granted. Come to learn more about what to do to help people lead healthier, safer lives.” His main hope is that those who attend will “pause for a moment every time they turn on their shower or faucet to brush their teeth and recognize that what they are doing is not normal for nearly 1 billion others in the world.” Further, Reynolds prays they “take action steps to help people get access to water.”

“Any person who has dipped a toe in a Michigan great lake or turned on the tap and enjoyed a glass of cold water after raking a lawn should come to this event,” Alex says. He wants participants to gain a new perspective. “Anyone who loves a warm shower on a cold Michigan morning does that without appreciating how finite that resource is.” Alex continues, “That person doesn’t realize how many of our neighbors don’t have that luxury because they can’t afford it or the infrastructure has poisoned it with lead.”

The schedule on Friday, January 24 begins with registration at 1:30 pm with recess at 9:00 pm. Saturday’s activities start with devotions at 8:30 am with adjournment at 6:00 pm. Alex notes, “I don’t know if the group will produce actual legislation to send on to the North Central Jurisdictional Conference next July.” He does expect some statements of clarity, vision, and call may be produced that could be passed on to a smaller group authorized to work on legislation.

“What if water became a central missional commitment for the North Central Jurisdiction?” Plum asks. Such a commitment to water security and to the protection of the universal human right to clean water would have impact around the world. As Jon Reynolds observes, “When you pull on a  string somewhere, it pulls on the strings everywhere.” It’s time to pull some strings on behalf of global water justice.