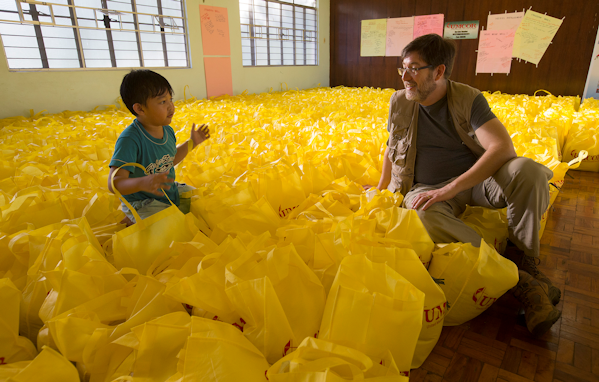 The Rev. Jack Amick visits with Sanyelle Eduarte, 7, atop bags of relief supplies at the offices of the United Methodist Committee on Relief in Manila. Amick heads international disaster response for UMCOR. These supplies were distributed to the survivors of Typhoon Haiyan in the Philippines. ~umns/Mike DuBose.

The Special Sunday Offering known as One Great Hour of Sharing continues with a new name … UMCOR Sunday.

The United Methodist Church has renamed a popular special Sunday observance that includes an offering to cover disaster relief costs.

“UMCOR Sunday” replaces “One Great Hour of Sharing” within the denomination. The change was approved by the church’s legislating General Conference, meeting May 10 to 20 in Portland. UMCOR is the United Methodist Committee on Relief, a major Protestant humanitarian agency that is part of the General Board of Global Ministries. It was founded more than 75 years ago.

UMCOR’s work of alleviating human suffering around the world includes disaster relief and supplies, disaster risk reduction, and humanitarian development. It also relates to the Global Ministries’ unit on health.

UMCOR operates in the United States in collaboration with relief teams organized by annual (regional) conferences. On the international level, it works through partner organizations and, at times, its own country offices, depending on need. UMCOR currently has five country offices, in Sudan, South Sudan, Zimbabwe, Democratic Republic of Congo, and Haiti.

“One Great Hour of Sharing” is a traditional ecumenical designation for an offering to cover administrative costs for relief and development efforts. It will continue to be used by other denominations.

UMCOR has no source of revenue for administration except from One Great Hour of Sharing (now UMCOR Sunday). One hundred percent of gifts designated to UMCOR go to the cause stipulated. UMCOR receives no money from the apportionments paid to the general church by congregations.

“This action aligns our language with the image and reality of support for UMCOR,” said Thomas Kemper, chief executive of Global Ministries. “UMCOR is one of the most well-known and effective ministries of our church, and I think our membership will welcome the name change for the annual day to celebrate and support this dynamic work.”

The decision on the name was not debated on the floor, but was approved on a “consent calendar” of items approved with large majorities in legislative committee.

The new UMCOR Sunday will be observed annually. It is observed on the fourth Sunday of Lent, but can occur at other times if a congregation wishes.