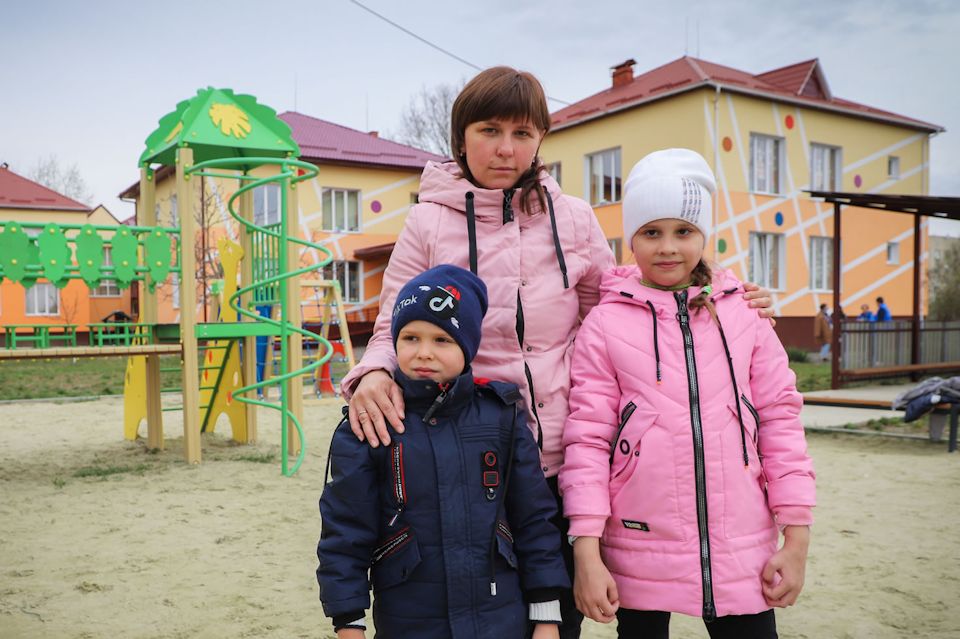 Irina and her two children in the playground at the shelter in Batiovo, Ukraine. ~ photo by Dániel Fakete/Okumenikus Segélyszervezet

This report tells how UMCOR and partners — International Blue Crescent, Hungarian Interchurch Aid, and others — are providing food, shelter, and relief to those suffering in Ukraine.

Irina and her two children, Mathou (age 5) and Tapolina (age 8), evacuated from the eastern part of Ukraine as invading Russian forces began a bombing campaign on their village in the Donetsk region. As in many Ukrainian families, her husband, a history teacher, stayed behind to join the Ukrainian defense forces. At first, they told the children the sound of bombs was just distant thunder, but as the Russian missiles got closer, the children began screaming.

“The children didn’t want to leave the shelter of the furniture. They ate under there. They were really very, very scared. That was when I realized that it was time to evacuate somewhere,” Irina said.

She didn’t even know where to go, other than west to Lviv. On foot they tried to get to the evacuation point, but when Russian forces started shelling, they had to hide. It took multiple tries and getting into a car with Ukrainians they didn’t even know, but they made it to a railway station and out to Lviv. From there, they continued west.

They finally reached Batiovo, Ukraine, in Transcarpathia, not far from the Hungarian border. There they found a refugee shelter supplied by ACT Alliance partner Hungarian Interchurch Aid (HIA), an ecumenical humanitarian agency of Protestant and Orthodox churches. They took shelter with about 90 other displaced Ukrainians and received beds, water, shower facilities and three meals a day. The playground outside allows Irina’s children to play with other Ukrainian children, away from the sounds and devastation of the missiles.

The Batiovo refugee shelter is one of more than 120 centers supplied with food, water, hygiene products and household appliances by HIA. The United Methodist Committee on Relief (UMCOR) is a partner in this work through its support of ACT Alliance relief work in Ukraine as well as in countries receiving refugees outside the country. UMCOR has so far contributed $1 million to ACT Alliance relief efforts. In addition to the HIA outreach, Lutheran World Federation (LWF) and Swiss Church Aid (HEKS/EPER) conduct similar ACT missions in other parts of Ukraine.

Several other relief organizations have been able to increase their work in Ukraine with UMCOR support. In the southwestern part of Ukraine, a long-time UMCOR partner, International Blue Crescent (IBC), reaches people in the Odessa region with food, water and medical supplies. Odessa has been a target of Russian forces attempting to capture territory along the Black Sea. As Odessans evacuate, IBC distributes emergency food rations at the Moldovan/Romanian border in the city of Izmail. UMCOR support provides 75,000 meals as well as a 2-month supply of food staples for 1000 households in this besieged region. IBC also provides medical supplies to Bolgrad and Artsyz state hospitals based on their urgent needs.

UMCOR has released two emergency grants to the United Methodist Church in Ukraine. According to the district superintendent for the Ukraine/Moldova Provisional Annual Conference, the Rev. Oleg Starodubets, Ukrainian Methodists continue to serve refugees and people struggling in areas under siege.

“Since the beginning of the war, our church has organized four gathering points to receive refugees (Onokivtsi, Lviv, Kamianitsia, Uzhgorod) and in total, they are giving shelter to about 200 people daily.”

Internally displaced people within Ukraine continue to travel, depending on where the invading forces attack and when they retreat.

“Some of the leaders and members of Methodist churches didn’t leave dangerous locations,” Starodubets wrote in a recent newsletter to supporters. “In the very first days of the war, we sent money to them, so they could buy food and some necessary items in the nearest shops, as they couldn’t move far under the fire and shelling. Our Methodist pastor in Kharkiv city, which is (frequently) under fire, the Rev. Igor Park, hasn’t left the city and he continues to support his parish. We transfer money when postal offices have been working and we are able to send products and medicine to certain places and people.”

The Starodubets family has remained in Lviv, serving the needs of the church and of displaced people arriving there.

Another ACT partner, HEKS-EPERS, reaches people in the Kharkiv region with emergency food, water, hygiene and medical services, even as Russian assaults continue.

The Bishop’s Tithe of 10% of the total offering at The Michigan Annual Conference provides humanitarian assistance to the Ukrainian people through Advance #982450, UMCOR International Disaster Response and Recovery. This fund provides direct assistance to those in Ukraine as well as assistance to Ukrainians fleeing to neighboring countries. Learn more.

Zaporizhzhia, a city in southeastern Ukraine that remains under Ukrainian control, has taken on many people displaced from Mariupol and other besieged cities. HIA recently sent workers there with shipments of food and water. In addition, UMCOR provided a grant to the City Aid Center, which provides food and other supplies to a shelter program in Zaporizhzhia and another in Mukachevo, Ukraine.

UMCOR partnered with the Arlene Campbell Humanitarian Foundation and Ohio Health to gather and transport three shipments of medicines and medical supplies worth $1 million to three hospitals in Kyiv.

UMCOR partners working in Ukraine and across Europe have all described the refugee and internally displaced populations as “fluid.” Stations and shelters set up in one place may have to be quickly broken down and moved to another. Refugee operations across the borders of Ukraine describe ebbs and flows of activity, depending on where military aggression advances and where it retreats. Some Ukrainians have decided to return, even if it means they return to destroyed villages with little infrastructure left. Others receive word from relatives in Ukraine that the Russians have moved out. Irina, in Botiovo, worries every day about her husband and her parents, who refused to leave their home. She is a nurse, and she knows her skills will be needed. She wants to return home.

After Russian forces retreated from the suburbs of Kyiv, in places like Bucha, HIA workers visited at the end of April, bringing with them much needed food and water and other basic supplies, but also with their presence.

The horrors endured by the people trapped in Bucha and other communities surrounding Kyiv during occupation are still being discovered, yet, even there, people of faith find a way to survive and way to serve. One young woman who came for food and water thanked the Hungarians for their presence. She said that she and her mother hid during days of occupation in the cellar of their house with their dog, who kept them warm. They had only canned food and potatoes.

“Thank you for coming to us,” the young woman exclaimed. When she picked up her food box, she invited them to come meet her mother. And then, in typical Ukrainian warmth, she said, “Come see us also when this is all over. We will wait for you with a table fully set, you’ll see what Ukrainian hospitality looks like.”

Christie R. House is a consultant writer and editor with Global Ministries and UMCOR. Individual accounts in this article come from HIA, ACT Alliance and the Rev. Oleg Starodubets.