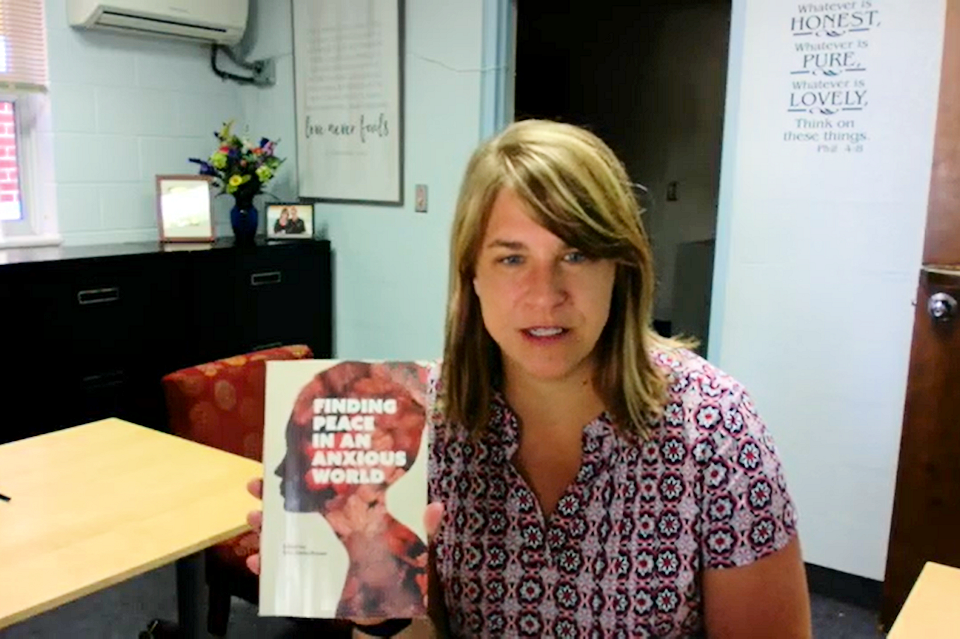 Devon Herrell, then pastor at Big Rapids First UMC, led the spiritual growth study for Mission u 2020 from her office after the in-person schools were cancelled due to the virus. ~ video screen image from third session of Finding Peace in an Anxious World."

United Methodist Women Mission u events moved online in 2020 to help participants prepare for faithful living and transforming the world in the midst of a pandemic.

In a typical July, the campus of Pfeiffer University teems with attendees of the Western North Carolina Mission u, a transformative education event hosted by the conference United Methodist Women. But July 2020 was not a typical July, and like many Mission u teams across the country, United Methodist Women in Western North Carolina got creative, reimagining the event as a virtual gathering, which they held in the fall.

When it became clear that the COVID-19 global health crisis would make it unsafe for 2020 United Methodist Women Mission u events to take place in person, organizers saw an opportunity to try something new. The national curriculum shifted to focus on one study, Finding Peace in an Anxious World, edited by Erin James-Brown, a topic more timely than ever expected.

“Who would have known when the book was being written that it would be the study at United Methodist Women’s Mission u events when we’re in the midst of a great pandemic?” asked Sandrea Williamson, president of the Northern Piedmont District United Methodist Women as she opened up the first session of the 2020 Western North Carolina Mission u.

Focusing on the Serenity Prayer, Finding Peace in an Anxious World helped guide study participants through anxiety, worry and fear and move toward God’s peace in trying times. Youth and children’s studies on the topic were also available: Managing Anxiety and Managing our Emotions, both by Trudy Rankin and Faye Wilson. To help Mission u and study leaders adapt, United Methodist Women created guides for hosting virtual events and programs and a manual specific to leading mission studies on Zoom. It also offered virtual conversations, Zoom gatherings and Faith Talks with study authors, a Facebook “hub” and supplemental videos for leaders to use in their sessions and for parents and caregivers to use at home.

The idea of mission studies was born at the Ecumenical Missionary Conference held in New York City in 1900, which included participants from United Methodist Women predecessor organizations. A women’s Central Committee on the United Study for Foreign Missions was formed, and the committee began publishing annual studies thereafter.

“We want to know for ourselves the condition of missionary work, the conditions of the peoples. We want to know about the women of all lands,” wrote Mrs. J.T. Gracey, secretary for the Woman’s Foreign Missionary Society of the Methodist Episcopal Church in the report of the conference, who also said, “An informed Church will be a transformed Church.”

The Federation of Woman’s Board of Foreign Missions then organized Ecumenical Schools of Christian Mission a few years later in 1904, which still exist today as Mission u events.

The publication of mission studies remained an ecumenical endeavor for many years, eventually becoming part of the work of what would become the National Council of Churches via the Friendship Press, and then a partnership between the United Methodist General Board of Global Ministries and the Women’s Division. Now the tradition of transformative education via mission studies and learning events continues through United Methodist Women.

The Michigan Conference United Methodist Women usually hosts multiple Mission u gatherings throughout the summer in different parts of the state. In 2020, Michigan offered videos after in-person events were canceled.

“There was a lot of disappointment expressed when the four Mission u events were canceled for 2020,” said Michigan Mission u co-chair Jacki Euper. “After discussing the difficult days our people were facing amid the coronavirus, our committee contacted study leader the Rev. Devon Herrell and received an immediate response from her to create four 45-minute sessions based on the study book, one per week, available for individuals or groups to use.”

Michigan made these sessions available beginning May 12. They can be found at umwmichiganconference.org/MissionuVideos.html

Learn more about 2021 Mission u in The Michigan Conference. Theme is “There’s Far More Here than Meets the Eye.” Both virtual and in-person experiences planned. Feature story coming soon but save dates now.

The Great Plains United Methodist Women offered a virtual Mission u with a morning session, weekend session and evening session on Finding Peace for small groups led by the Rev. Bonnie McCord.

“There was a great mix of Kansas and Nebraska folks and a great opportunity to get to know one another better,” said Barbara Wright, chair of the Great Plains Mission u committee. “The participants had a very positive response to the study. A couple participants suggested that Zoom become a fourth site going forward because it opened up Mission u to people with mobility and travel issues and people who are caretakers of loved ones and can’t be too far from home.”

The Pacific Northwest Conference planned its 2020 Mission u event as an in-person event in July at Wesley United Methodist Church in Yakima, WA. When social distancing became necessary, the Mission u team shifted to encouraging members to study Finding Peace in small group settings, like Sunday schools and book study groups, using the videos provided by the national office.

Deb Avery, dean of Mission u for the Pacific Northwest for 2020, along with fellow study leaders Lyn Rush and Abby Niehaus, created 10 video episodes for Sunday school classes for their home church, Vancouver Heights United Methodist Church in Vancouver, WA.

“We have used multiple video links that families can access,” said Avery. “We are using a format to encourage families to view and discuss together. It proved to be an inspiring time of sharing and reflection. We really appreciate the links to the various resources.”

These videos can be viewed at vancouverheightsumc.org/education.html

Learning for the future

Like Western North Carolina, the Greater New Jersey Conference usually holds its Mission u event on a college campus in July, at Georgian Court University in Lakewood, NJ.

“We go to Georgian Court University for a three-day session,” said Marilyn Powell, assistant dean for the 2020 Greater New Jersey Mission u, of their typical Mission u setup. But the team decided to pivot to a virtual event when it became clear an in-person event would not be safe. “Many of our women who attend are 60 or older, so the last thing we wanted to try was an in-gathering of over a hundred people. So we opted to do virtual.”

The transition was not without its challenges, as videoconferencing technology was still new to many of the organizers, but they took a chance and offered virtual classes in English, Korean and Spanish on Saturdays in July 2020. More than 300 people participated in the study focusing on Finding Peace.

The first event had a few technical glitches, Powell said, but they were worked out. Though they missed being together in person, she said a virtual event offered the benefits of cost savings and reduced travel time and increased opportunity for participation, and she appreciated the video supplements provided by the national office offering overviews of the study and theological frameworks.

The 2021 Greater New Jersey Mission u will also be virtual. Powell said she anticipates offering virtual options even as Mission u becomes an in-person event once again.

“Georgian Court even has livestreaming capability,” she said.

Western North Carolina held its virtual Mission u event Oct. 26-29. Each day focused on a section of Finding Peace: serenity, acceptance, courage and wisdom. More than 250 participants registered, and hundreds gathered together each of the four days over Zoom in sessions led by Williamson.

Handouts and PowerPoints from the sessions were available for download online, and those who couldn’t participate in real time could watch the videos when posted later on the conference United Methodist Women’s website, wnccumw.org/events/mission-u-2020, along with chat excerpts.

“When we realized we would not be able to meet in person at Pfeiffer University for Mission u, we were very disappointed,” said Patricia Moore, dean of the Western North Carolina Mission u. “With everything the nation was going through with COVID-19, the George Floyd murder, political strife, etc., we knew we needed the course on Finding Peace to help us with the anxiety we were all feeling.”

The Western North Carolina team originally planned to hold their virtual sessions the same dates as those scheduled for the in-person events, but they soon realized that wasn’t going to work. Praising the conference webmaster Lynne Gilbert who, in addition to hosting Mission u, hosted the conference annual meeting as well as meetings for the conference’s eight districts via Zoom.

“With God, prayer and understanding, the October date turned out to be perfect for the study,” said Moore. “When we put the practices we are taught in this study into action we become more deeply rooted in Christ.”

This year, 2021, is the 120th anniversary of the first mission study, published in 1901 by the Central Committee on the United Study for Foreign Missions. Finding Peace will continue to be a book Mission u participants study together in 2021, along with Pushout: The Criminalization of Black Girls in Schools, Bearing Witness in the Kin-dom: Living Into the Church’s Moral Witness Through Radical Discipleship and the youth and children’s studies Becoming Peacemakers in a Culture of Violence and Responding to Violence. The 2021 theme is “There’s Far More Here,” based on 2 Corinthians 4:16-18. Many of this year’s Mission u events will be online as Mission u teams continue to keep participants safe in the ongoing pandemic while still bringing people together to learn and grow.

The Mountain Sky Conference has hosted a Mission u in 2021, over four Sunday afternoons in February. More than 273 people of many ages registered across 16 states according to Cathy Speich-Ferguson, dean of the Mountain Sky Mission u.

“We sent out invitations to all of the churches in our conference and to our United Methodist Women presidents and advertised on a national church site listing events. We shared the free event on our conference website calendar and our conference United Methodist Women website calendar,” Speich-Ferguson said. “Our conference normally would have 40 to 70 folks attend a Mission u—mostly retired and older folks—when we met in person. This virtual event has fantastic participation and is easier for folks who can’t travel, can’t get out of the house, have kids, or other barriers to participation.”

While we yearn for the chance to be together in person again, we can follow the example of creative and committed United Methodist Women members to continue offering the chance to transform in our learning, to continue the century-long mission to open eyes and hearts, for, as Irene Barnes stated at the 1900 missionary conference, “Prejudice has to be overcome.”

~ Response is the print and digital magazine of The United Methodist Women. Learn more here.