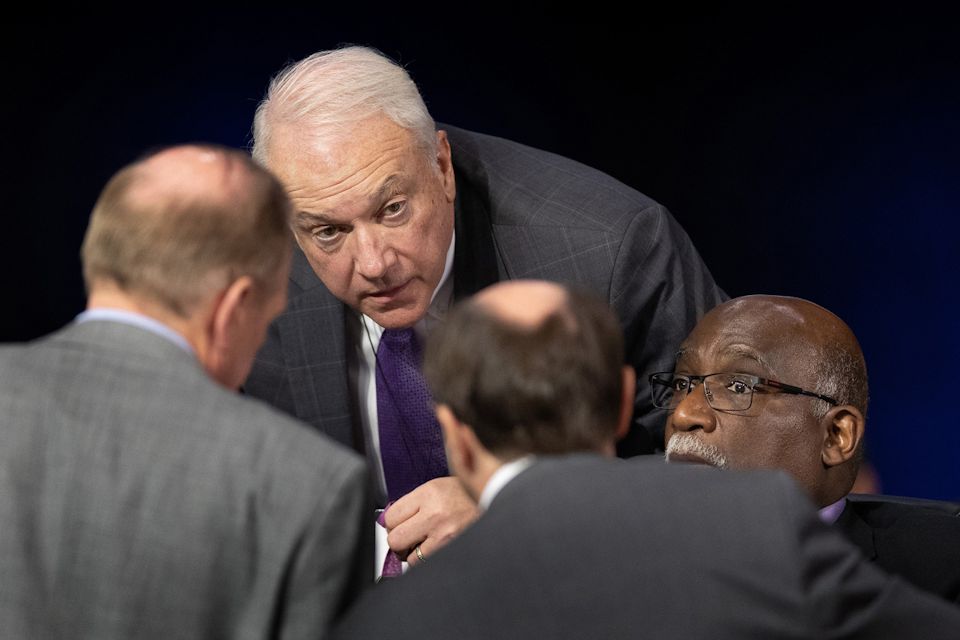 Bishops Thomas J. Bickerton (center) and Gregory V. Palmer (right) confer with colleagues on legislative procedures during the 2019 United Methodist General Conference in St. Louis. Bickerton is the Council of Bishops representative on the Commission on the General Conference. The commission — meeting behind closed doors — reviewed an investigation that found evidence of four ineligible people casting votes using the credentials of delegates who were not present. ~ UM News file photo/Mike DuBose

The Judicial Council has ruled, through Zoom sessions, on part of a spring 2020 docket postponed by COVID. The court issued decisions on three matters from the 2019 Michigan Annual Conference.

The United Methodist Church’s top court will not rule in advance on the constitutionality of proposed legislation that would provide a way for some to separate from the denomination.

In Memorandum 1407, the Judicial Council declined jurisdiction in response to a request from the United Methodist Council of Bishops about the proposed Protocol of Reconciliation and Grace Through Separation.

The protocol legislation will remain in the hands of the next General Conference. The denomination’s top legislative meeting — postponed twice because of the pandemic — is now rescheduled for Aug. 29-Sept. 6, 2022.

The Judicial Council also ruled in Decision 1401 that it was unconstitutional for the Commission on the General Conference to take action between sessions of General Conference by declaring that a paragraph in the denomination’s law book was null and void because of improper voting during the 2019 session of that top legislative body.

Those were among the nine rulings posted April 16 on the Judicial Council’s website. Some decisions included concurrences and dissents from individual council members.

Normally, the Judicial Council’s nine members — who live in the U.S., the Philippines, Liberia, Mozambique and Norway — meet together at different locations around the U.S. Near the end of 2020, the Judicial Council announced on its website that its members would begin online deliberations on the postponed Spring 2020 docket, along with an additional four items. Those Zoom sessions will continue until the entire 19-item docket is addressed.

In March, the court separately released its first two rulings from the virtual session. Memorandum 1408 clarified a 2019 ruling related to the administrative process for clergy and the right of a clergy person to fair and due process. Decision 1409 affirmed that General Conference is the only body that can set denominational budget and apportionment guidelines, even under extraordinary circumstances — like a pandemic.

The Protocol of Reconciliation and Grace Through Separation, made public in January 2020, was created by a diverse group of representatives from United Methodist advocacy groups and several bishops.

The self-appointed group created the plan after a contentious 2019 special General Conference in St. Louis reinforced church bans on same-gender weddings and “self-avowed practicing” gay clergy, while leaving the divisions in the denomination unresolved.

In Memorandum 1407, the Judicial Council noted that since the Council of Bishops has neither approved nor endorsed the proposed protocol it is seeking a declaratory decision “as an interested party but not in its capacity as a governing body of the Church.”

With no record of the protocol being adopted either by General Conference or the bishops, it is “simply proposed legislation and stands in the same position for jurisdictional purposes as any other proposed legislation” not adopted by those bodies, the court said.

To determine the timeliness of the bishops’ petition, the Judicial Council said it considered the authorship and history of the proposed legislation and whether “it rests upon contingent future events.” The court also found the authors of the protocol to be “fundamentally different” from the Commission on a Way Forward, a group authorized by the 2016 General Conference.

“Until the General Conference has the opportunity to consider and act on all proposals, including the Protocol, we must avoid interfering with the legislative process through premature adjudication,” the Judicial Council said in its ruling.

In Decision 1401 — a response to a petition from the Council of Bishops — the court also affirmed “the validity and effective date” of Paragraph 2553 as found in Judicial Council Decision 1385. That decision declared the effective date to be the conclusion of the 2019 General Conference on Feb. 26, 2019.

Prompted by its investigation of improper voting after the special General Conference in February 2019, the commission announced in August 2019 that Paragraph 2553 should be null and void. The General Conference commission cited evidence that four ineligible people cast votes at the special General Conference using the credentials of delegates who were not present — enough to potentially affect the votes that created the paragraph. The approved legislation allows churches to disaffiliate from the denomination with property if they meet certain criteria.

The specific charges of improper voting were not addressed in Decision 1401. The court explained the question of alleged voting irregularities is “outside our scope of review” because the Judicial Council “is not an evidentiary body.”

“There is no provision in church law permitting us to conduct investigative or fact-finding proceedings in order to verify those claims,” the Judicial Council added.

Three of the Judicial Council decisions were from the 2019 Michigan Annual Conference — two rulings by Bishop David Alan Bard and a request for a declaratory decision, all connected to the denomination’s position on sexuality issues.

In Decision 1404, the Judicial Council agreed the bishop was correct in affirming the legality of a resolution about examining and recommending clergy candidates “without regard to their sexual orientation or gender identity.”

But the top court found that the concluding statement in Bard’s decision of law that the bishop “must ascertain and discern” whether approved clergy candidates are eligible for commissioning and ordination violates the constitutional authority of the annual conference clergy session. The Judicial Council found that part of the decision null and void and reversed it.

The bishop also ruled that a resolution about how the Michigan Conference “aspires to live” into an expression of Methodism “that includes LGBTQIA people in the full life and membership” of the denomination was indeed, aspirational, and did not violate church law.

The Judicial Council affirmed part of that ruling in Decision 1406, but said it did not affirm “the portion of the resolution that states that the annual conference is not to provide resources for investigations and church law.”

In response to the request from the Michigan Conference for a decision on the powers of General Conference, Judicial Council confirmed in Decision 1402 that General Conference “acted within its constitutional authority in prohibiting our ministers from participating in ceremonies celebrating homosexual unions and in making the performance of those ceremonies a chargeable offense.”

Reviewing the decisions of the Judicial Council, Bishop Bard said, “The rulings on the matters coming from the Michigan Conference will have little impact on the ongoing ministry of our conference and our churches. The declaratory decision on the authority of General Conference was not surprising.” Bard continued, “As this was my first experience as bishop submitting materials to the Judicial Council, I was pleased to have the majority of both my rulings of law affirmed by the Council.” He called the court’s statement of support for the Michigan Conference Board of Ordained Ministry, passed by the 2019 clergy session, “an affirmation of the work of the Board.” Bard then added, “The aspirational statement approved by the 2019 Annual Conference stands as a statement of direction for the annual conference as we move into the future.”

In Decision 1410, the Judicial Council upheld a ruling of law by Bishop Elaine J.W. Stanovsky made during a special session of the Alaska United Methodist Missionary Conference on Feb. 22, 2020.

In that session, the Alaska delegates adopted a petition asking the 2020 General Conference, then scheduled to start May 5, to discontinue its missionary conference status and instead make it a missionary district within an annual conference. When technical questions arose regarding the timing of the petition and taking action through a special session of an annual conference, the bishop ruled the petition was in proper order.

The Judicial Council found that Stanovsky’s decision of law “was correct at the time it was tendered.” Citing the continued postponement of General Conference due to the pandemic and an acknowledgment to the Judicial Council by the secretary of the General Conference that the Alaska petition has been received and found valid, the court ruled the case to be resolved and moot.

In other actions, the Judicial Council:

• Responded to the Baltimore-Washington Conference, in Decision 1403, that annual conferences do not have the authority to adopt rules governing delegates to general, jurisdictional or central conferences that mandate attendance at delegation meetings.

• Declined a request for reconsideration, in Memorandum 1400, of its previous ruling in Decision 1384.