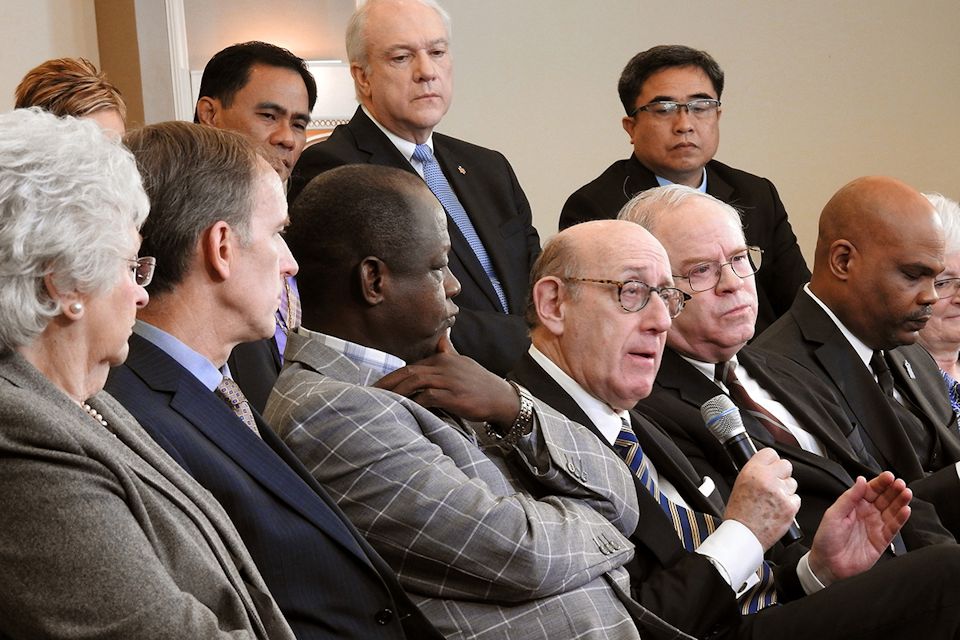 Kenneth Feinberg (holding microphone) speaks during a livestreamed panel discussion in Tampa, FL, with members of the team that developed a new proposal that would maintain The United Methodist Church but allow traditionalist congregations to separate into a new denomination. The United Methodist Judicial Council expects to decide soon whether it has the jurisdiction to consider the constitutionality of legislation for a proposed plan for separating the denomination. ~ UMNews file photo/Sam Hodges

The Judicial Council has not met since the coronavirus pandemic began. They now plan to use video conferencing to address issues, including the constitutionality of Protocol legislation.

The United Methodist Judicial Council expects to decide soon whether it has the jurisdiction to consider the constitutionality of legislation for a proposed plan for separating the denomination.

A March 11 request from the Council of Bishops for a ruling on the Protocol of Reconciliation & Grace Through Separation has been added to the docket for the top court’s first judicial session since the coronavirus pandemic began. The court will also revisit a request concerning improper voting at the 2019 General Conference.

Both requests are now part of a revised docket held over from last spring. The pandemic and subsequent postponement of the 2020 United Methodist General Conference forced the cancellation of the court’s April 29-May 2 meeting in Minneapolis. General Conference is the denomination’s top lawmaking assembly.

Normally, the Judicial Council’s nine members — who live in the U.S., the Philippines, Liberia, Mozambique, and Norway — meet together at different locations around the U.S. But it became clear the Fall 2020 session could not proceed in the usual way.

Instead, members of the court will “conduct its deliberations through a series of video conferences throughout the coming weeks and months,” the council announced on its website.

Decisions on docket items will be published on the website “as each decision and memorandum is perfected,” the announcement said. No oral hearings will take place.

“This is a new process for the Judicial Council,” the announcement said. “There is a 16-hour time span among the time zones in which the members reside. The council will endeavor to remain faithful in its work, albeit slower than meeting in person for one four-day session, as is the custom.  The Judicial Council asks for the denomination’s patience.”

Judicial Council had received briefs already for items on the original spring docket. The protocol and three other new items added to the revised 2020 docket, items 0420-15, 16, 17, and 18, will be posted by Nov. 18, and the deadline for submission of all briefs is Dec.18.

Those items include a review of a bishop’s ruling of law requested during a special session of the Alaska Annual Conference concerning missionary conference status and a request for a declaratory decision from the Council of Bishops regarding Judicial Council Decision 1383, an earlier ruling on Book of Discipline provisions on the administrative process on changes in clergy status.

The court also added a request for a declaratory decision from the General Council on Finance and Administration related to apportionments, the shares each annual conference pays to support international, national, and regional missions.

A diverse group of representatives from United Methodist advocacy groups and several bishops from around the world collaborated on the Protocol of Reconciliation & Grace Through Separation, which was made public early this year.

As the pandemic continues, some United Methodist leaders are urging that General Conference be virtual — if it’s held at all next year. The General Conference Commission has named a technology study team to look at ways to accommodate the full participation of nearly 900 voting delegates and other church leaders who come from four continents and 13 time zones.

The Judicial Council will take up another request from the bishops — part of the original Spring 2020 docket — that asks for a ruling on a new paragraph in the Book of Discipline adopted by the 2019 General Conference. The new paragraph, 2553, outlines procedures for “disaffiliation of a local church over issues related to human sexuality.”

The bishops want a declaratory decision from the court on the legal effect of the Commission on the General Conference’s finding that one of the votes leading up to the adoption of that paragraph was tainted by illegal voting.

The question of improper voting during the 2019 General Conference was discussed during a Judicial Council oral hearing a year ago when the court met in Evanston, Illinois.

During the hearing, several members of the denomination’s top court questioned the disciplinary authority of the commission to conclude — announced in August — that a vote on a disaffiliation petition should be null and void because “credible objective evidence” showed four ineligible people cast votes using the credentials of delegates who were not present.

In making that determination, the United Methodist Judicial Council at least temporarily bypassed the assertion from the General Conference Commission investigation that found improper voting meant the vote to substitute parts of Petition 90066, the disaffiliation petition, was null and void.

The court decided to hold the request submitted by the Council of Bishops on the question of improper voting to its next session, which would have been April 2020. In Decision 1386, the Judicial Council noted that “because of our inability to get the information requested during oral argument,” it would be best to re-schedule the case.

During the Fall 2019 session, the Judicial Council did rule that the disaffiliation legislation — reflected in the new Paragraph 2553 — had taken effect at the close of the special General Conference in February 2019.

Judicial Council Decision 1383, from the court’s Fall 2019 session and the subject of a request for a declaratory decision, relates a constitutionality question brought by the Western Pennsylvania Conference.

The Judicial Council found several provisions under church law on an annual conference’s administrative matters to be “unconstitutional, null and void” because they violate fair process.

“No administrative process can be fair and equitable if the body requesting involuntary change of status is also empowered to determine its merits,” the court wrote in Decision 1383. “The fundamental right to fair and due process of an accused clergy person is denied when individuals who were involved in referring, adjudicating, and reviewing an administrative complaint are also permitted to vote on the final disposition in the clergy session of an annual conference.”

In its ruling, the court said that pending administrative cases filed before the Nov. 1, 2019, the decision would not be affected by the ruling.

The review of a bishop’s ruling of law follows action by a special session of the Alaska Conference in February, when members voted to dissolve their missionary conference status and become a “mission district” within the boundaries of the Pacific Northwest Conference.

The request from the General Council on Finance and Administration is related to Paragraph 806.1 in the Book of Discipline and general church apportionments in 2021.

Two other items from the postponed spring docket are requests related to General Conference.

If the performing of those ceremonies does not meet the definition of “distinctively connectional,” the petition asks, has the top legislative body exceeded its power in prohibiting such weddings?

The Baltimore-Washington Conference seeks a declaratory decision on whether an annual conference can adopt attendance policies for delegates to the general and jurisdictional conference.