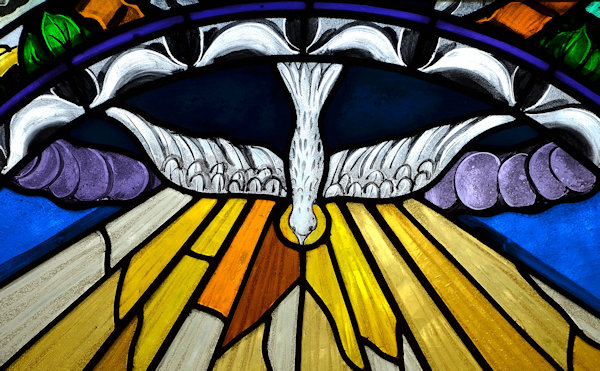 June 4th is Pentecost. It’s a time to open ourselves to new spiritual encounters.

“You are wrong to think these people are drunk. After all, it’s only 9 o’clock in the morning.”

The quote above comes out of the second chapter of the Acts of the Apostles (in the Bible). It is Peter’s argument in defending his friends before a bewildered group of onlookers. These onlookers had just witnessed Peter’s friends rush into the streets, proclaiming the great works of God. The especially weird thing about the situation is that many of the onlookers were foreigners in the land and they spoke many different languages. And yet, they all heard and understood.

No, the people were not drunk. It was just as the Apostle Peter had said. They were instead having a profound spiritual experience.

To those who were watching the scene unfold, the actions of those in the midst of their spiritual experience were confusing, and a bit startling. But the people were also curious. Many of us can relate, can’t we? As we watch others engage in spirituality, we also feel a bit confused … sometimes startled … and maybe a bit curious.

Something exciting, strange, and powerful had urged Peter’s group of friends to rush into the streets. They were emboldened in their actions. The affect was profound. It made a bunch of bystanders wonder aloud: “What is wrong with those people?” It also inspired them. By the end of the experience, many of those who began as onlookers were considered part of the strange group of assumed drunks.

This was the effect of the birth of the church.

Pentecost is celebrated 50 days after Easter (for those not keeping track, that would be June 4 in 2017). Pentecost is the day when Christians remember and celebrate the above-described events. We view Pentecost as the church’s birthday. It’s the day when the Holy Spirit empowered the people of God to do some exciting, strange and powerful things.

Different congregations mark the day in different ways. Some are still doing some crazy things. A congregation I was a part of tried to celebrate Pentecost by having the entirety of Acts 2 read in different languages simultaneously. Had we told the congregation what we were doing, the affect might have been a little less unsettling. Instead, it seemed like pandemonium. One woman was so startled she fled the worship service, telling an usher “Something’s not right in there.” People didn’t understand.

The miracle of the first Pentecost was that many heard and they wondered — but they understood. They got it. Peter’s group of friends ran into the streets shouting about the God of Israel and grace and redemption and a guy named Jesus, and it all made sense.

Such moments are Pentecost moments. They are moments when the Spirit of God breathes into us a spirit of understanding.

I remember sitting in a worship service when I was around 10 years old. The idea of God seemed a bit preposterous to me at the time. I had this image in my head of an old, white-haired man who drifted on the clouds while pulling the levers that made the universe work. I was considering the absurdity of all of us gathered together to worship this idea as the preacher delivered his sermon. The preacher himself may have been older than God.

I was daydreaming away when the preacher snapped me back to reality. He threw his arms out to the side and yelled, “God is love!” I have no idea what he’d been talking about prior to that moment. But in that moment, I understood.

I had seen love. I felt love. Love was real to me. The idea of the white-haired, lever-pulling god was absurd. But the idea of love was something real. It was a moment of clarity in attempting to grasp the reality of God. I may have heard the “God is love” line before (it’s in the Bible, 1 John 4:8). But this time I heard and I understood. Something brought me to a spirit of understanding.

It was a Pentecost moment.

My story may not resonate with you. It may not help to make sense of faith in the way it helped me to gain clarity. So we revisit the first Pentecost moment every year as an invitation to keep ourselves open to new Pentecost moments.

John Wesley, who is an important guy in the United Methodist world, had his own Pentecost moment. He taught that there are things we can do regularly to open ourselves up to receiving God’s spirit of understanding:

Individual Practices – reading, meditating and studying the scriptures, prayer, fasting, regularly attending worship, healthy living, and sharing our faith with others, doing good works, visiting the sick, visiting those in prison, feeding the hungry and giving generously to the needs of others.

Communal Practices – regularly share in the sacraments (Communion), Christian conferencing (accountability to one another), and Bible study, seeking justice, ending oppression and discrimination (for instance Wesley challenged Methodists to end slavery) and addressing the needs of the poor.

So, how are you observing Pentecost? As you practice the recommendations above, may you be mindful of how it draws you into a spirit of understanding, and draws you closer to God.