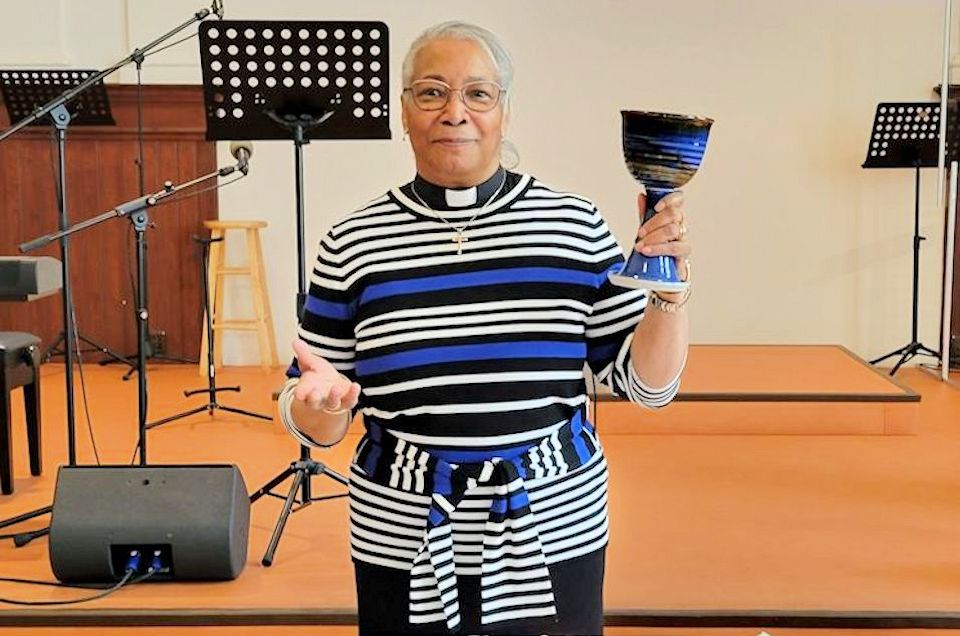 The Rev. Velma Campbell, from the UK, serves communion to those gathered at the English Speaking UMC in Prague on May 1, 2022. "We are just getting started again after COVID," she said. "People are starting to come back." ~ photo courtesy Kay DeMoss

The English Speaking UMC in Prague is a powerful expression of The Connection of The United Methodist Church. A rich mix of languages, nationalities, and cultures come together to glorify God.

We sang, “The Joy of the Lord is my Strength,” to the sound of guitars, keyboard, and drum. We heard lectionary readings from Psalm 30 and John 21. We took communion in those little cups that resemble coffee creamers. And we gave a gift for Ukrainian refugee relief. Just another Sunday at Georgetown United Methodist Church, where we regularly attend? No! The DeMosses weren’t in Michigan anymore.

At the end of a vacation across Eastern Europe, we had the privilege of worshiping today at the English Speaking UMC in Prague, the capital of the Czech Republic. It is one of 14 United Methodist congregations in that country. As the people welcomed us, we replied, “We asked ourselves, ‘Where would we feel most at home in Prague this morning?’ Our answer was, ‘At a United Methodist Church, of course!’”

The first person we met was the church’s current pastor, the Rev. Velma Campbell. She is from the UK and explained, “I jumped into the fray” when COVID struck, and the pastor from the U.S. went back home. She continued, “We are just getting started again after the pandemic. People who stopped coming are now coming back.”

We next met a leader in the church who described himself as, “A Czech by birth, but in my heart, I am a United Methodist from South Carolina!” He owed that feeling to his time at Clemson. He told us that the building was originally a pub before it was purchased in 1920 by the Methodists. “The neighbors at that time were glad it became a church instead of the worst pub in the neighborhood.” The church survived World War 2 and the Soviet time as a Czech-speaking congregation. The English-speaking UMC began in 2011 in a partnership between the Czech United Methodists and their brother and sister UMs in Tennessee’s Holston Conference.

Pastor Campbell’s sermon recalled the post-resurrection breakfast on the beach recorded in John’s gospel. Her message of encouragement and challenges provided Easter hope to listeners coming out from under the shadow of COVID yet living next door to war. Prague is a ten-hour drive from Ukraine.

“Jesus reminds the disciples,” Campbell said, “of their first call. Their listlessness is gone. The story tells us that Jesus forgives and gives us more chances.” When Jesus “reinstates Peter as a shepherd, that’s good news for us, too. We, like Peter, can be forgiven and reinstated in our calling.”

Had we been home in Jenison, MI, we would have broken the seals on the small cups to partake of the wafer and the juice. As we gathered around the Table in Prague, that same action reminded us of our friends in faith over 5,000 miles distant. We heard the familiar words of the Communion liturgy with a new appreciation for the ties that bind United Methodists all over the globe.

Closing announcements included a report from worship leader Rob Keating, whose day job is teaching English in the city. He came to Prague from Alabama five years ago. Keating gave a progress report about the shelter being set up downstairs below the sanctuary for Ukrainian refugees. “We are creating a place to sleep for a few nights until refugees manage to orient themselves in the Czech Republic and find something more permanent.” The shelter involves the standard pillows, mattresses, and bedding plus a significant portion of grace and collaboration. The shelter is being created in partnership with the Russian-speaking church that also worships in the building.

Following worship, we met a missionary family from Pennsylvania teaching English to Russian speakers. We also met Ray Wilck, a retired missionary of the General Board of Global Ministries. Originally from West Virginia, Wilck lived in Detroit for ten years, working for TV 50 before responding to the call to mission. Wilck shares his experience in Prague’s United Methodist Church, inclusive of Czechs, Russians, and Ukrainians, in an article written on March 19, 2022, titled “I Witnessed a Miracle.”

From 1948 until the end of November 1989, Czechoslovakia (the Czech Republic since 1993) was under Communist rule and was a satellite state of the Soviet Union. Lynn DeMoss shared a memory with the congregation from a previous visit to Prague in 1966 accompanied by a group of Michigan Methodist teens. “We visited a Methodist Church and were asked to sing,” DeMoss recalled. “The elderly congregation wept to see young people in the church.” He added, “Today, it is wonderful to see youth in this sanctuary! ‘Weeping may tarry for the night, but joy comes with the morning.’”

The Rev. Bill and Jenny Seagren attest to how God’s Spirit moves in today’s Czech Republic. Bill, a clergyman from Oregon, has been on appointment beyond the local church in Prague for the past four years. Both are teachers. While evangelism is at the heart of his ministry, Bill says, “We are not heavy-handed. We speak specifically about religion in class on occasions such as Easter and Christmas.” Jenny remembers an encounter with one of her students who said, “I have never met someone my age who is a Christian.” They have continued to meet for Bible study since that moment. The young woman told Jenny, “We all believe in something, but we can’t name what it is.” Jenny’s response to her was, “Once this country had forced religion. Then there was forced atheism. But now you have the freedom to choose!”

We left that morning through the same doors through which we entered. Above the doors, in English and Czech, were signs: “Imperfect People Welcome.” We felt right at home.

So it was that on May 1, 2022, a day to be remembered for the disconnection of The Global Methodist Church from The United Methodist Church, Lynn and Kay DeMoss had the most powerful experience of connection in our lifetime at the English Speaking UMC in Prague. Thanks be to God!