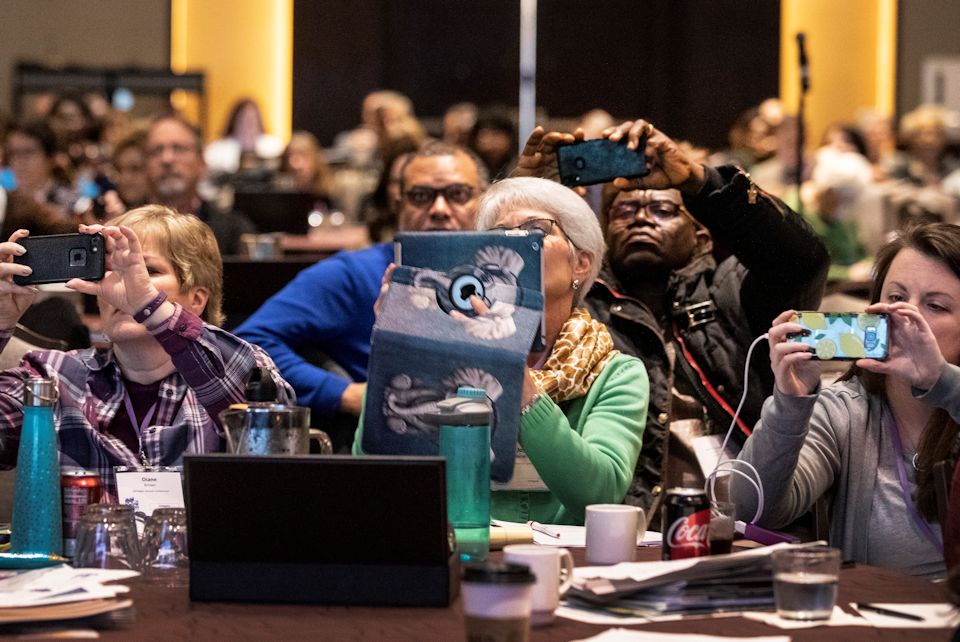 When Michigan delegates attended the Pre-General Conference briefing in January 2020, little did they know that the event they were preparing for would be postponed twice, stretching over 27 months. L-r Diane Brown, Joy Barrett, and Megan Walther record parts of the briefing. ~ UMNews/Kathleen Barry

Meeting on February 20, the Commission on the General Conference has further postponed the 2020 General Conference until August 29 – September 6, 2022, in Minneapolis, MN, as the COVID-19 pandemic continues to affect the safety of mass gatherings and travel.

In making the decision, the Commission determined that it was not feasible to safely hold an in-person meeting involving all delegates as currently scheduled for August 29 – September 7, 2021, due to several barriers:

There also remains the possibility that a temporary six-month visa bond program that requires bonds of $5,000 – $15,000 per person for residents of some countries could cost up to $2.5 million in bonds for affected delegates if the program should be extended beyond June.

The Commission’s decision was informed by the Technology Study Team’s report appointed to explore the implications of options for accommodating full participation at General Conference, including but not limited to the possibility of utilizing technology and online voting, in considering whether the meeting should be held virtually.

According to their report, “The study team considered a number of challenges and implications, including how to keep participants safe, providing for global participation, safeguarding the integrity of the voting and credentialing process, and meeting legal requirements …”

The Technology Study Team analyzed a variety of options, including an entirely electronic General Conference with participation from individual locations; an entirely electronic General Conference with delegates gathering at regional satellite hubs; and two sessions, with the first part being electronic and the second part in-person when it is safe to convene. None of these options were determined by the study team to be viable.

The study team did find that a more traditional method—utilizing mail ballots to vote on emergency actions—could help The United Methodist Church to address important, urgent matters through the General Conference. Their report recommended utilizing mail ballots for making a limited number of “Emergency Interim Actions” on which the General Conference delegates would indicate a yes or no vote for each item.

“The Commission shared the study team’s findings and recommendations with the officers of the Council of Bishops in a collaborative effort to jointly explore how this alternative might be utilized to address critical matters until an in-person gathering of delegates can be safely convened next year,” said commission chair Kim Simpson.

Some of the concerns mentioned in the report regarding having a virtual session include:

Simpson said the August-September dates in 2022 would mean that General Conference will be one day shorter than planned for 2021; however, these dates were the only option available. Simpson said that the Commission regrets that these dates once again conflict with the start of the academic year in the U.S., which a group of young adults had asked the Commission to avoid, but there were no other dates available.