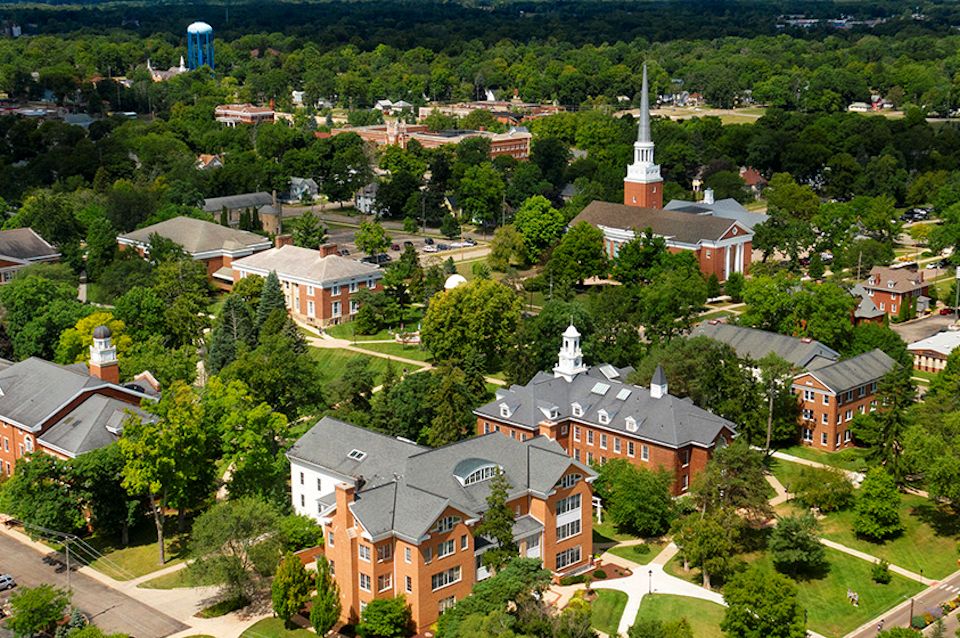 COVID-19 brings uncertainty to the academic year that begins Aug. 24 at Albion College. President Mathew B. Johnson looks forward to facing challenges along with students, faculty, and the community.

A servant leader and a deep listener. That’s how Dr. Mathew Johnson introduced himself to the Albion College community as he entered the president’s office. Dr. Johnson comes to United Methodist-related Albion as the 17th president after the retirement of Dr. Mauri Ditzler and his six years in distinguished leadership at the school. Dr. Johnson’s tenure began on July 1, 2020 and his formal inauguration will take place on October 17, 2020.

President Johnson comes to Michigan from Brown University where he served as the Associate Dean of the College for Engaged Scholarship and the Director of the Howard R. Swearer Center for Public Service. A sociologist by background and training, he is internationally known as an expert on community engagement, which fits well following Dr. Ditzer and the college’s significant commitment to work with the Albion community to revitalize the town as well as the college.

The Rev. Dr. Faith Fowler represents the United Methodist Church on the Albion Board of Trustees. She says, “The trustees were looking for someone who would embrace the growing diversity at Albion, who would be committed to the transformation of the campus and the city, and who would take bold steps to ensure that the college prioritizes academic excellence. After considering nearly 100 candidates, it was determined that Dr. Mathew Johnson was all of this and more.”

In his introductory video, he said, “Commitment to community service is at the very core of who I am.” He identified himself as a “servant leader,” one who would work to “activate the energy and passion of others” in the work of higher education and community service.

A second trait he brings to the office is that of a “deep listener” who looks forward to interaction with students, faculty, trustees, and community leaders as they seek to face the challenges of higher education and community development in the light of all the upheaval in our current world.

Dr. Johnson acknowledges there are many challenges to the very existence of liberal arts higher education in our times. He believes Albion’s answer is to “turn the very core of liberal arts loose on the problems we face in today’s society.” This includes working with faculty to move the curriculum in a new direction. Instead of dealing primarily with the problems and solutions we have known, he says, “It’s about the problems we don’t know and the answers we don’t have.” This forward-thinking approach will call on all parts of the Albion campus and community to think creatively about the future and what it holds for the college, the community, and the world.

His introductory video (which is available at www.albion.edu) focuses on three interrelated themes:  “Passion. Courage. Innovation” — “Diversity. Equality. Inclusion” — “Authenticity. Service. Commitment.” Together they represent the commitments of the college and Dr. Johnson’s vision for the future.

He enters the office at a time of great uncertainty due to the COVID-19 pandemic, but he sees it as a possibility rather than a problem.  Johnson says, “It’s a unique situation. Other college presidents have assumed the role during world wars and economic downturns, and this challenge is not unlike those. To me, however, problems like this are great puzzles to be figured out. That’s how I am approaching COVID-19.” Part of the answer is the implementation of two seven-week learning modules beginning in August which will allow students to live and learn on campus but limit their number of contacts. The semester will conclude at Thanksgiving.

Originally founded by Methodist settlers in the Michigan territory in 1835, Albion has maintained its historic relationship with what is now The United Methodist Church for 185 years. It shares Methodist roots with its sister school in Michigan, Adrian College.

In reflecting on the Methodist history, Dr. Johnson says, “Albion’s rich legacy is grounded in the idea of education for public purpose. In my work, I’m frequently drawn back to the John Wesley quote which was often shared by my grandmother: ‘Do all the good you can, by all the means you can, in all the ways you can, in all the places you can, at all the times you can, to all the people you can, as long as ever you can.’ This charge is at the heart of the work we are doing at Albion as a bold learning community, driven to make meaningful contributions to our community and our society.”

United Methodists of Michigan and Albion alumni join in welcoming President Mathew Johnson with a warm “lo Triumphe!” as he comes to lead the college into the future.