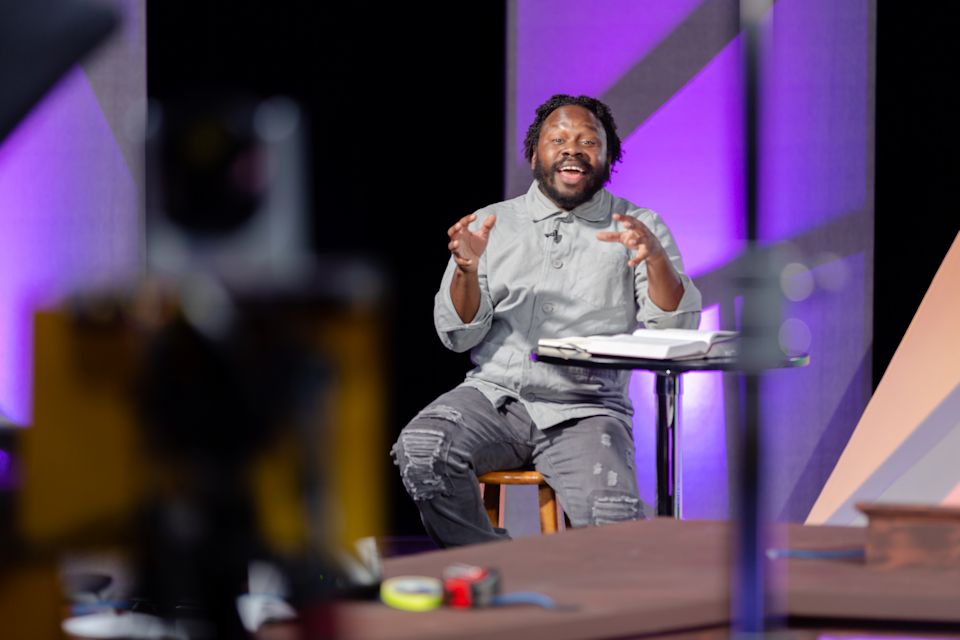 Derrick Scott, himself a lay person, was the keynote speaker at the Laity Event of the 2021 Michigan Virtual Annual Conference. Scott is the Executive Director and United Methodist Campus Minister for Campus to City Wesley Foundation in Jacksonville and St. Augustine, FL. His comments were recorded in Lansing on June 1, then he participated by live-stream from his FL base for the Q & A that followed. ~ mic photo/Aaron Word

Derrick Scott, Executive Director of Campus to City Wesley Foundation, came from Florida to Michigan to talk about the lay person as a “gospel on the ground.”

June 3, 2021 | LANSING — Annual conferences in Michigan have always included a time for the laity to gather for orientation. These were times of significant information sharing and preparation for the work ahead. In 2021, the Laity Event, aired virtually at 4:00 PM on Thursday, June 3, was a rich time of celebration and teaching around God’s equipping and empowering lay persons.

The event was hosted by Michigan Conference Lay Leader Annette Erbes and Laura Witkowski, Associate Director for Lay Leadership Development, with help from members of the Board of Laity.

Jenna Walker and Andrew Lajoie led the singing, followed by a statement of purpose for the event offered by Jody Pratt, Conference Co-director of Lay Servant Ministries. “The Michigan Conference Board of Laity has planned for this event to inspire, invite, and reaffirm our commitment as laity to serving the Lord,” Pratt said.

Ruby Anderson, Greater Detroit District Lay Leader, led devotions based on Matthew 9:35: — “The harvest is plentiful, but the laborers are few; therefore, ask the Lord of the harvest to send out laborers into his harvest.” After Anderson and Pratt shared in a Litany for the Laity, Annette Erbes introduced the keynote speaker, Derrick Scott III, a layperson from the Florida Conference. Scott is the Executive Director and Campus Minister for the Campus to City Wesley Foundation in Jacksonville and St. Augustine.

Scott’s presentation was a challenge to be “More than JUST a lay person.” He began his remarks, saying, “I am part of the ministry of the laity of The United Methodist Church. I mean, I love the clergy — the clergy are cool — but it’s the laity, man. The laity are the folks who actually, like, do the work … It’s not a throw-away group. It’s not a default status, but a key part of how Jesus moves and helps people experience the love of Christ around the world through the Holy Spirit.”

Scott shared a bit of his story. He grew up in the African American Baptist Church, where he was at church “on an easy week, four days.” He eventually transitioned to the United Methodist Church in Jacksonville, FL, where “people noticed my gifts, they notice the grace on my life … and began to affirm me saying, ‘Man, you should go into ministry. You should consider being an Elder.'” Scott added, “I never quite felt like that role was really what I was being called to.”

Scott got the “idea in my head that if I was gonna play a key role in the Church, I needed to be ordained.” That led him to a candidacy retreat in the Florida Conference, where he realized, “something wasn’t clicking … I rarely heard someone speak of a lay person in a way that made me say, ‘Yeah, I think I want that. I think that’s what God wants me to do.'” His discernment continued in a candidacy group, where he asked his mentor one day, “So, tell me about the laity.” He confessed he doesn’t remember what SHE said, but, “I could’ve sworn I heard Jesus say to me: ‘This is it, Derrick. This role, the laity, that’s where I want you. Yeah, I want you to lead, I want you to bring your gifts.'” He continued, “I just couldn’t throw that away. I couldn’t dismiss it.”

At that point,  the ministry of Campus to City Wesley had just started under his leadership. With the fear that he would be asked to step away from that new role, he told his mentor, “I feel Jesus is asking me to be a lay person.” But when he articulated the call to lay ministry, the response was enthusiastic, “Oh, my gosh! You’re a layperson, and you wanna lead, and you wanna help the mission of The United Methodist Church go forward? Let’s do some stuff!” That was when he became an associate conference lay leader in the Florida Conference. Then a delegate to the 2016 General Conference. “After 18 years of campus ministry, Scott says, “I feel like I’m living my best life.”

He then asked Michigan lay persons, “What’s your story?” He directed attention to the Book of Discipline ¶127 that outlines “life-giving and direction-giving words” for the laity. Scott stated, “This paragraph is not a default status … it is the primary evangelistic ministry of our church.” He also reminded members, “The reason we have [Elders and Deacons] is so that the rest of us could receive our calling, could have our gifts named and nurtured, could have our talents celebrated, and to be told, ‘Hey! You are not just a butt in a seat on a Sunday, but you are called to be the primary evangelistic ministry by which The United Methodist Church fulfills its mission.'”

Calling laity “the gospel on the ground,” Scott said laity “are the ones who can go to places that our clergy sometimes can’t get to” … in an algebra classroom … as an accountant … to government and public service … food service … the board room … the hospital room … in construction. “Friends, if we are not living out our evangelistic call to be the gospel on the ground for the sake of the world, to be the hands and feet and heart and life of Jesus, then how will people ever, on a regular basis, know that there’s a God in Heaven who loves them?”

Turning to scripture (Matthew 9), Scott said the text shows, “Jesus is just where the people are, and he’s looking for some folks who will come with him on the journey, looking for some folks who will join him in simply being where the people are.” He then brought the scripture to the here and now, stressing, “[Lay persons] are not walking in with collars, and we’re not walking in with credentials, we’re walking in — we’re just living out our walk with Jesus, trying to figure out how we’re gonna make sense of our lives We are just like our friends, just like our neighbors, just like the people in our community, and we’re just where people are.”

The keynoter summarized the work of the laity:

He drew another point from the gospel reading for those in their 20s, 40s, 60s, and 80s. “We don’t hear Jesus saying, ‘Go down that road of ordination.’ But we do hear Jesus saying, ‘Come work with me, follow me, be an example of my love and be a conduit of my grace in the world.”

After turning to Matthew 10, Scott concluded with a question to each lay person in Michigan, “Are you willing for your name to be called and added to the list of those that Jesus can look to when there’s an issue that needs to be dealt with when there are people who are harassed and oppressed in your communities? Are there any individuals who will put their hand up and say, ‘Jesus, I’m a lay person, but I’m not just a lay person. I am a lay person with gifts that can be used to bring justice and advocacy in this situation?'”

Following Scott’s presentation, Laura Witkowski moderated a Q & A. Derrick Scott was live-streamed from Jacksonville, and Michigan laity offered questions via Zoom regarding their dreams for the church and ways to partner with pastors for vibrant ministry.

Annette Erbes offered prayer, and the event closed as it began with songs of praise and gratitude.

~ The entire Laity Event may be viewed on Vimeo here.