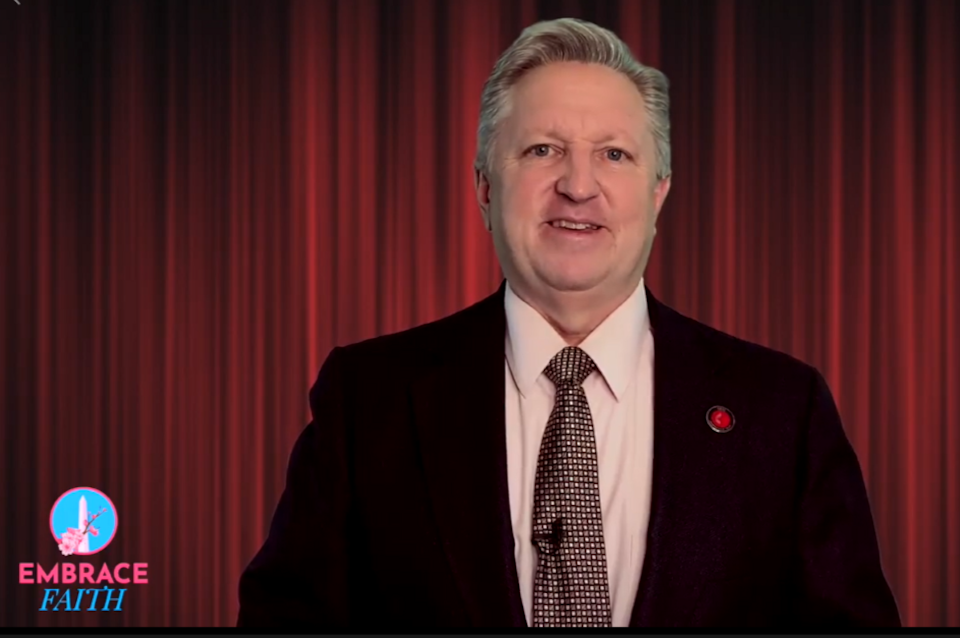 Mark Doyal, President of the United Methodist Association of Communicators, welcomed a virtual audience to the Annual Awards Celebration held on Facebook, May 21, 2020. ~ Facebook video image/UMAC

UMAC recognized Michigan Conference Communications for their excellence in Digital Publications, Writing, and Publicity and Advertising at their virtual gala on May 21, 2020.

United Methodist Association of Communicators (UMAC) was among the thousands of organizations whose usual traditions could not be observed this year. An Annual Meeting and Awards Ceremony scheduled to take place in Washington D.C. mid-March and then rescheduled for General Conference, did not take place. However, thanks to the blessing of technology, UMAC came together online on May 15 for business and again on May 21 for a party.

Outgoing Chair of the UMAC Leadership Team, Mark Doyal, kicked off the May 15 Zoom webinar, saying, “I think we all wish we were able to do this in person this year … instead we’re coming to you from basements and bedrooms and dining room and kitchen tables all across the USA.” Doyal, Communications Director for the Michigan Conference, then added, “We figured that 2020 was going to be the year that The United Methodist Church changed forever. We just didn’t think it would be a pandemic that did that. As communicators, we’re used to adapting quickly to unusual situations. UMAC is doing that too—thus, this first, historic online member meeting.”

The business of the day included electing leadership, accepting the 2020 financial report, and electing two new members to leadership.

In her address to the members of UMAC, Bishop Cynthia Fierro Harvey of the Louisiana Conference thanked communicators for the crucial role they play in The United Methodist Church. “You all have adapted—and you’ve adapted well,” said Harvey. “You’ve become teachers, you’ve become professors of communication, you’ve become televangelist consultants to our pastors, you’ve become armchair epidemiologists and prognosticators and people expect you to have all of the answers.

“We’re in uncharted territory. I’m thankful for you.” Harvey, who recently took her place as the President of the Council of Bishops, reminded participants that the church is at its best in times of crisis. “This is when the connection becomes even more important for us. I pray we don’t forget how important this connection is.”

Video of the meeting may be viewed on the UMAC Facebook page.

UMAC members from around the globe came back together online on May 21 for a virtual awards celebration. Doyal thanked members again for his four years as Chair of the Leadership Team. He noted, “It is the connection that makes UMAC work.” He then observed, “There may be difficult days, weeks, and months ahead of us. I am hoping one day we will look back at this difficult time and say, ‘While it was hard, it made UMAC and our relationships even stronger.”

Work was submitted across 10 classes of communications, with a Best in Class for each, as well as first, second, and third place winners selected for each category. The group also honored its 2020 Communicator of the Year, Todd Rossnagel, director of communications for the Louisiana Conference of The United Methodist Church. Best in class winners took part via pre-submitted video. Click here for a complete list of award recipients [PDF], including links to many of the winning entries. Awards were given for work done between November 2018 and October 2019.

It is significant that a Michigan writer by honored with The Donn Doten Award. The Rev. Donn Doten served the Michigan Area as the Editor of The Michigan Christian Advocate until his death in 1982. Doten also served churches in The West Michigan Conference as senior pastor, including Traverse City: Central UMC, Grand Rapids: Trinity UMC, and East Lansing: University UMC. Congratulations to the Rev. John E. Harnish for continuing a tradition of journalistic excellence.