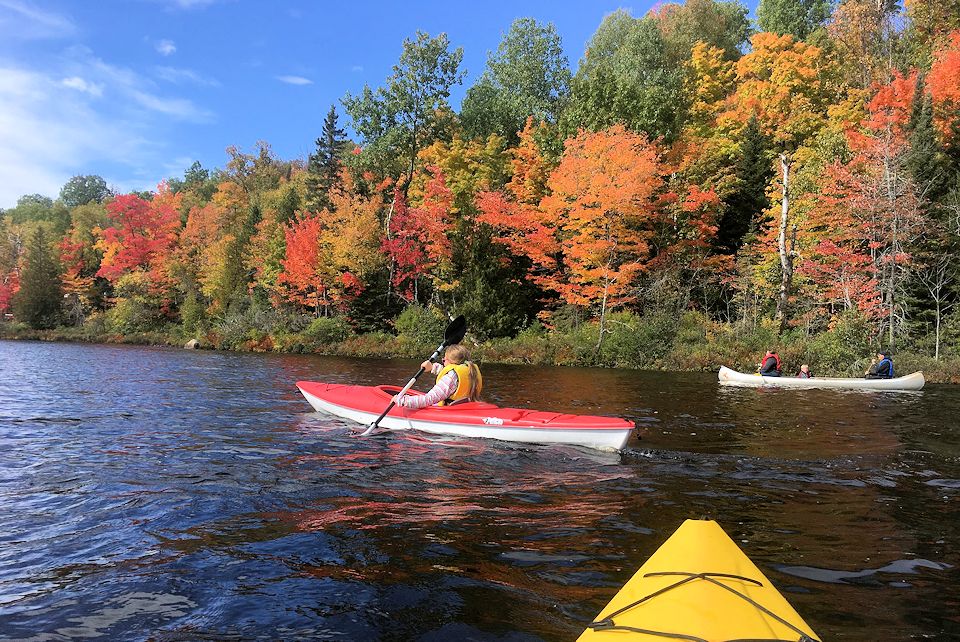 With a new director on board and with a coronavirus vaccine on the way, we pray that kayaks will once again paddle the waters of Lake Michigamme in 2021. The camp remained closed during the 2020 season due to COVID-19 risks. Photo from August 2019.~ Facebook/Camp Michigamme

Meet Pete Stahlbrand, the new director of Camp Michigamme in the northwest U.P. He is a veteran of ten years of service in New Jersey, New York, New Hampshire, and Massachusetts.

“If we are going to counter some of the negative trends in our society, we are going to have to re-envision what we do with our kids,” says Pete Stahlbrand, the new director at Camp Michigamme in the Upper Peninsula. Pete comes to Michigan with a breadth of experience and a broad vision for what camping, particularly Camp Michigamme, can mean for the church and the world.

He says, “Often we get kids for a week who are not regularly attending church.  It’s our opportunity to make a difference in their lives that could last a lifetime.” For many campers, he says, “This might be their first step in the door that could lead to the church.”

Pete began his work at Camp Michigamme on October 15, 2020, after ten years of work in camps in New Jersey, New York, and Massachusetts. Most recently, he was the director at Camp Wiyaka, a YMCA camp in New Hampshire.

Pete says his first experience as a camper was when his parents, originally from New York City, sent him to Boy Scout camp for a week. As the oldest of five children, it was the first time he was on his own and he loved it. He says, “Camping just kept pulling me back in.”

After graduating from Virginia Tech with a degree in wildlife sciences, he worked in a number of camps with a program called “Nature’s Classroom.” Schools would bring their students to camp for a week and he was one of the staff who provided the program.

He says he believes in the value of camping because (1) it is often campers’ first experience with autonomy, and (2) they are learning to live in community, to be part of a family beyond their birth families.

During his time at Camp Wiyaka, the camp saw a significant increase in the number of campers. With a capacity of 72 kids per week or 576 over the eight-week season, they were only averaging about 250 a summer. Under his leadership, attendance increased to 470 per summer. Pete says, “We put an emphasis on drawing the staff out of former campers and worked on improving staff retention.”

Of course, 2020 and COVID-19 had a major impact on camping programs across the nation, but Camp Wiyaka was able to open with intentional safety protocols. Out of 160 camps in New Hampshire, only three were allowed to open. “We worked closely with state officials and the CDC,” he said, “and had a successful season without incident.”

Looking forward, to next summer, Pete believes, “COVID has given us an opportunity to reset, to focus on what we need to do to get more kids to camp safely.” He affirms that the United Methodist churches in the U.P. have a proud sense of ownership for Camp Michigamme and see it as a way for the churches to extend their welcome to an inclusive variety of kids. “We also need to take advantage of the fact that lots of families from down-state and Wisconsin like to vacation in the U.P.,” he says. “So, let’s tell them they can come and bring their kids to camp for a week while they take an adult vacation.”

Northern Skies District Superintendent Scott Harmon says, “Pete Stahlbrand comes to Camp Michigamme with many years of “on the ground” camp leadership experience, paired with a passion to create an environment where young people can grow to recognize and embrace the thumbprint of God present within each of us.”

Pete and the Michigamme Board of Directors are working on a plan to open next summer with a strong commitment to health issues and the safety of the campers and staff. “We want to gather people AS MUCH AS POSSIBLE (he stresses the words) depending on the state requirements and the spread of the virus. They will begin recruiting campers around Christmas and hope to have a final determination of their plans for the summer by Easter.

Because the school-age population in the U.P.  and the number of youth in United Methodist churches have been declining, Pete envisions youth groups from the city of Detroit or other down-state communities coming to Camp Michigamme as a way of introducing youth from the city to the U.P. and “Yoopers” who seldom cross the bridge to kids from the metropolitan areas. He even raises the possibility of international groups looking for experiences in America to find their way to Michigamme. With fewer United Methodist camps in the state, Pete believes Camp Michigamme has something to offer to a broad range of campers.

Pete argues that we need to make camping a part of the strategic plan of the church if we are to reach a new generation. “We want to welcome kids with as few barriers as possible”, he says, “and perhaps introduce them to the faith for the first time.”

District Superintendent Scott Harmon says, “Pete brings an ability to genuinely connect with people, from youth to adult, which will complement well with the Northern Skies District.” With a commitment to the tradition and history of Camp Michigamme and a vision for the future, Michigan United Methodists welcome Pete Stahlbrand as the new camp director at Camp Michigamme.