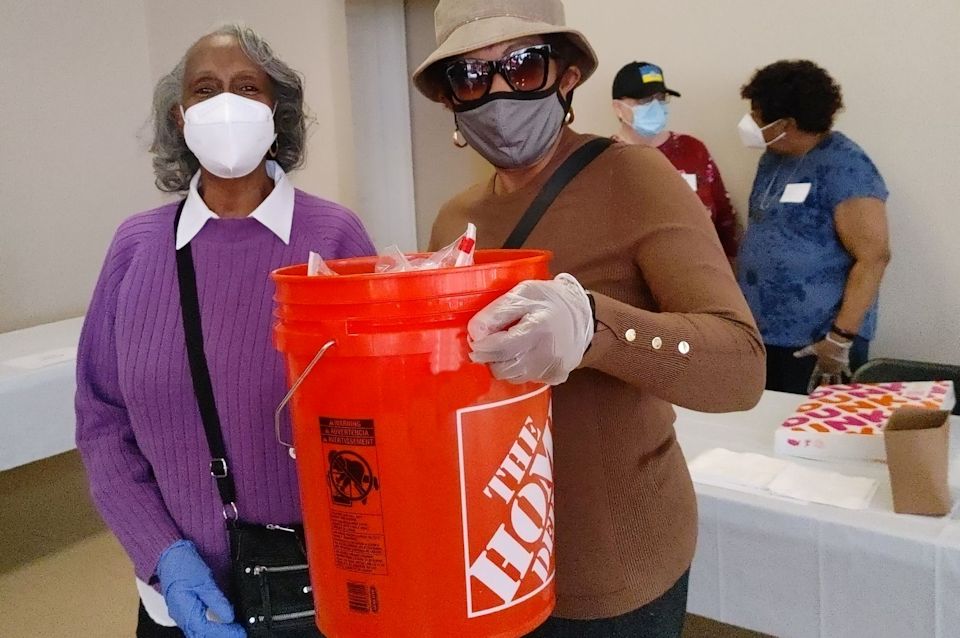 On May 7, neighbors came together at Detroit Second Grace UMC. These volunteers did more than fill buckets with cleaning supplies. "It was about making connections and expanding our network of neighbors. Yes. Five people could have filled all the buckets in two hours. But, what was the 'love' in that.?! Superintendent Charles Boayue opened the gathering with Corinthians 13. It was our day to share the love." Funding for the buckets and supplies was provided by Detroit Metropolitan UMC's United Women in Faith. ~ Facebook photo

Support from the United Methodist Committee on Relief has made the Michigan Conference a leader in long-term disaster recovery in the State of Michigan.

The United Methodist Committee on Relief does not work alone. UMCOR has partners on the ground all around the globe. Closer to home, The Michigan Conference has been one of those partners.

Over the past eight years, the Michigan Conference has provided disaster case management in communities impacted by flooding across the State of Michigan. Disaster case management programs were established in Northwest Detroit in 2014 and 2019, Midland County in 2017, Houghton and Hancock in 2018, and the Great Lakes Bay Region in 2020. In each case, the Michigan Conference collaborated with community leaders, nonprofit organizations, and municipal, county, state, and FEMA officials. Paul Perez, Director of Connectional Ministry, notes, “We are currently the only entity providing disaster case management services in Michigan.” He adds, “This work has been completely funded by UMCOR grants, community foundation grants, and donations to The Michigan Conference Disaster Response Fund.”

Money also reports that the GLBR initiative, which began in May of 2020, is now “winding down. There were 440 cases opened over the past two years.” Two case managers, Raegan Schultz and Pamela Wilson, are still at work. Money expects their efforts to be done entirely by mid-October. Money notes that the investment by UMCOR was impactful in two ways. “It got case management up and running and then helped leverage other dollars from community foundations and FEMA.” One UMCOR grant of $600,000 was for direct assistance to families in Arenac and Iosco counties. “These families would have had no financial support,’ Money explains, “without those UMCOR dollars, as no community funding covered them.”

Raegan Schultz observes, “While reflecting on my last 22 months of working as a Disaster Case Manager in the Great Lakes Bay Region, I feel both honored and inspired. Honored by the individuals and families who welcomed us into their lives during one of the most difficult times they have ever faced.  Honored to hear their stories and become a part of them. Inspired by each individual’s strength and resilience, and inspired by a community who banded together to ensure that those most at risk as a result of the flooding/dam failure were not left behind.”

Cheryl Tipton, an UMCOR-trained case manager through three different flood events in Greater Detroit since 2014, assesses the current needs. “Besides mold remediation and sanitizing and debris removal in the basement, I would say the most urgent needs are hot water tanks and furnace replacement. Residents are also in need of roof replacement and painting in basements.” Tipton adds, “What people need most after disaster strikes is someone willing to listen to how this has affected them. They need a helping hand.”

Scaling up our services

The work in Greater Detroit is about to get a significant boost thanks to what Perez calls “the creation of an affiliated nonprofit that will scale up The Michigan Conference’s disaster case management services.” Perez continues, “I believe one of the primary tasks of the annual conference is to incubate ministries that no one local church could do on their own and that meet missional needs in local communities. We have now done that with disaster case management.”

He reports that this ministry, called MiDRR (Michigan Disaster Response and Recovery), “has matured to a point where it is ready to ‘leave the nest’ and continue to flourish and thrive as its own organization.” Michigan disaster response leaders created MiDRR with the help of the General Council on Finance and Administration. A separate corporation from the annual conference, 60% of the board of directors of MiDRR are elected by the Michigan Annual Conference. All assets of the organization revert back to the conference in the case of dissolution.

Perez explains, “While MiDDR may request funding from The Michigan Conference through grants and programs like EngageMI,” there is no expectation for the conference to budget to support the organization.

MiDDR has a “ramp up” function with the administration of one or more active disaster case management projects.” But it will “ramp down” to minimum core staff when no case management is being done.

This summer is a “ramp up” season. Nancy Money reports that the State of Michigan has received a $19 million grant from FEMA. The state has named MiDRR as the provider on the grant. Along with sub-providers, St. Vincent DePaul and the Wayne Metro Community Action Agency, MiDRR will utilize $15 million of that grant to employ up to 80 case managers, construction analysts, and resource coordinators.

These persons will meet the needs of the 100,000 residents who have applied to FEMA for assistance since they suffered the initial water damage to their homes a year ago. In some ways, the destruction was less catastrophic than in the GLBR flooding. However, it was just as disruptive to the lives of these families, who suffered through a Michigan winter with mold and without heat.

Marathon not a sprint

Some may wonder why it takes a year to mount a big-scale response to a disaster. Money says, “We have to remember that recovery is a long process, a marathon and not a sprint. People want to respond when disaster hits immediately, but people must trust the process.” Now that people see the impact of case management and the positive results for survivors, “they have bought into the reality that United Methodists know how to do it.”

Money credits Dan O’Malley, Disaster Response Coordinator for the Michigan Conference, for being instrumental in getting long-term recovery groups up and running wherever needed. O’Malley will be one of the board members of MiDRR.

Nancy Money leaves the Midland County United Way on May 20 to become the manager of MiDRR. “I know this is where God has led me,” she concludes. “This work is life-changing for survivors. It’s great to be part of an effort that makes them whole again.”