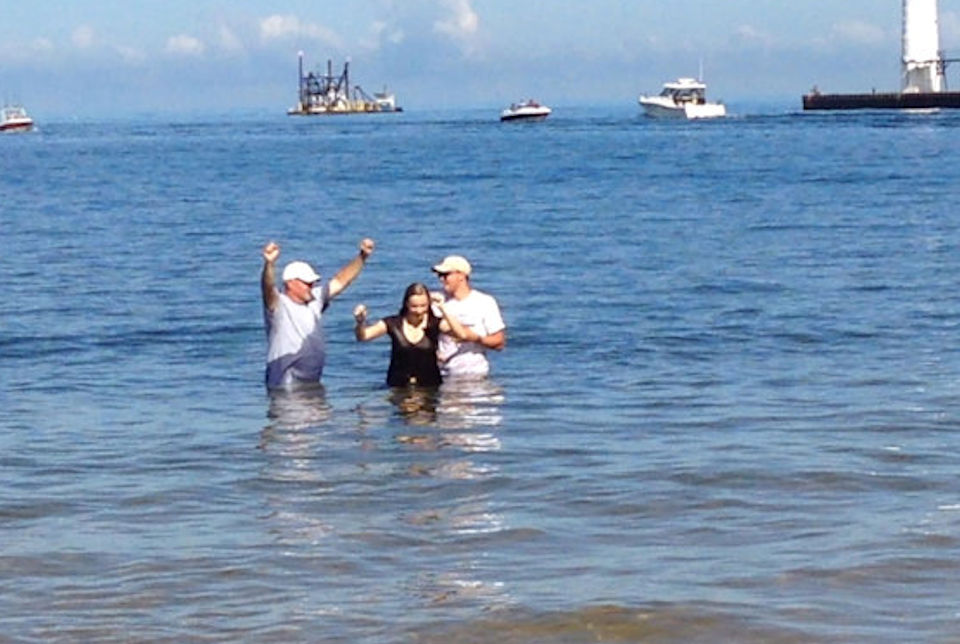 Pastor John Scott welcomes another person into the family of God during Baptism on the Beach. ~ photo courtesy Manistee UMC

If there’s one thing United Methodists like it’s acronyms. Some call it “alphabet soup” and there’s even an official glossary to help decode them. One acronym has become quite familiar in Michigan over the past six years … VCI. Many have heard that acronym and 167 congregations have gone as far as Phase 1 of VCI. According to Gary Step, Associate Director of Congregational Vibrancy for The Michigan Conference, 113 of those 167 churches are currently going on to VCI “perfection,” living into the prescriptions (ministry plans) developed during their consultation process.

VCI – Vital Church Initiative – is described in a brochure as “a process of renewal for growing vital and fruitful congregations in The Michigan Conference of The United Methodist Church.” The description goes on. “VCI offers pastors and congregations a better future by providing hope to leaders who have lost their outward focus. VCI prepares them for systemic change that will enable them to once again answer God’s call to reach out to new people with the Good News.”

When asked what the main contribution of VCI has been in these years since 2012, Gary Step said, “VCI has changed the culture of the Michigan Area in terms of how we think about church growth and what it means to be a healthy and growing congregation by looking beyond the walls of the church.”

Step has been a leader in VCI along with colleagues Dirk Elliott, Naomi Garcia, and 40 trained coaches, consultants and facilitators. He says the Vital Church Initiative, “has helped churches understand how stuck they are.” Further, “It has given us a common vocabulary to talk about what it means to be a healthy church.”

Step is quick to note that as churches struggle to understand their culture and how to get unstuck,” VCI is no “silver bullet.” He estimates it takes 4-6 years to change the culture of a church. “So we are just starting to see the fruits of VCI efforts,” he observed.

Perhaps the best way to describe VCI is by looking more closely at those fruits by showcasing the renewal that has taken place in some corners of The Michigan Conference. MIConnect starts this week with Manistee United Methodist Church, located roughly 2/3s the way up the Lake Michigan shoreline in the new Northern Waters District.

Phase 1 of VCI at Manistee was shepherded by the Rev. Dave Selleck, who according to Gary Step, “didn’t want to coast into retirement.” During Manistee’s initial year, 2014-2015, Step says Selleck, “took Manistee through VCI and really transformed how they did ministry.”

The Rev. John Scott began his appointment to Manistee in 2015. He did not come without understanding of VCI. John went through Phase 1 of VCI at New Life UMC in Lakeview at the same time Dave was nurturing Manistee through Phase 1 and the receiving of prescriptions.

Scott explains some of the initial responses to Manistee’s prescriptions. “Probably the biggest change was in leadership structure. Manistee moved to a single-board governance model.” Worship times were changed and worship was enhanced with addition of a new sound systems. “We looked at how we needed to staff for the future,” John adds.

On the less tangible side, core values were established. Vision and mission statements were written. These were also important next steps. “VCI helped Manistee’s leadership team discover that the culture of the church was an obstacle to growth and health,” Scott says. Things had to shift and the development of a discipleship model included ways to help that shift take place. Through it all Scott says, “We didn’t lose anyone, but it was painful.”

Over three years, fruits have emerged. “We are seeing an increase in the number of visitors, particularly families with children,” Scott reports. A part-time Christian education director and a full-time youth pastor were hired. “We are reaching kids in the community who are gaining spiritually,” he continues.

According to the pastor, a crucial culture shift was “to move our ministries and our outreach from doing ministry to the community to doing ministry with the community. They formed a 501c3, River City Music School, where piano, guitar, drums, and stringed instruments are taught. The school includes Kindermusik, currently involving 60 persons. A new youth praise team is emerging out of the Music School and youth group that will enhance worship in 2019.

Manistee UMC has partnered with North Channel Brewing Company for care and landscaping of a section of the city’s River Walk. A partnership with the Chamber of Commerce helps develop community leaders. The church provides office space for the local Salvation Army. The church’s “Lawn Chair Brigade” is a favorite feature of the Fourth of July Parade each year.

“In the past people knew where the church was but didn’t know much about it,” Scott says. “Now when Manistee UMC comes up we hear, ‘Oh, you’re the church that’s so involved in the community.’”

These fruits were not born without challenges. Out of his experience in Lakeview comes a memory. “I remember,” Scott says, “hearing audible gasps when the prescriptions were read at New Life. It was hard for them to believe that a consultant would think that what they treasured and valued were not good things.”

And there were painful experiences in the turn-around in Manistee. “Gary Step talks about treasured traditions, valued relationships and personal preferences and he is spot on,” Pastor Scott notes. But obstacles can become opportunities. He cites the gorgeous but no-longer-working pipe organ with a $200,000 price tag for repair. “The Leadership Team is saying, ‘No way,’ but, I like this, they are also saying, ‘Think of the ministry we could do with that kind of money.’”

Rather than a quick fix, Scott believes, “VCI helps wake the church up to its cultural stumbling blocks that prevent growth and wakes the church up to seeking excellence in everything they do.” He credits VCI with providing a fresh set of eyes to see obstacles within the ingrained culture of a congregation and tools to help overcome those obstacles.

Scott cautions that “Just receiving prescriptions does not change your church. They are a wake-up call that requires a transformation process that is painful and won’t happen overnight.” He puts the process in a gospel context when he concludes, “I don’t think Jesus came to settle for the Temple in the condition it was in. Jesus was about transformation. He modeled ministry for the Temple people and they chose to do it their way instead of his way. They saw Jesus as a threat. VCI comes in and people also perceive it as a threat. But if they can embrace it and work through the painful changes that need to occur, transformation happens.”

Next week: another congregation transformed by VCI plus information from Gary Step about future developments of the Vital Church Initiative that will offer possibilities for participation by a greater number of churches.