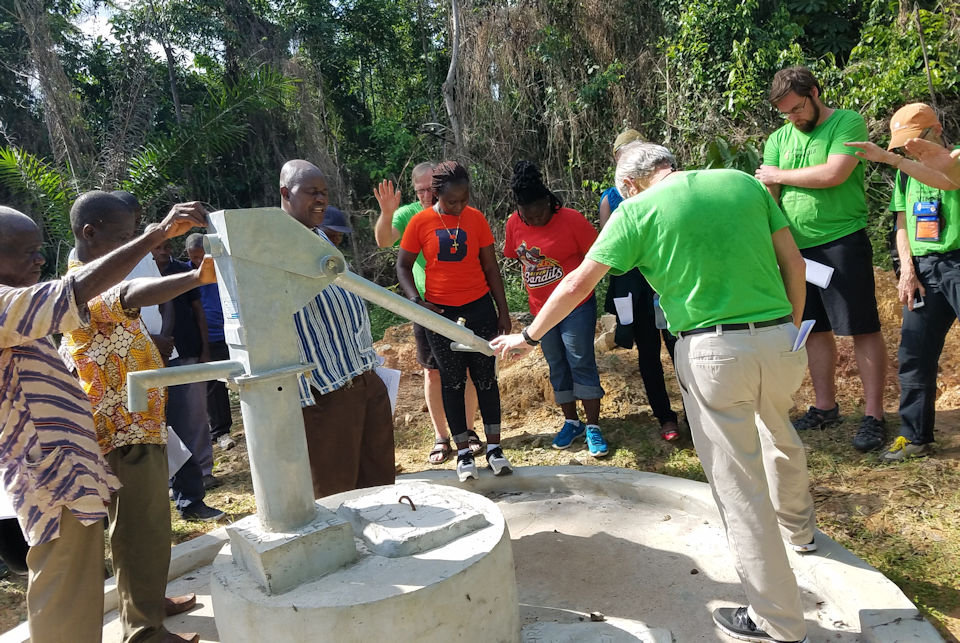 A highlight of the recent Michigan VIM trip to Liberia was the dedication of a well in memory of the late Billie Rench, a champion of mission in the Detroit Conference. ~ photo courtesy Jackie Euper

It’s a covenant, not a contract. Contracts are about money while covenants are founded in relationships. It was in that covenantal spirit that the Detroit and Liberia conferences came together in 1999. The Rev. Terry Euper has been involved in that partnership since the beginning.

Terry’s first trip to Liberia took place in 2005 when he accompanied the Rev. Duane Miller on a medical mission.

Since then, Terry has traveled to northwest Africa three more times, just returning from his most recent trip last week on November 8.

This was the first time that Terry served as the organizer of a trip. Eight others joined him on the two-week journey, October 25-November 8. Their sponsor, funding the project portion of the trip, was the former Crossroads District of The Detroit Conference. The team members themselves came from five of the new districts of The Michigan Conference.

A gift of $20,000 from the District Board of Missions was wired ahead to Liberia’s VIM Coordinator, Dehkontee Tarr. She saw to it that materials got purchased and projects got jump-started by Liberian workers before the Michigan team’s arrival.

Terry says it was an excellent trip that surpassed his hopes and expectations. The Michigan team knew they did not want to stay working in one place for two weeks. “Dehkontee and I worked together from the beginning, “he reports. “The success of the trip had to do with working directly with Liberian leaders to keep the focus on what the Liberia Church wanted.”

The Liberia Conference staff set the schedule and chose the stops along the way. The Michigan team visited five different sites. Here are some details with observations by Euper …

The highlight of the entire trip for many was the dedication of a well at a site between Monrovia and Ganta. VIM team members participated in a ceremony in the village of Tippita that honored Millicent “Billie” Rench. Billie, a Flint District resident and long-time supporter of the Liberia Covenant, contributed to water projects around the country. Team member, Jackie Euper, told Rench’s story during the dedication. The District Superintendent, Rev. Benedict Green, was present for the event. He related that his wife had benefited from a nursing scholarship given by Billie Rench in memory of her husband, Doug. “Talk about connection!” Terry Euper exclaims. Money for three other wells also came from the estate of Billie Rench.

Reflecting on the importance of the Michigan-Liberia Covenant, Euper explains, “The covenant has a lot to offer us and a lot to offer them. The key is to be able to respect one another fully.” He emphasizes the importance of real partnership. “This is not just a big, rich Michigan Conference doing something for the poor, little Liberia Conference,” Terry notes. “They have a wonderful spirit with much to offer us. While the financial assistance is significant, the encouragement that they receive in this relationship means an awful lot.”

Other team members echo Terry’s insights. Mel Leach retired and pastoring Hale: First UMC, says, “Our team went to Liberia to be a blessing to the vibrant church there. But instead, we were so flooded with the Joy of the Lord and Liberian generosity, that we turned out to be ‘the blessed ones’!” Mel adds, “Indeed, ‘Little is much when God is in it!!’”

This was the first trip to Liberia for Brenda DuPree, Chair of the Michigan Conference Board of Global Ministries. She celebrates the experience as, “another step in my faith journey.” She observes, “I am blessed to have spent precious time in conversation and work with our partners in Liberia, both committed United Methodist missionaries and others, over the years. So, helping with the progress at rural Bopolu Mission Station by painting the school was a joy!” Brenda looks forward to The Michigan Conference’s continued support of the 221 students at Bopolu. “Education is extremely important to them, even with challenges of travel and electricity. Needs are great, and we can work together to meet them.”

One trip participant, the Rev. Mike Seymour, was once a District Superintendent on the Cabinet of Bishop Judith Craig. Twenty-five years later, he finally realized his goal of visiting the Children’s Village established in her honor. His grandson, James Reynolds, was also on the VIM team. Another grandson, the Rev. Jon Reynolds, is the new chair of the Liberia Task Force of The Michigan Conference. Love for Liberia runs in that family.

And family ties are perhaps what’s at the heart of the Michigan-Liberia Covenant, after all. “We are part of the same family, under the same sky, the same stars!” says Brenda DuPree. And Terry Euper concludes, “What’s most important about our covenant? It lets the Liberians know that they have brothers and sisters who care about them.”

Fore more about the work of the Liberia Task Force of The Michigan Conference, click here.