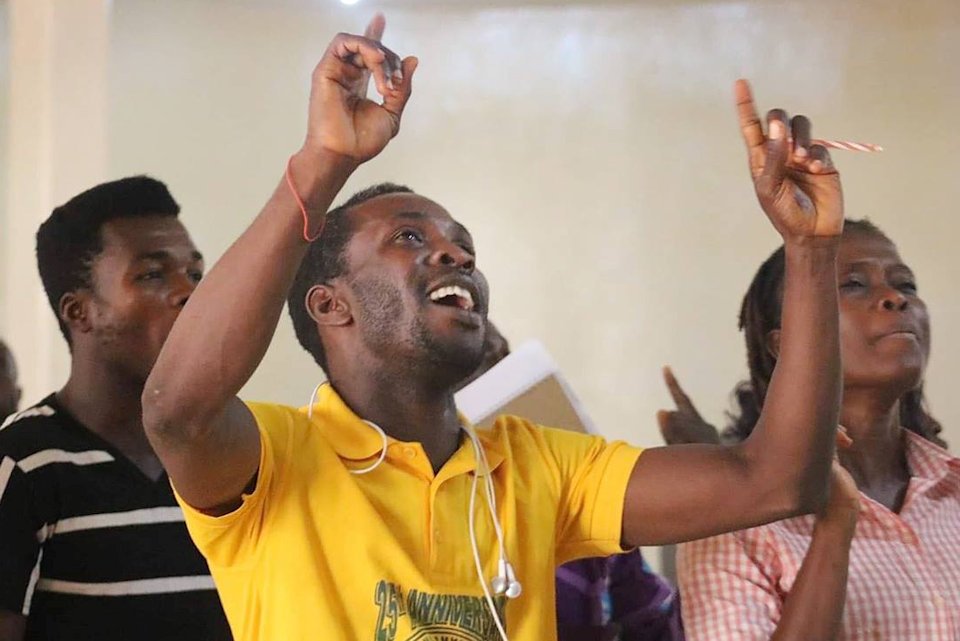 Young people sing during the Next Generation Forum in Monrovia, Liberia. The May 2 event focused on the future of young people in the church. ~ um news/E Julu Swen

The focus on young people is a major part of the Liberia Conference’s strategic plan for the next five years. Youth are excited about the future.

As young people continue to shy away from the church, The United Methodist Church in Liberia is frantically trying to recruit them to ministries — especially as clergy.

The Monrovia District Conference of The United Methodist Church in Liberia organized a conference, The Next Generation Forum: The Future of Young People, to discuss ways to address the issue. Over 100 youth attended the May 2 gathering in Monrovia.

The forum was a trial run. Similar events are planned in the 20 districts and one circuit of the Liberia Conference. Recruiting young people to the ministries of the church is a major part of the conference’s strategic plan for the next five years.

The Rev. Julius S. Nelson, Connectional Ministries board chairman for the church in Liberia, told the young people in attendance, “I am who I am today because of The United Methodist Church.”

Nelson said the church is able to continue its various ministries because those who are currently in leadership were trained through young people’s ministries.

While acknowledging the active role of some youth in the church, Nelson lamented their lack of enthusiasm about becoming clergy.

“The church has not been intentional enough to draw young people to the clergy ministry,” he said.

The Rev. George D. Wilson Jr., director of Connectional Ministries in Liberia, agreed, noting that the church has not made becoming clergy attractive to a new generation.

“Young people are not attracted to ministry in Liberia on account of the appalling condition of clergy who are already in the ministry — very low salary, no health insurance, no housing or transportation allowance,” he said.

He said he is hopeful that the Next Generational Forum initiative and efforts of the five-year strategic plan will change that perception.

Nelson said ministries of the church are struggling because many of those in charge are older or nearing retirement. He also cited a lack of resources.

He said the church depends on the youth to move its ministries forward into the future.

“We need pastors that will help make more disciples for the transformation of the world,” he said.

Nelson named the camping activities of the young people’s ministry as one of the programs that have not functioned properly in the past ten years.

“The camping program was our main source of educating young people about the operations and the ministries of the church,” he said.

“I think we cannot let the leadership of (the bishop) pass without reviving this crucial ministry of our church,” Nelson said. “If we don’t do anything about this ministry, the future of our church will not be good.”

Push Koffa, president of the Youth Fellowship of the Monrovia District, said young people in the church are concerned about being equipped to lead in the future.

“We are not simply interested in replacing the old people,” Koffa said. “We are interested in the church empowering us for future takeover.”

Koffa indicated there are youth interested in the various ministries of the church — including becoming clergy. However, he said there are often misunderstandings between young people and their local pastors due to a lack of regular communication.

He noted that oftentimes pastors aren’t supportive of the program ideas of young people.

“Our recreational activities are considered ungodly by most of our pastors, even though we conduct Bible studies and prayers at these gatherings,” he said.

Abraham Kipi, one of the adults attending the program, said that in the past, there was a mutual understanding between youth and their pastors.

“If the pastors did not approve of a program, we would not execute it,” he said.

Koffa said it is his hope that the leadership of the church will address such issues through the Next Generational Forum.

Nelson said he has seen some pastors and young people work well together because of the training they received through young people’s ministries.

“There were always presentations on the importance of youth in the life and ministries of the church at major gatherings,” he noted.

Kipi encouraged old and young in the church to cultivate a spirit of love, respect, and open communication.

He also urged church leaders to treat young people as an integral part of the church.

“We don’t need to hide things from young people and pretend that young people don’t have to know because of their ages.”

S. Emmanuel Lloyd III, president of the Monrovia District Young Adult Fellowship, said it was up to the leadership to rescue the church.

“If you want the young people to take over the church in the future, you must invest in them now,” he said.