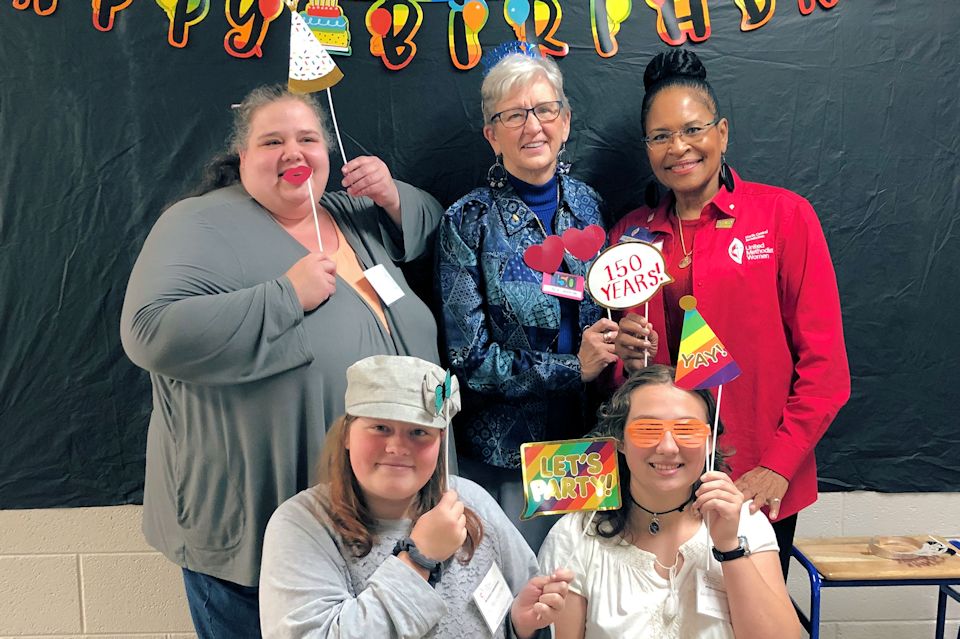 United Methodist Women is 151 years young and growing under the leadership of faithful women like President Linda Darrow, who leaves her post in December.

“Missional leaders not only feel the burden of God’s mission but they also act on the burden and act upon it sacrificially. Leading a missional church is not for the faint of heart. It takes courage to push yourself beyond your comfort zone and to lead the church beyond its personal limits. Brokenness, inner turmoil, and sacrifice will always be part of the missional leader’s life.”  – Gary Rohrmayer

“If I had known then what I know now about what was going to be involved, I might not have said yes to the invitation to serve.” That honest confession made with the wisdom of hindsight about the experienced challenges of leadership might easily be attributed to many of the great leaders of history. Life unfolds in surprising ways. Leaders help us all face life as it happens. The journey rarely goes as originally planned.

When she said, “Yes,” to serve, Linda did not know all that would be required of the UMW leadership team during her tenure.

So, why did Linda say yes to conference leadership? Because she valued the established relationship and inspirational example of the women who invited her participation. Linda said yes to service because she believes in the vision of the United Methodist Women which is “turning faith, hope, and love into action on behalf of women, children and youth around the world.”

Linda likes having an active part in a larger global organization of 800,000 women that raises $20 million a year for programs and projects related to women, children, and youth in the United States and in more than 100 countries around the world. Even more important to Linda, it feels right to her to be part of an organization that inspires and equips positive difference makers in local communities.

She is passionate about life-changing ministries supported by the Michigan UMW, like United Methodist Community House, the Joy Southfield Community Development Corporation in Detroit, and God’s Country Cooperative Parish in the Upper Peninsula, among others.

Linda believes in the core values of the United Methodist Women which promote:

Linda will tell you with pride that United Methodist Women are a global force for good in the name of Jesus Christ that traces roots to a group of eight women in 1869. Those women gathered at Tremont Methodist Episcopal Church in Boston and organized the Woman’s Foreign Missionary Society for the purpose of raising money to send two missionaries to India: a woman doctor, Clara Swain, and a woman educator, Isabella Thoburn. Those missionaries began the first women’s hospital and the first women’s college in Asia. That hospital, college, and the movement to address the global needs of women and children for the sake of Christ continue.

Linda Darrow is a laywoman from Mount Pleasant First United Methodist Church. Her life is a testament to the influence of a global connectional ministry. She was raised in the First United Methodist Church in Three Rivers and graduated from high school in Kalamazoo. Linda then got her college education in Mount Pleasant at Central Michigan University where she grew her practical faith and leadership skills as an active member in the University’s Wesley Foundation campus ministry and in Kappa Phi, a national interdenominational sisterhood birthed by the United Methodist Church that works on college campuses to promote the values of service, worship, fellowship, and study.

After graduation from Central, Linda married classmate Jon Darrow. Jon was also active in the Wesley Foundation at CMU. Linda taught high school in Lakeview and then helped raise three sons in Mount Pleasant while Jon served as Assistant Vice Provost for Academic Administration at CMU. Linda and Jon later ran a successful Bed and Breakfast in Alma, Michigan for 24 years. While living in Alma the Darrows were active members of the Alma United Methodist Church, where Linda served as the UMW president. Since retirement from the Bed and Breakfast and moving back to Mount Pleasant, Linda remained active in the UMW and also serves now as president at First UMC in Mount Pleasant.

Linda is generous with her praise for the great team of women who have helped her from across the state to navigate the transition from two annual conference organizations to a single new unified state-wide UMW organization. She learned quickly that the predecessor UMW organizations in both Detroit and West Michigan had different structures, traditions, and methods of managing resources. It helped the transition that leaders from across Michigan quickly adjusted to letting go of the old in favor of creating something new together. “Us” versus “Them” rivalries were avoided by embracing the idea of growing a greater “We.”

When nine new districts were formed in the new Michigan Conference, United Methodist Women embraced the change too and reconfigured their District Teams to correspond with the new organizational model for Michigan United Methodism. Linda attended eight of the nine inaugural District UMW meetings across the state, apologizing for missing one of the meetings scheduled at the same time as one of the other District meetings — she found it impossible to be in two different parts of the State simultaneously.

In October of 2019, Linda was pleased to help Michigan United Methodist Women celebrate the 150th Birthday of the UMW. The event, held at Howell First UMC, also marked the first-ever annual meeting of the newly united Michigan organization.

When this reporter asked Linda how many persons were paid to help maintain this statewide multi-dimensional ministry, her response was, “none.” At the state, district, and local level the United Methodist Women is entirely a volunteer organization. When asked about the challenges of geographical distance in keeping the organization together, Linda noted that UMW leaders in the much larger Mountain Sky Conference (Montana, part of Idaho, Wyoming, Utah, and Colorado totaling 460,000 square miles) have figured out how to stay connected.  By comparison, keeping connected across the 96,617 square miles in Michigan feels much more manageable to Linda.

Linda is convinced that the current denominational debate, that seems to be leaning toward denominational separation, will not lead to a similar divide within the United Methodist Women’s organization. She is confident that, “The United Methodist Women will stay in ministry together regardless of what the larger church decides. We believe in and practice full inclusion in our values and are committed to a greater vision for the church.”

Linda misses the fellowship of in-person meetings but acknowledges that “Zooming” together online in virtual meetings has allowed for greater participation, more efficiency, personal safety, and lesser expense. She notes that “Attendance at our virtual UMW meetings at the Conference and District levels has been excellent.” She can see that this new use of technology will continue to have a place in UMW functioning in a post-pandemic world.

Linda is especially pleased that even though the popular Mission U meetings held annually across the state had to be canceled, Mission U is being offered instead this year virtually and with the potential for a far greater reach. She noted she appreciated leadership given to the 2019 Mission University by the teaching of Bishop David Bard. Linda sings praise for the inspiration offered for this year’s Mission U, by the Rev. Dr. Devon Herrell, pastor of First United Methodist Church of Big Rapids. She leads what is the first-ever virtual Mission University class, “Finding Peace in an Anxious World.”

Linda is honest about the struggles of many congregations for survival during this pandemic. She is most appreciative of pastors who value the role and leadership provided to local congregations by vital United Methodist women.

As she ponders completion of her term of service as Conference UMW president at the end of this calendar year, Linda is optimistic about the future of the Michigan United Methodist Women. She believes in the great gifts for leadership already demonstrated in the service of Julia Paradine Rice of Schoolcraft, Michigan who has been serving as the Mission U Treasurer. Julia begins her service as the new president of the Michigan Conference United Methodist Women in January 2021.

Linda is looking forward to her continuing work in UMW leadership in her local church and community. With the gift of hindsight, Linda can feel more readily the responsibilities of leadership in a challenging time.

The Michigan Conference gives thanks to God for all the people who say, “Yes,” when asked to serve. Thank you, Linda Darrow, for your faithful leadership. Well done, good and faithful servant. Well done.