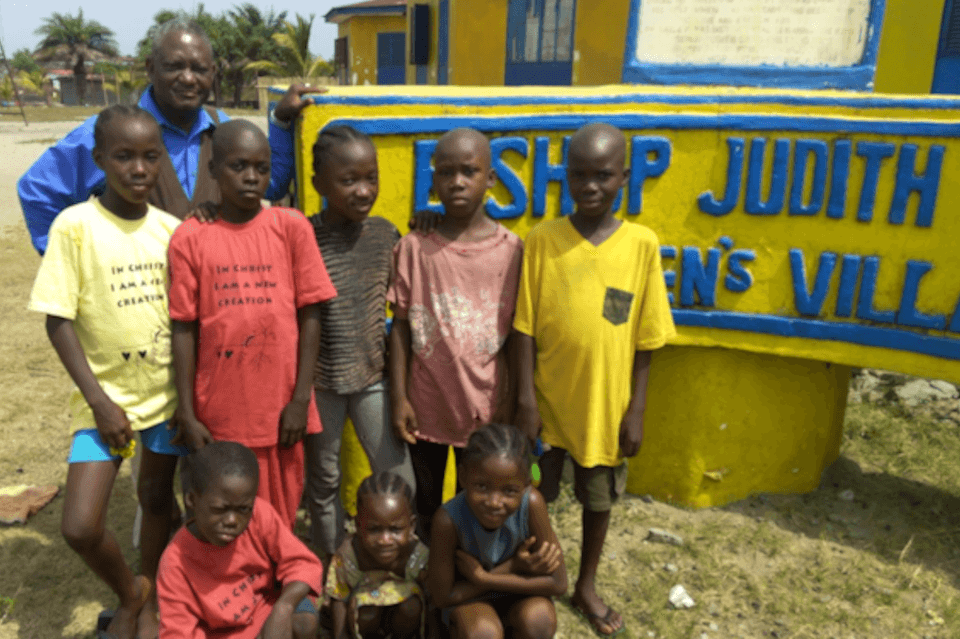 Rev. Robert Sieh, Director of the Bishop Judith Craig Children's Village, stands with some of the 70 residents of the facility in Liberia. ~ photo courtesy Robert Sieh

The  Bishop Judith Craig Children’s Village that serves Liberia’s orphans, is now 20 years old. The 2019 Annual Conference Ingathering will help spruce up the housing there.

Construction of the Bishop Judith Craig Children’s Village took place during the 1990s and doors opened in honor of Bishop Judith Craig in 2000. Today, almost two decades later, 69 orphans live in nine cottages on the site. Other buildings in the complex house a clinic, classrooms and administrative offices.

The Liberia Covenant Partners receive 45% of the financial ingathering received at opening worship during Annual Conference. They have designated the 2019 funds to support cabin maintenance at the Judith Craig Children’s Village.

The existing cabins have faithfully done exactly what they were constructed to do; provide shelter to children who were orphaned because of the civil war and the Ebola crisis in Liberia. The buildings are beginning to show signs of the wear and tear any building would show after housing children for 20 years.

Can you imagine life after a war without your parents, or a familiar place to sleep? The staff at the Judith Craig Children’s Village in Liberia are incredible examples of Christ’s love. When I was at the orphanage two years ago, some of the staff there were caring for the children despite not having been paid for several months. When I asked the staff how they were surviving the director, the Rev. Robert Sieh, said “It’s a calling right?” Sieh was not being paid himself at the time.

The children in the orphanage now are there because their parents were lost in the ebola crisis. The staff are now regularly receiving their wages and in general things are going well for the orphanage. Some of the cottages however, have fallen into stages of disrepair because of deferred maintenance during lean financial times. This year the Liberia Partnership Team encourages generous of the ingathering that will enable the Judith Craig Children’s Orphanage reopen some of the cottages that  have closed over the years due to the deferred maintenance.

More cabins make it possible to assist more children. Let’s do it for the kids and to honor the memory of Bishop Judith Craig, who died on January 18, 2019. Bishop Craig served the Michigan Area from 1984 to 1992.