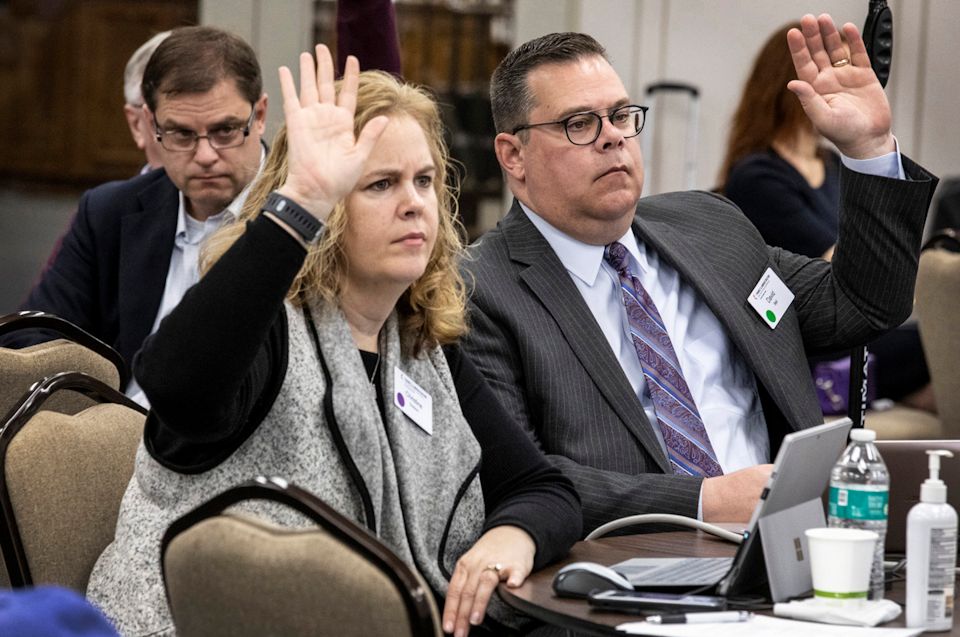 Christine Dodson and the Rev. David Bell, General Council of Finance and Administration board members, raise their hands during a meeting at Scarritt Bennett Center in Nashville, Tenn. The board voted to send the smallest budget the General Conference in more than 30 years. Bell is the Executive Director of the United Methodist Foundation of Michigan. ~ UMNews photo/Kathleen Barry

Here are two national and global headlines that should not be missed as we respond to the coronavirus emergency.

POTENTIAL SPLIT LEADS TO DEEP BUDGET CUTS
Heather Hahn, UM News
March 11, 2020 | NASHVILLE — Faced with the possible departure of multiple churches, United Methodist leaders are preparing the smallest denominational budget in more than 30 years. The General Council on Finance and Administration board, by a 9-7 vote, approved proposing a 2021-2024 general church budget with the bottom line of about $413.4 million.

General Conference will have the final vote on the four-year budget when the denomination’s top lawmaking body meets May 5-15 in Minneapolis. The finance agency board’s proposal represents about $80 million less than the already historically low budget of $493.8 million that the board initially planned to submit. And it is substantially less than the most recent $604 million budget General Conference passed in 2016.

What this means is that denomination-wide ministries supported by church giving — including seminaries, bishops and most of the general church agencies — will need to prepare for dramatic cuts to their work and potential layoffs. “We’re still talking about significant reductions,” Christine Dodson, board vice president and North Carolina Conference treasurer, told the GCFA board. “There’s no doing more with less. We’re doing less with less.”

The current proposal will be the lowest budget submitted to General Conference since 1988, according to the United Methodist Commission on Archives and History. READ MORE.

UMCOR-TRAINED VOLUNTEERS WORKING TO HELP TENNESSEE RECOVER
Dan Curran, General Board of Global Ministries
March 6, 2020 | ATLANTA — Dozens of UMCOR-trained volunteers are working throughout middle Tennessee to help their brothers and sisters recover from the EF-4 tornado that left a path of destruction across regions of the state on Monday, March 2.

UMCOR began providing support to its local partners mere hours after the tornado struck. Angela Overstreet, an UMCOR consultant and trainer based in Nashville, provided immediate assistance to the Rev. Robert Craig, the Nashville Episcopal Area of The United Methodist Church disaster response coordinator. Craig and Overstreet met with other agencies in the area to begin coordinating response efforts.

“Our trained early response team members have responded quickly across the conference where so much destruction is left in the wake of the tornado Monday night,” Bishop William T. (Bill) McAlilly, bishop of the Nashville Episcopal Area, wrote in a conference update. The area includes the Memphis and Tennessee Conferences that cover middle and west Tennessee and western Kentucky. “Leaders are stepping up offering help and hope. Numerous conferences are inviting offerings to support our response efforts. We are so very thankful for all of this support.” READ MORE.