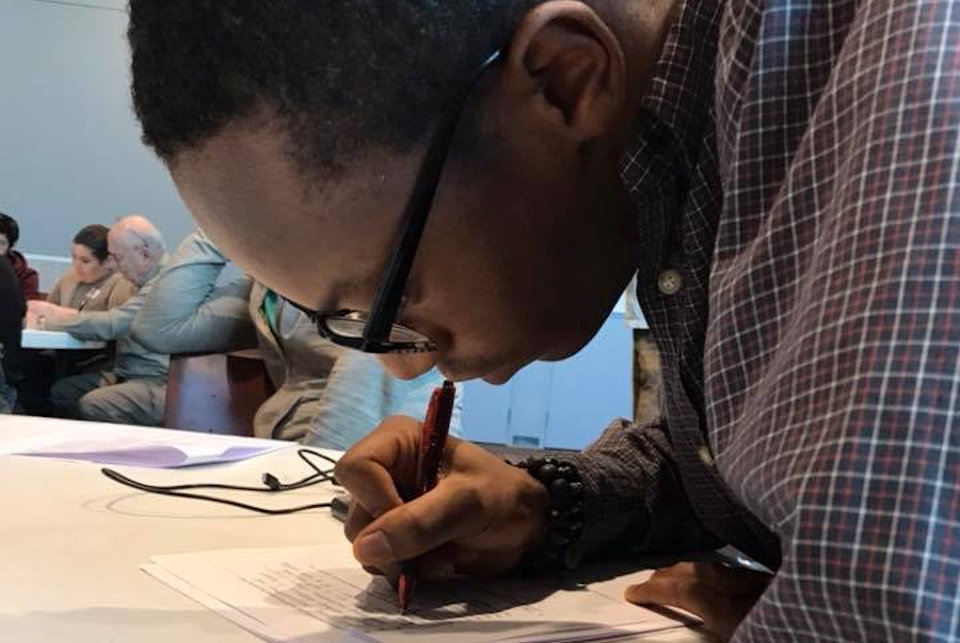 In January 2018 an ERRACE (anti-racism) workshop was held at Kalamazoo Wesley WMU as part of an EncounterMICall experience for campus interns. ~Facebook photo

The General Board of Higher Education and Ministry has  funded a program that helps young leaders with discernment for ministry, EncounterMICall.

NASHVILLE, Tenn., August 20, 2018 – As the leadership development agency of The United Methodist Church, the General Board of Higher Education and Ministry (GBHEM) has selected 21 grant recipients for the Young Clergy Initiative (YCI). Once again the Michigan Conference program, EncounterMICall, is among those grant recipients. The grants are awarded annually to programs focused on increasing the number of young clergy in The United Methodist Church by helping young people listen for, discern and respond to God’s call to ordained ministry.

“There’s not a shortage of call in the church. Instead of waiting on youth to tell us they think they’re called to ordained leadership, we need to be proactively helping youth and young adults discern who God has created them to be and where God is calling them to lead,” said Rev. Dr. Trip Lowery, director of young adult ministry discernment and enlistment at GBHEM. “The Young Clergy Initiative supports the work of leaders who are engaging youth and young adults in effective, innovative and experimental ways so we can share what’s being learned in one context with leaders doing work across the connection.”

Each year grant applications are accepted from January to March and awards are distributed in the summer. Award amounts and recipients are decided by a fund distribution committee from the GBHEM Board of Directors. This year, grants have been awarded in varying amounts based on project scope, with some being awarded over the period of several years for ongoing projects.

YCI was established at the 2012 General Conference as a $7 million fund and designed to “increase the number of young clergy among the jurisdictional conferences.” The initiative was developed for a three-quadrennia period (12 years) and is reassessed every four years at General Conference. In the first quadrennium, 78 grants were supported using the allotted funds. The amount disbursed in that period totaled about $5.5 million, since the funds available are dependent on giving to the World Service Fund. The 2016 General Conference designated an additional $7 million to be used for grants in the current quadrennium (2017-2020). The YCI fund is administered by GBHEM.

The first YCI grants were awarded in 2014 and Michigan received $64,000 at that time. EncounterMICall was designed in the fall of 2014 by three clergy in the Michigan Area — Revs Paul Perez, Carl Gladstone, and Lisa Batten. It established a network of interns sent from campus to be mentored in local churches.  Click here for background. Now EncounterMICall 2.0 is helping young people gain experience and skills for ministry.

“We’re noticing many effective experiences are engaging youth earlier in the discernment process than we’ve historically seen. Youth are thinking about their call and purpose as early as elementary school. We need to begin the vocation conversation early,” added Lowery. “Affirming the gifts we see in children, youth, and young adults is another simple way we can help them discern who they are called and gifted to be. Many of the YCI experiences are finding creative ways to intentionally affirm where leaders see God moving in the lives of those around them.”

To learn more about YCI, current projects, and findings, visit ExploreCalling.org/YCI. An update on EncounterMICall is coming this fall.