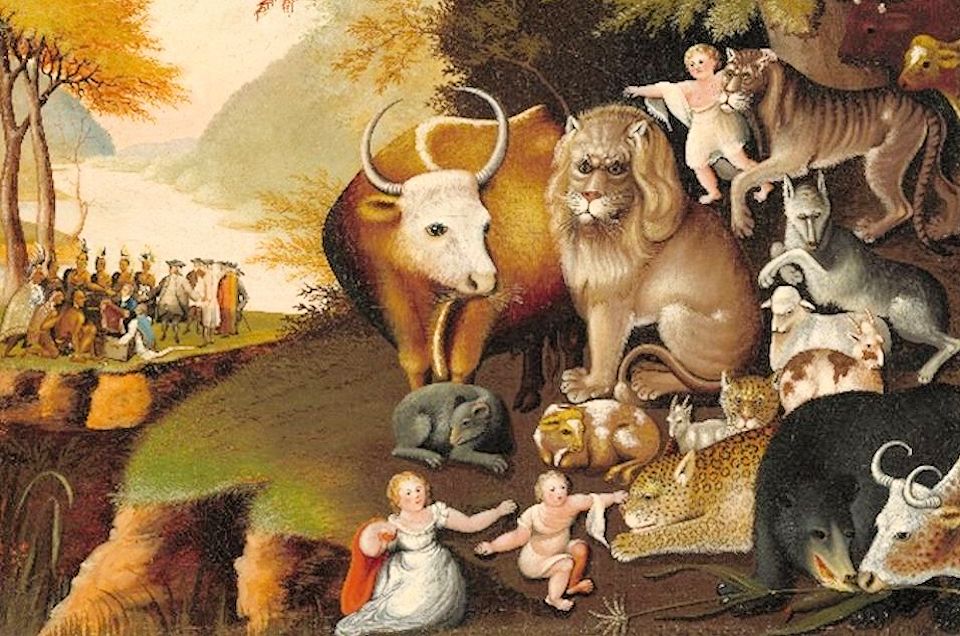 Edward Hicks, a popular Quaker preacher from Pennsylvania, used oil and canvas in 1840 to depict Isaiah’s vision. Tiitled “The Peaceable Kingdom,” hangs in the National Gallery of Art in Washington, D.C. ~ Creative Commons

Consider an enduring dream from God for a peaceful world and our vexing problem of gun violence in America. Both have the power to change lives. Neither God’s vision nor our chronic gun problem will leave us alone. Both are matters of life and death. Both deserve our attention.

The Hebrew prophet Isaiah, who served between 740 and 698 BC, is credited with an early articulation of God’s desires for peace. Isaiah shared a vision of the day when “the wolf will dwell with the lamb, and the leopard will lie down with the kid, and the calf and the young lion and the fatling together; and a little child will lead them” (Isaiah 11:6 ASV).

Thirty-seven years ago, Isaiah’s vision inspired me to start hobby work on a crewel embroidery kit that features his dream. The project took me two years in my spare time to complete. As the picture filled in, one stitch at a time, I had regular occasion to ponder Isaiah’s hope. Isaiah’s vision for peace awakened for me a life-shaping insight that relates directly to our national problem with gun violence.

Consider with me significant facts relating to our national problem of gun violence. We will then return to Isaiah’s vision for peace for inspiration in formulating a faith response to our continuing problem.

Facts about gun violence in America

There is no denying that we have a significant problem with gun violence in America. On March 22, 2021, ten victims, including a police officer, died at the hands of a gunman using rapid-fire assault weapons in Colorado,  just five days after eight victims, including six women of Asian descent in Atlanta, GA were gunned down in an unrelated mass shooting. On March 26, 2021, eight people were injured and two killed in a mass shooting event in Virginia Beach, VA. Three more were killed, and two additional persons were injured on the very same day in another mass shooting event in Memphis, TN. Other mass shootings in March occurred in Maryland, California, and Indiana.

The Gun Violence Archive is an online data source that continually monitors national gun violence statistics. In 2020 19,379 Americans died from gun violence. An additional 24,156 persons used a gun to commit suicide. There were 611 verified mass shootings and 21 mass murders in America last year. Sadly, 299 of last year’s American gun fatalities were children under the age of 11, and 1,073 of those killed by guns were teenagers.  This is a 10% increase in American gun violence fatalities over 2019.

In the first three months of 2021, 4,521 persons have been killed by gun violence in America. An additional 5,940 have used a gun to commit suicide. We have already had 118 mass shootings and seven mass murders. Data from earlier years in the Gun Violence Archive document the chronic nature of our problem.

The United States currently ranks 32nd in the world in the level of gun violence per 1,000 people. Many countries in Latin America that are torn by drugs and gangs have higher rates of gun violence per capita than the U.S., but our rate of gun violence is eight times higher than neighboring Canada, 100 times greater than the United Kingdom, and even multiples greater than that when compared to China and Japan. It is hard to grasp this high level of American gun violence in light of the facts that we have only 4.25% of the world’s population, 30% of the world’s wealth, and 75% of us profess to be Christians with a presumed commitment to follow the ways of Jesus. The United States is proof that affluence and faith affiliation do not guarantee security from gun violence against ourselves.

A major part of our problem with gun violence is guns. Americans own 46% of the total firearms ,globally, amounting to 120.5 firearms for every 100 civilians. This proximity to lethal weaponry contributes to higher rates of gun fatalities in America and handicaps any attempts to reduce gun violence by legislation alone. The Brady Handgun Legislation Act, passed by Congress on November 30, 1993, and named in honor of James Brady, who was shot and wounded by John Hinckley Jr. during an attempted assassination of President Ronald Reagan on March 30, 1981, already requires criminal background checks and is supposed to prevent gun sales to convicted felons. The bill has led to more than 202 million background checks on prospective gun buyers and has blocked the sales of 1.2 million gun purchases, about 0.6 percent of total sales. Gun control advocates understand both the progress being made and the remaining loopholes in this important law.

“Gun violence is the ugly exposed tip of a massive iceberg of social dysfunction.”

In 1994, Congress passed the Assault Weapons Ban on sales of military weapons for use by civilians in the United States. For ten years before a sunset provision in the original bill, this ban was in place, and the failure of Congress to renew the ban allowed the law to lapse in 2004. A reference article about this legislation suggests that “studies have shown the ban has had little effect in overall criminal activity, firearm homicides, and the lethality of gun crimes, though there is tentative evidence that it decreases the frequency of mass shootings.”

Polling by the Pew Research Center in 2019 shows that public support for stricter gun control legislation has risen to 60%.

Advocates for stricter government controls on gun sales such as age requirements, mandatory background checks, waiting periods, licensing exams and fees, a renewal of the former ban on the civilian purchase of military assault weapons, and requiring attendance at gun safety classes argue that we have these helpful requirements already in place for the privilege of driving a motor vehicle but far fewer requirements for owning and using a lethal firearm. Yet, even with mandatory training and licensing for the privilege of driving, an average of 29 Americans per day were killed by drunk drivers in 2020. 42,060 people were killed in all forms of traffic accidents in 2020. Licensing and training for drivers may lessen traffic fatalities but will not eliminate them. We can similarly anticipate that licensing and training for gun ownership by itself will not eliminate gun violence.

Opponents of stricter gun controls argue against the infringement of constitutional rights and warn of the dangers of greater government control. Gun rights activists regularly remind us that murders have been a part of humanity since Cain killed his brother Abel in the Bible (Genesis 4:1-18). Some don’t want to pay for another expensive level of government bureaucracy to enforce rules not likely to deter criminals. They also point to the millions of law-abiding gun owners and nearly 20 million who also have concealed carry permits who serve as potential deterrents against the random violent gunman. Gun rights advocates defend the right of citizens to bear arms as a necessary check on a potentially abusive government. It should be noted by way of rebuttal that with this great freedom to bear arms, Americans are killing themselves at a rate comparable to annual military casualties suffered during World War II.

Another major reason many politicians resist reform in gun laws is financial. According to Forbes magazine, guns are a 28 billion dollar annual business in the United States. The gun industry reports 46,679 persons are employed in manufacturing guns and ammunition in the United States. Michigan has 16 weapons manufacturing businesses listed. Representatives regularly defend the interests of businessmen who are constituents and also generous financial supporters. Gun sales trend up predictably when people are afraid. In addition, our U.S. military budget, which supports military contractors who manufacture weapons for our defense and for export, is 706 billion dollars in 2021.

If we also consider:

All these factors contribute to a seemingly endless cycle of gun violence, public calls for action, congressional hearings, political foot-dragging by elected decision-makers, and kicking the issue of gun control reforms down the road until we get distracted in the public news cycle and shift our attention away to other pressing issues of national importance.

Gun violence is the ugly exposed tip of a massive iceberg of social dysfunction. We are all complicit in a culture that profits from this violence. Our government has been resistant to change how we deal with this chronic gun violence problem for many reasons, that all ring hollow in a funeral home during services to remember victims and grieve with survivors.

Those who have experienced personal loss to gun violence will never let us forget our terrible problem. In my recent memory, innocents have died from gunshots in places where guns have no business, like schools, universities, churches, synagogues, movie theaters, shopping centers, grocery stores, nightclubs, homes, and public celebrations. These deaths have often come at the hands of individuals who express their anger with deadly bullets and increasingly of late with military-style assault weapons that have no logical civilian use.

Thank you for not shying away from the hard facts about our gun violence problem in America.

Return with me to Isaiah’s dream of a more peaceful world. During those two years of stitching my crewel project, the insight I received is that Isaiah’s dream of a peaceable kingdom is only possible if all of those in the picture are secure, have enough, and are raised in love to trust each other. Those in the frame need to understand that life’s picture is not whole unless everybody is in it. Isaiah’s dream of peace reminds us that in God’s math, everybody counts. Otherwise, the predators dominate, and .the weak live in fear or perish. Isaiah’s vision for peace does not happen naturally. God’s desires expressed in Isaiah’s dream require a strong guiding hand, a culture of trust, and a willingness to live practically in ways to help make this hope a reality.

Others in the Bible share Isaiah’s holy dream for a more peaceful world. Micah, a contemporary of Isaiah, dreams of the day when nations will “beat their swords into plowshares, and their spears into pruning hooks.” (Micah 4:3 NRSV)

Jesus urges us in the ways of peace when he instructs, “Blessed are the peacemakers, for they will be called children of God.” (Matthew 5:9 NIV).

The Apostle Paul in Galatians 6:7 NIV adds to our understanding of what is needed to grow a more peaceful world when he notes that, “A man reaps what he sows.”  If we want to do more than hope for a reduction in gun violence in America, we need to plant and nurture seeds for peace.

Isaiah’s dream for peaceful co-existence inspired artists like Edward Hicks, a popular Quaker preacher from Pennsylvania, whose 1840 depiction of Isaiah’s vision, titled “The Peaceable Kingdom,” hangs in the National Gallery of Art in Washington, D.C.

Aware of the issues, let us choose to live with intention toward the fulfillment of God’s enduring dream for peace. Here are ten practical things we can do for the cause of peace.

God,
Help us to never become indifferent to this problem of gun violence in America.
Strengthen our resolve to live daily in the direction of your heavenly dream for a peaceful world. Amen