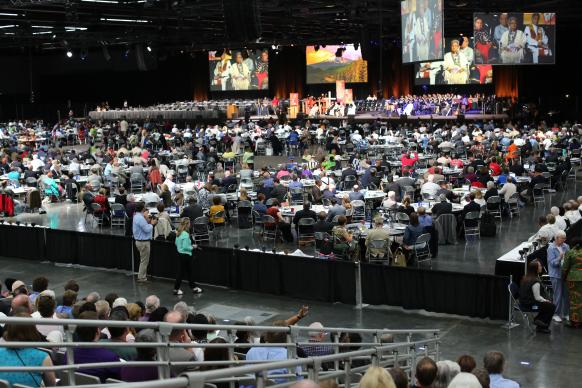 General Conference 2016 made a decision to put the issues of human sexuality on hold. Since then, three openly gay pastors are candidates for episcopal elections when the five U.S. jurisdictions of The United Methodist Church meet July 13-16. ~umns photo/Kathleen Barry

All three said they have been wrestling with God’s call to be bishop candidates.

Meredith said his call also came to him during General Conference 2016 held in Portland, Oregon, May 10-20.

“God began speaking to me at General Conference, at first with that still small voice, and then God and I began to have late night wrestling matches,” said Oliveto, who is senior pastor of Glide United Methodist Church in San Francisco.

Wulf, pastor of United University Church in Los Angeles, confessed that after his first experience in 2008 he wasn’t sure he could do it again. Wulf will become pastor of Echo Park United Methodist Church on July 1.

After much time of “agonizing and soul-searching prayer,” he said knew he too was hearing a call from God to step forward as a candidate for bishop.

The United Methodist Church is divided into five areas known as jurisdictions: Northeastern, Southeastern, North Central, South Central and Western. There are 15 bishops to elect, due to retirements.

The United Methodist Church has been struggling with full inclusion of LGBTQ people for more than 40 years. General Conference 2016, the denomination’s top legislative body, made a decision to put the issues of human sexuality on hold and allow the bishops of the church to form a special commission to examine those portions of church law that deal with human sexuality.

Bishop Bruce Ough, president of the United Methodist Council of Bishops, said he would like to see conferences and individuals honor the legislation approved by General Conference.

The General Conference essentially “hit the pause button,” Ough said. “Personally, I would like to see people and conferences honor that.”

Annual conferences have been holding meetings during the summer and many have made declarations of “nonconformity” with the General Conference and the Book of Discipline.

The church does not allow gays or lesbians to be ordained clergy; however, many clergy have been coming out before and after the General Conference.

“The United Methodist Church has not been willing to engage in conversation — open and honest — with LGBTQ persons and have instead made an ‘issue’ of our lives. As a church, we can do better,” said Oliveto.

Oliveto and Meredith are in same-sex marriages, and Wulf said he is in a “long-term covenanted relationship.”

“It is regrettable that we have reached the point of such open defiance of the decisions made in good faith by our global United Methodist Church,” said the Rev. Thomas Lambrecht, executive with Good News, an evangelical United Methodist organization that upholds the church’s current stance on homosexuality issues.

“The disrespect shown to our brothers and sisters in Africa, Asia, and Europe, not to mention United Methodist evangelicals in the U.S., is staggering.”

The Rev. William Lawrence — former president of the Judicial Council, the church’s top court — said that if an openly gay person were elected bishop, anyone in the denomination could file a complaint. Some evidence, such as a wedding license, would be needed to merit processing of the complaint, he added.

The Rev. Alfred Day, top executive of the United Methodist Commission on Archives and History, said a newly elected bishop could be charged and those charges would first go to the jurisdictional college of bishops.

Day said he didn’t believe the denomination had ever had an openly gay bishop.  “‘Openly’ being the operative word, I’m sure there are none,” he told United Methodist News Service.

“To elect a self-avowed practicing homosexual as bishop would push many traditionalists over the edge of what they could tolerate, jeopardizing the unity and the funding of the denomination,” Lambrecht said.

Meredith said in his conversations with orthodox, conservative brothers and sisters he understands the inclusion of LBGTQ people in all parts of the church, for them, is unfaithfulness.

“I am very supportive of the Bishop’s Way Forward (General Conference 2016 legislative plan),” said Oliveto. “I believe that what this commission will discover is that while matters of human sexuality are the symptom, the dis-ease within our denomination is cultural and theological and it is impacting our ability to create disciples of Jesus Christ for the transformation of the world. Unfortunately, LGBTQ persons have paid a harsh price for our neglect in speaking the truth about our denomination.”

“I am a person in ministry as are Karen and David, we have done faithful ministry for decades in the United Methodist Church — very effective ministry. We are set apart because we identify as lesbian or gay but we are not totally defined by our sexual orientation,” Wulf said.

“We are people who are working faithfully and effectively on behalf of the church and the gospel of Jesus Christ. We all have full, well-rounded ministries,” he added.