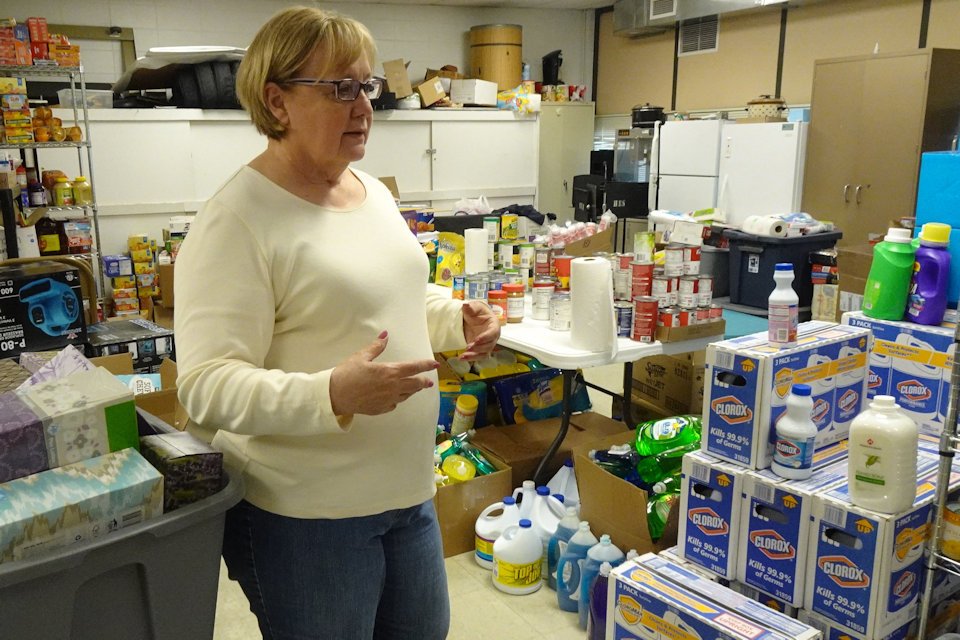 With farms, homes, and businesses literally underwater, residents of Hamburg, Iowa are finding strength through the church and the community.

Virginia Lynn, 93, has lived in Hamburg, Iowa, her entire life and not once experienced the floodwaters that have hit the town. Until now.

Lynn moved to the Park Washington Plaza apartments in July from the home she raised her family in after her husband passed away last January.

“I kept telling everybody I was so blessed because after I lost my husband my kids took me to visit, I sold my house and then I moved,” she said. “It’s just mind-boggling to me. I have literally lost everything. It’s just hard to understand how much I have lost.”

The low-rent apartments housed several elderly residents who were evacuated at 4 ‘o clock in the morning the day the floodwaters began to rise. Many only escaped with the clothes on their backs and were left to wonder what had become of their homes.

A flagpole stands in the middle of Main Street near the apartments are located. Residents of Hamburg say that the water has never made it past that point. This year was different.

“The water was rising an inch every 15 minutes when it was coming in,” said Pastor Luke Fillmore, who serves United Methodist churches in both Hamburg and Shenandoah. “They put a berm up trying to stop it. It came crazy fast and it just flowed over.”

A response crew helped Lynn walk through her mud-filled apartment and showed her what could and couldn’t be saved. She lost important papers, her entire billfold with her drivers’ license, and her Bible that she always kept close to her.

“I had my “Mornings with Jesus”, “Upper Room”, and my Bible on an end table, and of course it’s gone,” Lynn said. “The Bible was just corroded with mud, so now I’m going to start over with a new one. It’s not going to be any different. It’s still going to have the same words in it.”

Lynn is thankful for her church family and for Pastor Fillmore, who has only been her pastor for seven months. Now, he’s working on building “social capital” in his new communities.

“There’s a lot of trust I’ve already built and a lot of trust being built, but it’s taken a lot of humility to step back and say ‘I can only do what’s been put in front of me,’” Fillmore said. “God has only given me so much to do, and the rest of it I have to trust is being taken care of both physically and spiritually.”

READ and VIEW MORE of how Hamburg’s churches are stepping up.