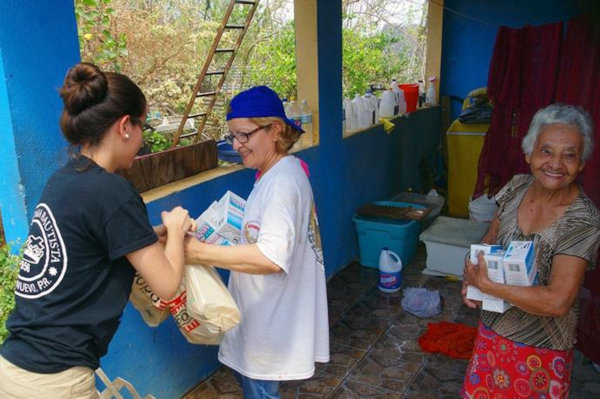 Water and food are the most pressing needs of families living in the Jayuya area. The Methodist Church of Puerto Rico has enacted an emergency strategy to help alleviate suffering. ~umns photo/Rev. Gustavo Vasquez

While a storm is about weather, it’s also about people. Here’s who UMCOR is helping.

This collection of stories written by the United Methodist News Service provide a window into the scope of relief and recovery efforts taking place following the hurricanes of September.

The Cleaning Buckets and Hygiene Kits that left Michigan for the Midwest Distribution Center in Chatham, Illinois will soon leave that supply hub for use in areas such as these. United Methodists in Michigan join thousands of people across the country in making the “connection” come alive. That connection brings help and hope to neighbors and transforms the world.

Puerto Rican Bishop: ‘This is a catastrope’

The Methodist Church of Puerto Rico has activated an emergency strategy to respond to community needs following Hurricane Maria.

“My definition of the situation is the same as FEMA’s and other government entities,” Bishop Hector Ortiz wrote in an Oct. 4 letter explaining the church’s initial plans. “They have all said that ‘this is a catastrophe.’”

While the Puerto Rican church has the support of the United Methodist Committee on Relief, resources are limited for now. “The complexity of this catastrophe has delayed the support that we need,” the bishop said in the letter. “We have been out of power, out of communication, and many of the local routes are blocked or destroyed. It has been a big obstacle to complete an evaluation of the situation around our churches.”

Assistance will be needed to provide a complete assessment of the post-Maria situation, Ortiz said, but Puerto Rican Methodist leaders are doing what they can. He encouraged donations to UMCOR and the Puerto Rican church’s social holiness agency to help buy needed supplies, including water, food, batteries, solar light bulbs and radios.

“We have been using our financial reserves to help people in need around our churches,” he wrote. “We have been taking different initiatives to help our neighboring communities. We opened a church in the southeast (where the hurricane made landfall) as a collection center to prepare food packs for people who are blocked off and out of food.”

In the poor suburban neighborhood of Barrio Obrero near San Juan, for example, a food pantry at San Pablo Methodist Church has served some 5,000 meals to the community, the bishop said. READ MORE.

The pastor and people of First United Methodist Church in Rockport are making their way toward the future one day at a time. In a town where many road signs are down, and directions can start with, “You know where the big crab used to be?” the sense of disorientation in their own town continues. But it’s starting to get better.

The first weekend in October, I drove around with my ordination buddy and former fellow associate pastor at First UMC in Victoria, Rev. Laura Hewett Becker. She showed me areas of town that just a week or so ago weren’t possible to enter. We toured Copano Cove and Copano Heights, where some of her church members and staff lived. I saw for the first time homes with the front and back walls completely blown out. Trailers and mobile homes were twisted and ripped open like tin cans; big double-wide mobile homes were flipped upside down or had whole sides missing.

Laura’s husband, William, remarked that the people who lived there were now going to have nothing. He remembered buying a trailer back when it was all he could get a loan for, and he had to talk his way into getting it insured. Repairing his own, he said, taught him why no one wants to insure them.

We drove to Key Allegro, where my sister and her husband used to live. Brightly painted in the tropical tradition, their home was known by my kids as “the pink house.” While an upscale neighborhood, Key Allegro included many houses that were old and made of wood, and the destruction there was stunning. As we rounded the corner, I saw that the lot where my sister’s home used to be was completely cleared, nothing left at all.

The folks who had bought the house lived there year-round, unlike many other homeowners on the key, and they had priority over their neighbors for clean-up. I felt like I had been punched in the gut, remembering family trips to visit and the love my children experienced from my sister and brother-in-law. READ MORE.

For a disaster survivor, it’s this simple: Green is good; orange is bad.

Once urban search-and-rescue teams clear a house, they place a fluorescent sticker in a window. Green means the house is still livable. Orange stickers are for homes that are deemed uninhabitable. The distribution of stickers throughout Bonita Springs is about 50-50.

Many parts of Florida were already deluged with rain from Hurricane Harvey, which struck Texas on Aug. 25, before Hurricane Irma made landfall Sept. 10 at two different locations and spread across the state. The floods that followed Irma provided the knockout punch.

“Basically, we had a flood, a hurricane and a flood,” said the Rev. C.J. Hill, pastor of First United Methodist Church of Bonita Springs.

As soon as the storm hit, the disaster response team of the Florida Conference sprang into action. The conference spans the length of the peninsula, so just about every district was affected.

Two weeks after the storm, there are still many areas that Pam Garrison and the Rev. Laura Ice have yet to see.

“We will focus where we’ve got churches interested in being involved and also communities that have been overlooked,” said Garrison, the conference’s disaster response coordinator.

“The state and FEMA will focus on higher population areas, so our niche is going into areas where nobody wants to work. But God loves them, too.”

Ice, the recovery coordinator, praised the initial church response. “Most of our pastors in impacted areas began immediately to communicate with their congregations and community to find out their needs. Within days we were able to match up churches in areas less affected to begin collecting and delivering goods,” she said.

As an example, Ice cited First United Methodist in Sebring, which began feeding people because the neighborhood had no electricity.
“They said, ‘We have gas, we can cook food, we’re gonna open the doors.’ Other churches responded by sending them food — they didn’t have to buy anything.” READ MORE.

How did Michigan United Methodists respond to this disaster. See the companion feature, “Hands of the storm.”