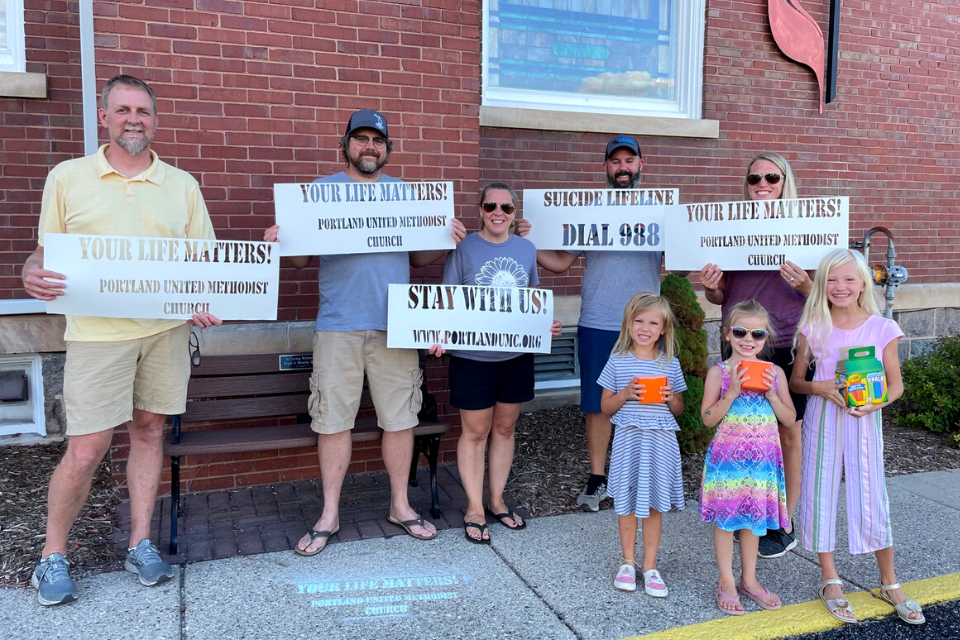 Deacon Michelle King gives tips on how to talk to a friend about suicide and a few examples of what Michigan United Methodist congregations are doing to address this critical issue.

REV. MICHELLE KING
Chair of the Division on Disability Concerns, Michigan Conference Board of Justice

September is National Suicide Prevention Awareness Month. Suicide is a topic that is near to my heart, having been on both sides. When I was in middle school, I attempted suicide, and a few years ago, I had a friend die by suicide. I am by no means alone in having these experiences. National statistics show that in 2019 someone died by suicide every 11 minutes. For every death by suicide, there were 25 attempts. This is the statistic I see talked about less often and the one that concerns me the most.

As a society, we tend to focus on fatalities, but for every person who dies by suicide, 25 people have attempted it. And there are even more people who have suicidal thoughts but don’t act on them and others who struggle with a mental illness but don’t have suicidal ideation as a symptom. We miss so many people by only talking about deaths.

I have the honor of doing suicide prevention in my ministry as a United Methodist Deacon, so I wanted to share some tips with you and give a few practical examples of what some Michigan congregations are doing to address this critical issue.

How to Talk to a Friend about Suicide

If you are concerned that someone might be thinking about suicide, I recommend having a private conversation with them when they’re sober and asking the following three-step question.

In this step, you tell your loved one what you have noticed that is causing you concern. This step lays the foundation for the conversation, and it tells them why you’re bringing this up.

In this step, you say something about your relationship with this person to establish why it matters to you. This step shows you care about them. Use whatever language feels genuine and authentic to your relationship.

Step 3: Have you been thinking about suicide?

This step can be scary, but it’s important to ask a direct question and use the word “suicide.” If you’re vague or beating around the bush, you’re not going to get a clear, direct answer. Asking someone about suicide will not plant the idea in someone’s head and make them start considering suicide. Asking someone about suicide can make them feel comfortable expressing their thoughts and feelings.

If they say yes, ask if they have a plan.
If they say yes, they’re thinking about suicide, so ask if they have a plan. Many people have thoughts of suicide but don’t have any plan or intent to attempt it. If they have a plan and intent to act, you want to get them help immediately. Try to get them to agree to stay safe, see if they’re willing to go to the hospital for inpatient treatment, or call 988 to talk to a crisis counselor. If you’re not physically with them and you’re concerned that they’re in imminent danger, call the police and request a welfare check.

Other general tips for having this conversation

What Some Local Churches Are Doing

You may wonder what your local church can do to help prevent suicide. Here are some inspiring things some churches in Michigan have done:

I would be remiss if I didn’t mention that taking care of yourself is also a form of suicide prevention. If you are struggling with mental health or are having suicidal thoughts, please seek help for yourself. The world is better with you in it. And God loves you no matter what. Romans 8:38-39 says, “I’m convinced that nothing can separate us from God’s love in Christ Jesus our Lord: not death or life, not angels or rulers, not present things or future things, not powers or height or depth, or any other thing that is created” (CEB). In other words, nothing—not even mental illness or suicide—can separate us from God’s love.

If you have questions or would like to chat further about suicide prevention, email me at mmking108@gmail.com.