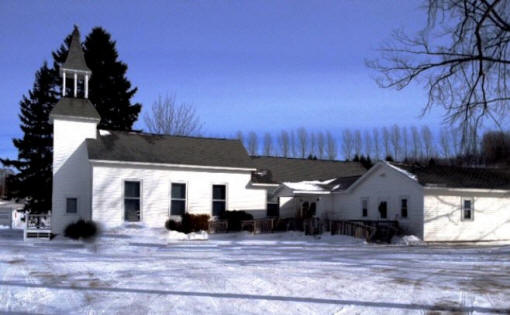 A Native American pastor in Northport speaks of wounds inflicted in the past and  healing actions in the present.

Northport Indian Mission United Methodist Church sits out on Michigan’s Leelanau Peninsula, north of Traverse City, just southeast of the town of Northport. The congregation is pastored by the Rev. Terry M. Wildman, appointed there in 2015.

Wildman, a Michigan native of Ojibwe and Yaqui heritage, says, “Before coming to pastor this church, for the last ten to 12 years my wife, Darlene, and I have been traveling nearly full time all across the country doing ministry, trying to bring reconciliation and understanding to the churches about our native people, then helping our native people understand about the church.”

Wildman has written four books. One of them, Sign Language: A Look at the Historic and Prophetic Landscape of America, describes how Native children were not only encouraged, but forced, to go to boarding schools. Wildman says, “Michigan had some of the early boarding schools. One was in Mt. Pleasant, run by the Methodist Church and another one, in Harbor Springs, was operated by the Catholic Church.” There children were punished for speaking their Native languages. “Imagine,” says Wildman, “not being able to speak your language then going home and not being able to speak with your parents and grandparents because they don’t speak English!” This practice continued through the 1950s, “so, there are persons alive today who remember that experience.”

Today, when non-Native Americans attend powwows “they are often confused because they don’t understand the words to the songs,” Wildman points out. “Well, you can imagine how children, coming home from those boarding schools, must have felt when they couldn’t even speak their own native languages.”

Wildman explains that churches got involved in cooperating with the government, “taking away our languages, our spiritual ways, and our identities, and sometimes even stealing our children away from us!” Wildman continues, “Too little has been done by the churches to address this history. Even the story of Jesus is one that was put upon Native Americans while in the process of being oppressed. So, now it is important that we find ways of telling the story of Jesus so that Native Americans may find spiritual meaning to the story from their own perspective.”

People sometimes question why Native Americans are allowed such things as being able to go fishing without a fishing license. “What people don’t realize,” says Wildman, “is non-Native People are allowed to live peaceably on this land is because Native People made treaties in exchange for certain rights. And these treaties were meant to last forever, as long as the rivers run, as long as the sun rises. So, it’s not like the government is giving us handouts. It is something that is owed to Native People because Non-Natives now have the land.”

To those persons who say Native Americans should assimilate and just ignore what has happened to them throughout history, Wildman says, “Well, that’s easy to say when you’re the one that has all the privileges!” He goes on, “this was originally our land and in many ways it still is although we were nearly wiped out.”

The 2016 Annual Conference, combining members from the Detroit and West Michigan Conference will experience “The Act of Repentance and Reconciliation” on Friday, June 10. This fits well into what Pastor Terry and his wife, Darlene, have been working on for a long time.

Churches and individuals  looking for ways to participate in reconciliation might want to contact the Rev. Terry Wildman to help with what he calls his “First Nation Version Project.” In addition to his book, Sign Language, he has written or edited three other books. The most recent book Gospel of Luke and Ephesians: First Nations Version, was edited by Wildman in collaboration with the First Nations Version Translation Council working with OneBook and Wycliffe Associates. The project  involves First Nations/Native Americans from more than 25 tribes. It is the goal of this collaboration to eventually compose a First Nations version of the whole Bible.

When the Great Spirit Walked Among Us tells the story of Jesus from the perspective of all four Gospels combined into a single narrative. The retellings is for Native Americans and all English speaking First Nations Peoples. For example: Abraham is “Father Of Many Nations,” Jesus is “Creator Sets Free,” and Peter is “Stands On The Rock.” Birth of the Chosen One is a book for children that retells the sacred story of Jesus’ birth following the oral tradition of the indigenous storytellers with full color illustrations by Ramone Romero. Terry and Darlene are both musicians, performing as Rain Song, a non profit corporation they started in Arizona in 2002.

As he puts it, “These days, the mission that Native American Christians may provide to the rest of us could do us all a lot of good!”