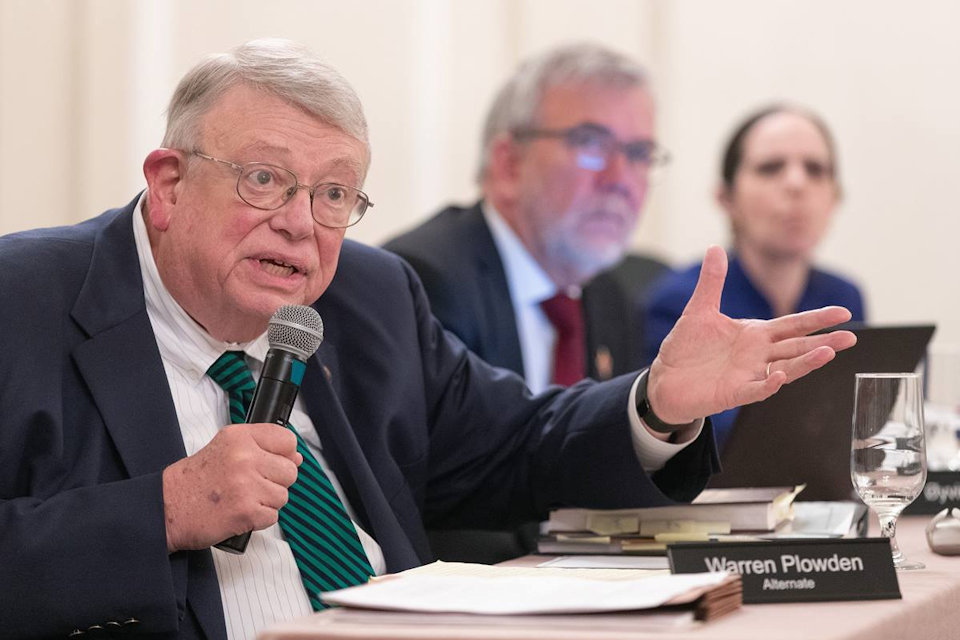 United Methodist Judicial Council member Warren Plowden (left) asks a question about the investigation of improper voting during the 2019 United Methodist General Conference. He was questioning Bishop Kenneth H. Carter, president of the denomination's Council of Bishops, and William Waddell, the council's legal advisor, during an oral hearing at the Judicial Council meeting in Evanston, Ill. ~ UM News/Mike DuBose

In making that determination, the United Methodist Judicial Council at least temporarily bypassed the assertion from a Commission on General Conference investigation that improper voting meant the vote to substitute parts of Petition 90066, the disaffiliation petition, was null and void.

The court decided to hold the request submitted by the Council of Bishops on the question of improper voting to its next session. In Decision 1386, the Judicial Council noted that “because of our inability to get the information requested during oral argument” it would be best to re-schedule the case.

On a related matter, the Judicial Council issued no opinion on the “constitutionality, meaning, application or effect” of certain petitions of the Traditional Plan, also adopted in February.

“The votes of the council members were insufficient to declare unconstitutional any of the provisions before us,” the court said in Memorandum 1390. At least six of the nine members of Judicial Council must agree in a vote on constitutional issues.

“Our rulings on the constitutionality, meaning, application or effect of the various provisions will await the specific facts of applications of these provisions in cases to come before the council after January 1, 2020,” the court said, referring to the request from the Council of Bishops for clarity on five questions related to the Traditional Plan.

This decision and other rulings were released after the close of the court’s Oct. 29-Nov. 1 meeting, which included two Oct. 30 oral hearings. Warren Plowden, first lay alternate, participated in the meeting because Judicial Council member Lidia Romao Gulele was unable to attend.

In Decision 1385, the Judicial Council found the proposed effective date on the disaffiliation language had never been in question even after the original Petition 90066 was amended by the minority report. “The body clearly understood that only those specific changes in the minority report were before it,” the decision said. “The prefatory language remained unchanged before the General Conference. The effective date of Para. 2553 is the close of the Special General Conference.”

In a related case on disaffiliation, the court deferred until its next meeting the deliberation of a ruling on a question of law by New England Conference Bishop Sudarshana Devadhar regarding that conference’s disaffiliation policy and discernment process.

Related in another way to General Conference 2019 were a number of October docket items on bishops’ decisions of law on various annual conference actions.

Among the rulings in those cases, the Judicial Council:

Judicial Council also upheld, in Decision 1391, the three-part ruling by Bishop LaTrelle Miller Easterling that the action of the clergy session of the 2019 Baltimore-Washington Conference to approve ministerial candidates as a group was handled properly.

Responding to a constitutionality question brought by the Western Pennsylvania Conference, the Judicial Council found several provisions under church law on an annual conference’s administrative matters to be “unconstitutional, null and void.”

In Decision 1383, the top court found that provisions in the Book of Discipline “setting forth the administrative process” on involuntary leave of absence, involuntary retirement, administrative location and discontinuance from provisional membership violate the guarantees of “a fair and unbiased process” found in church law.

The full roster of Decisions 1380 to 1399 from the October meeting can be found on the Judicial Council website.