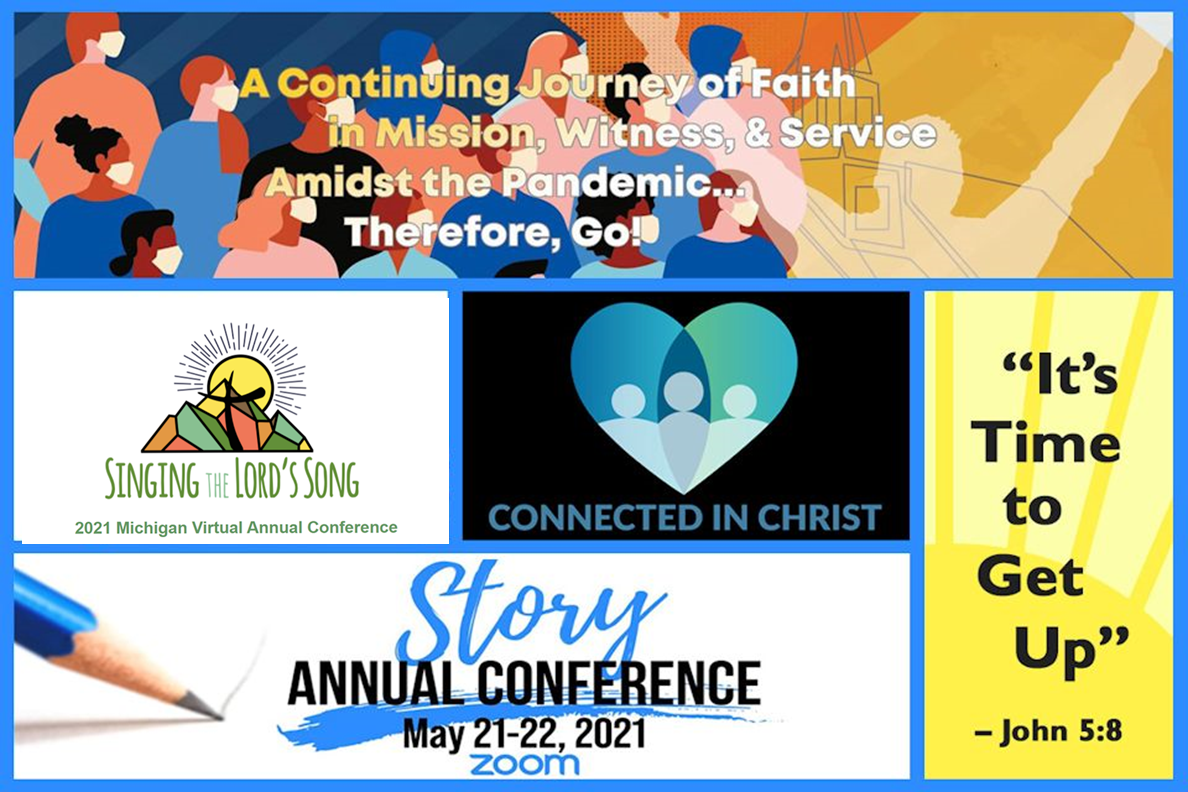 Themes for United Methodist annual conferences in 2021 include (clockwise, from top) “A Continuing Journey of Faith (conferences in the Manila Episcopal Area), “It’s Time to Get Up” (Sierra Leone), “Story” (Louisiana), “Singing the Lord's Song” (Michigan), and “Connected in Christ” (Iowa). UM News graphic/Laurens Glass

Race and LGBTQ inclusiveness are among top issues on the agenda of virtual annual conferences taking place across the U.S. and around the world.

Annual conference meetings will largely remain virtual this year, but some are planning hybrid events as the coronavirus threat ebbs in the U.S. Petitions about race, sexuality and other issues will be considered.

“Nothing can replace gathering together for worship and study and listening for the voice of the spirit in the conversations on the floor and in the hallways,” said the Rev. Donnie Wilkinson, senior pastor of Broadmoor United Methodist Church in Baton Rouge, LA.

“I could see some sort of hybrid model where many of the reports could be done online. You come to the meeting itself having prepared by having time for technical questions where a conference committee is having a Q&A session on Zoom.”

For now, the Louisiana Conference meetings will be entirely online, the choice of most for 2021.

In the Western Pennsylvania Conference, the meetings will be a blend of in-person and virtual. Paper ballots on three or four essential items will be used, the first of which is a resolution suspending the rule that voting be done in-person. That’s being done just to get through this year.

Other paper ballots will be tabulated to approve the 2022 budget and a slate of nominees for boards and agencies, said the Rev. Alan J. Morrison, chair of the conference sessions team.

“I think we’re in the midst of a generational change,” Morrison said. “If we can start doing some of the business items in these other ways, then we can get together and have it be more about celebrating and relationship-building. I would hate to see us go completely online because we do lose something very much in relationships.”

In Europe, the Hungary Provisional Conference already completed its meetings, said Urs Schweizer, assistant to the bishop for the Central and Southern Europe Episcopal Area in Zurich. The Austria Conference met May 13-16 and Switzerland-France-North Africa is set for June 16-20. All the European meetings have been hybrid. Postponed until the fall are Bulgaria-Romania, Serbia-North Macedonia-Albania, Poland, and the Czech and Slovak Republics.

“But ordination we are going to meet personally at a proposed place whilst maintaining social distance, sanitizing and masking up,” he said.

Issues such as the status of LGBTQ people and racism are subjects of petitions and resolutions in multiple conferences.

In Michigan, resolutions are proposed to create training for clergy and congregations who are experiencing or will experience cross-racial, cross-cultural appointments and also anti-bias and anti-racism training for active clergy, conference and district staff.

“To be blunt, the church has been far too quiet on the matter of race and bias,” said the Rev. B. Kevin Smalls, senior pastor of Hope United Methodist Church in Southfield, MI, and a member of Bishop David Alan Bard’s anti-bias/anti-racism working group.

“We want to equip congregations and pastors to address it. … The bishop will ask every congregation to undertake some of this,” Smalls added.

Other conferences with petitions or resolutions on race include Oregon-Idaho, Louisiana, and East Ohio.

The Liberia Conference in Africa concluded March 21 in Gbarnga City with an affirmation of its previous decision to support the traditionalist position on church issues.

“We want to be a part of the traditionalist Methodist church that will make disciples of Jesus Christ,” said Liberia Bishop Samuel J. Quire Jr. during his episcopal address on March 19. “We are also confident that the God whom we serve is not broken. God will sustain God’s Church.”

In the U.S., resolutions and petitions supporting inclusiveness for LGBTQ people have been filed in conferences including Susquehanna, West Ohio, and Michigan.

“We’re of the viewpoint that the church’s mission is to be inclusive of people and that the matter of inclusiveness has not been taken as seriously as it needs to be taken,” said the Rev. Michael Minnix, pastor of Grace United Methodist Church in Harrisburg, PA.

In the past, some Methodists have argued against total inclusion for women and Black people, Minnix said.

“In every instance where the church has worked to exclude a group of people, we have reached the point in history later on when we have had to repent and apologize for doing so,” he said.

“My hope is that the church will be able to embrace its mission to the world and place that at a higher level of importance than the differences that divide us … and work on negotiating and resolving our differences and stay united in our mission.”

In Louisiana, Wilkinson has filed a petition requesting officials work to make most conference meetings open and available for anyone to view.

“Given the heightened level of anxiety and mistrust that is across the entire global denomination right now, communication is one of the best ways to lower the anxiety and rebuild trust,” Wilkinson said.

“Part of what I realized was that for the first time the technology exists to actually do this in an intentional, broad-based, inclusive way. One of the upsides from the pandemic was seeing how readily people adapted to online meeting.”