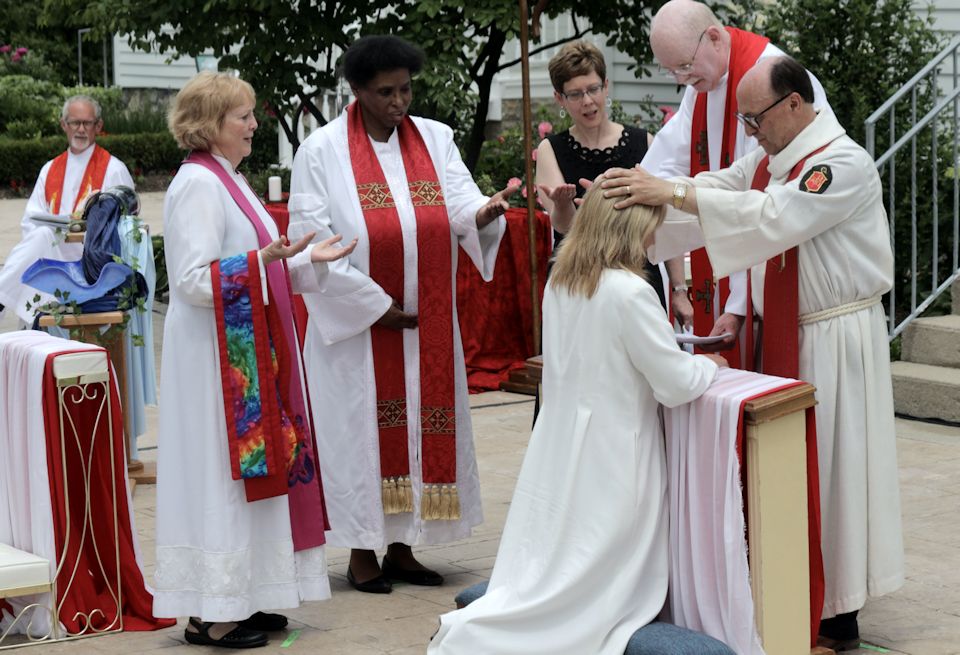 It was not the typical Service of Recognition, Commissioning, and Ordination held on June 8. But the celebration that took place at Troy Historic Village confirmed, we ARE yet alive.

“What sort of a group is it that asks you every year if you are still alive?”

That’s the probing question Bishop David Bard asked the ordinands and newly commissioned candidates for ministry in his ordination sermon on June 8, 2021. He was, of course, referring to the great Methodist hymn which has opened annual conferences since the time of John Wesley:

And are we yet alive, and see each other’s face?
Glory and thanks to Jesus give for his redeeming grace.

Even at this joy-filled, high, and holy moment of ordination, the bishop acknowledged the reality that will confront these new clergy, the hard truth affirmed in the hymn:

What troubles have we seen, what might conflicts past;
Fightings without and fears within since we assembled last.

But his focus was on this hopeful verse of the hymn:

Yet, out of all the Lord hath brought us by his love;
And still he doth his help afford, and hides our life above.

The final phrase comes from Colossians 3:3: “Your life is hidden with Christ in God.” Bishop Bard said, “The writer of Colossians focused on God-things by telling them that this was where their real life is.” He challenged the ordinands to “Do soul work for its own sake and the sake of your ministry.”

This year the Service of Recognition, Commissioning, and Ordination was unique in many ways. First, it did not take place at the site or in the context of the regular session of the Michigan Annual Conference. Since the conference was “virtual,” the service was celebrated and recorded outdoors at the Troy Historic Village, Troy, MI, on June 8. It was then broadcast on the conference website and Facebook page on Sunday, June 13, 2021. It’s now available on Vimeo. (see below)

In the intimate village setting, the white clapboard building, which had served as the home of First United Methodist Church of Troy from 1868 until 1963 and the former parsonage, provided a powerful reminder of the historical traditions of Methodism represented in the rite of ordination. Conference Communications Director Mark Doyal said, “The setting made it feel like we were meeting in a town square. It was so joyous to be out and to be together after months of COVID isolation. The sense of reunion was palpable, bringing an energy we haven’t felt for a long time.”  The blazing sun was interspersed with rolling thunder clouds which occasionally produced droplets of water. The gentle breeze lifted the colorful stoles of the participants like the fresh wind of the Spirit blowing through the assembly to empower these new clergy for ministry as the gathered community prayed, “Come, Holy Spirit.”

Second, this year’s event included both the 2020 and 2021 classes since last year; the candidates were received into conference membership but not commissioned or ordained. Given the delay for last year’s class, the anticipation and exhilaration were magnified for all who shared in the day. The absence of the rest of the clergy community, extended families, and the annual conference members was notably obvious. Still, it did not dilute the exuberance of those gathered for the day. Doyal concluded, “It was a day these folks will remember and talk about for the rest of their lives.”

Third, as Michigan’s Director of Clergy Excellence Jennifer Browne said, “The new Provisional and Full Member class of 2021 was the first, and we hope the last, to go through candidacy and the interview process completely online. The Board of Ordained Ministry and I commend them for the resilience, stamina, and creativity they showed in these new and unfamiliar circumstances.” Rev. Barry Petrucci, chairman of the Board of Ordained Ministry, added, “Thanks to all of these people for patience and understanding. We honor your call, and we honor your adaptability.”

So how do newly commissioned and ordained clergy feel about joining this community that asks them every, are you still alive?

The Rev. Linda Stephan says the transition from Provisional to Ordained Elder took on special meaning because of the times. She was commissioned in 2018 and was preparing for Elders’ Orders in the face of the conflicted 2019 General Conference, the COVID-19 pandemic, the Black Lives Matter movement, the election of a new President, and the insurrection of January 6. She said, “All of that forced me to a point of clarity about my call and my identity as a pastor. It confirmed my theology and my confidence that I was ready to lead.” Coming into the Order of Elders at a time when the church is on the verge of schism, she said she hopes that, “We will be able to be honest, loving and open with each other and be gracious with those who feel they need to leave.” She hopes those who remain in the UMC will be “live coals refined in the fire in order to be what God intends us to be.”

Newly commissioned Provisional Elder Audrey Mangum says this moment has been “highly anticipated because I had been ducking and dodging this calling for a long time. It feels wonderful to be taking this step toward ordination finally.” Her journey began when she was a freshman in college in Tennessee, and a group of students came to visit from New York City, sent by their pastor. She says, “They told stories about how God could change lives. And it was all through the outreach of a pastor.” Now she will become the pastor at Conant Avenue United Methodist Church in Detroit with the hope of changing lives.

The Rev. Matthew Chapman was a member of the class of 2020 who was received into Full Membership but not ordained because of the pandemic. Matt says, “It’s been like living in a weird, gray area with all the authority of the office, but lacking the high moment of ordination itself. I feel like the Annual Conference, and I signed the marriage license last year but didn’t make it to the wedding.” Since Matt was raised in the Roman Catholic Church, he has a high view of ordination. “Even though we United Methodists don’t regard it as a sacrament,” he said, “the act of the laying on of hands represents the history of apostolic succession and the empowerment of the Holy Spirit for ministry, so it carries the emotions and the strength of a sacrament for me.”

Also a member of the class of 2020, Deacon Rodney Gasaway was the lone Deacon being ordained this year. Rodney’s first call to ministry focused on missions. He was certified as a Church and Community Worker by the General Board of Global Ministries, then worked for ten years at the Joy-Southfield Center in Metropolitan Detroit. In that role, he sensed the commitment of the church to service but felt the connection back to the church was missing. Therefore, his calling to the Order of Deacon was to be “the bridge which would link the church and the world and empower persons on both sides.” One of his outreaches in the community is serving as a chaplain for the VFW and the American Legion motorcycle groups. Complete with a leather vest and known as “Rev Rod,” he meets persons who have never had a connection with the church before. He believes, “It’s all about being the church out there where people are.”

This year’s service included the ordination of one Deacon and twelve Elders. Nineteen persons were commissioned as Provisional Elders and Deacons, and five persons were recognized for transferring their orders into the Michigan Conference. Find the names and photos on pages 34-39 of the Annual Conference Program Guide.

As the fresh June winds blew through the historic village, Bishop Bard concluded his sermon by saying, “You have given yourself to one of the most amazing, sometimes heart-breaking, sometimes crazy-making, often joy-filled callings in all the callings of God on human lives. Keep saying “yes” to this calling and do the soul work required for this calling. Do it for your own well-being.  Do it to lead well.” Click here for the full text of Bishop David Bard’s sermon.

And every year, when the annual conference gathers, they will ask, “And are you still alive?”