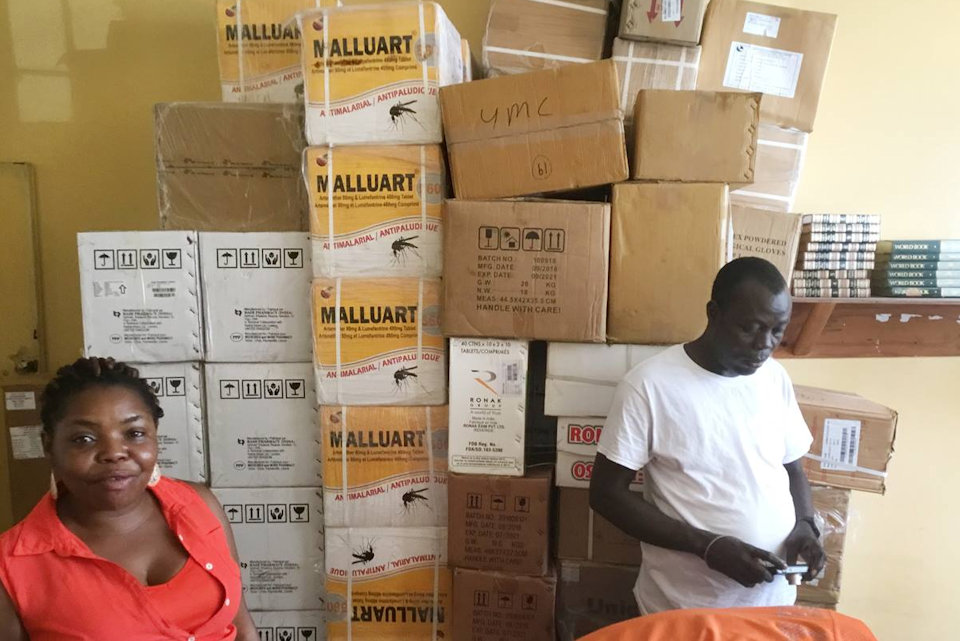 Imagine No Malaria continues to save lives in Africa. The health system in Liberia is grateful for $40,000 of supplies and meds to combat malaria.

Health department director Lango W. Toe said that though the drugs are destined for United Methodist health facilities, all Liberians living within the areas of the health facilities will benefit from the medication.

“We do not separate United Methodists from other Liberians when it comes to treating illnesses,” she said.

Toe also indicated that the medicine shipment is the first in the series of donations that the church will receive through its Imagine No Malaria program for 2019. The project also will support the ongoing capacity building of health facility staff and improved monitoring.

Tatenda Mujeni, who leads the Imagine No Malaria program said the $40,000 worth of malaria medications, tests, and mosquito nets is the first installment of such items. “Through the grant, the Liberia Episcopal Area has been awarded $38,500 for long-lasting insecticide-treated nets and a total of $130,000 for malaria medications and tests,” Mujeni said.

D. Levi Hinneh, Assistant Manager for Research, Monitoring and Evaluation at the National Malaria Control Program of the Ministry of Health and Social Welfare, reported that malaria accounts for over 42% of outpatient and 39% of inpatient deaths at most of the health facilities in Liberia.

Citing the 2016 Liberia Malaria Indicator Survey, Hinneh pointed out that between 2013 and 2014, gains that were made to reduce malaria morbidity and mortality in Liberia were eroded by the Ebola outbreak, which dismantled much of the country’s health system. Hinneh said the Liberian government hopes to increase access to prompt diagnosis and effective treatment of malaria for 85% of the population by 2020.

According to Toe, five of the eight United Methodist health facilities throughout Liberia will benefit from the gesture. The donated medication will serve Camphor Mission and John Dean Town in Grand Bassa County, Ganta Mission in Namba County, Weala Mission in Margibi County and the Dieke Mission in Guinea. She said that the five health posts are now serving over 200,000 catchment populations.

Regarding the other three clinics — Bopolu Mission in Gbarpolu County, Gbeazon Town Mission in Sinoe County, and the St. Matthews United Methodist Clinic in Montserrado County — Toe said the church in Liberia is faced with numerous challenges that will not allow the health department to include all the health posts in this shipment.

“This is the best we can do in sharing these drugs while we seek other ways to include the other three health posts in future distributions,” she said.

The Rev. George D. Wilson Jr., director of connectional ministries for the church in Liberia, noted that these health facilities do get periodic assistance from other partners, individuals and United Methodist conferences in the U.S.

Wilson said that, unfortunately, the conference cannot afford to fund all of its clinics and hospitals, and depends on Global Ministries to supply its health program with the needed medication.

“Our church is financially challenged. We, therefore, appreciate our brothers and sisters who are helping us meet the health needs of our membership and other Liberians,” he said.