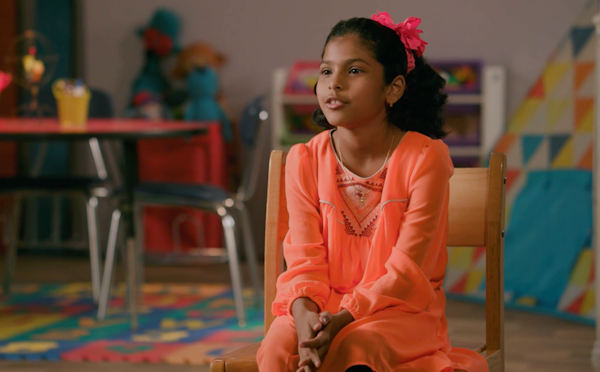 Ads produced by United Methodist Communication will run across the United States March through June, 2017. Elementary-aged children respond to the question, "What does it mean to have an open heart?"

A national advertising campaign by UMCOM celebrates seeing the world as young people see it.

Innocence, wonder and hope will be at the heart of The United Methodist Church’s national advertising campaign this year. The denomination is extending an invitation to people searching to give their lives deeper meaning through the words of children who share their thoughts about open hearts, minds and doors.

The advertisements feature elementary-aged students answering questions such as, “What does it mean to have an open heart?” The children’s inspiring answers reveal the depth of their beliefs, the strength of their faith and their devotion to the ministries of the church.

“This campaign encourages us to pause and see the world as young people see it,” said Dan Krause, general secretary of United Methodist Communications. “The openness and loving spirit that children offer to their communities can be the perfect invitation for people considering a visit to their local United Methodist church.”

The “Open hearts. Open minds. Open doors.” tagline has been part of the denomination’s advertising and outreach efforts for 16 years. The new ads offer a fresh approach to the meaning behind the statement, asking viewers to ponder what life would be like if everyone loved with open hearts, minds and doors as children do.

The ads then conclude with a statement of hope and invitation, “We believe that together, through God’s love, we can make it happen.”

The first set of advertisements will focus on the core values of The United Methodist Church and then will continue with messages about Easter, love and kindness. The ads will run March through June across the U.S. via print, digital platforms and cable television.

Local churches can take part in the campaign during the upcoming Lenten season; further details about resources will be released later this month at UMCom.org/RethinkChurch.