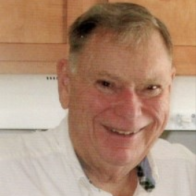 Pastor Charles M. Lewis was born February 4, 1933, in Brigden, Ontario Canada, to Charles H. Lewis and Beulah M. Humphrey. He died at home on June 21, 2022. When he turned eighteen, he elected to become an American citizen, voted in every election, and loved this country dearly.

His young years were spent dairy farming until he learned to fly and put himself through college doing charter flights around Michigan and nearby states. Charlie married his first wife, Lavonne, with whom he raised four children – Mary Ann – deceased – Linda (Gary Miracle), Bob (Jackie), and Bill (Linda). He received his B.A. in 1957 from Alma College in Michigan; attended Western Michigan University in Kalamazoo where he majored in Philosophy and minored in marketing. From 1961 to 1969 he attended Northwestern University in Evanston, Illinois, then did his graduate schooling at Garrett Theological Seminary. Through all his school years he worked to support his family and was the first of his birth family to graduate.

Charlie flew all over the country to speak at colleges and universities and was given so many honorary Doctorates he was called Dr. Charlie. Also, during these years he managed several gas stations state-wide. He also guest preached at local churches.

But God’s call on his life was insistent and Charlie heeded the call to ministry. He was ordained at Fruitport United Church of Christ where he served many years; then Fremont UCC, then First Congregational UCC in Muskegon, Michigan. 1976 – 1981 God called Charlie to Naples, Florida, the summer of 1981 to found and grow Community Congregational Church, which flourished under his leadership until his retirement in 2001. That church, now called Grow Church, was the love of his life.

In 1983 he married Janice Lewis, whose three children – Chuck (Cindy), Jim (Jewel), and Kristin (Kenny) became his bonus children and his, mine. After Charlie’s retirement he would chaplain at a Fort Myers retirement home for a year, then did an interim in New Smyrna Beach for a year. Meanwhile, he got his wife, Jan, settled in Hernando while he did the interims.

After moving to Hernando for good, he also, as had his wife Jan, joined Seven Rivers Presbyterian Church and was enfolded in love, learning, growth, joy, and faith. Charlie bought a bright red corvette and had another group who surrounded him with respect and love. He was chaplain of Touch of Class Corvette Club until his passing.

Charlie was a wonderful brother to sisters Shirley and Doreen, sister-in-law Pat Oldnettle whose husband and Charlies friend Bob Oldnettle, died March 9, 2022; father and bonus father to all our kids, beloved grandfather and great-grandfather, nieces and nephews, and countless friends.

He was a man of God, a dear husband, an honorable friend, pilot, oilman, and businessman. Our Pastor, Ray Cortese, called him The Energizer Bunny for all the illnesses he recharged from and enjoyed Charlie’s Beau Brummell “Coats of Many Colors” as we sat down front in church.

What can be said about such a man except to say “well done, good and faithful servant.” Indeed!