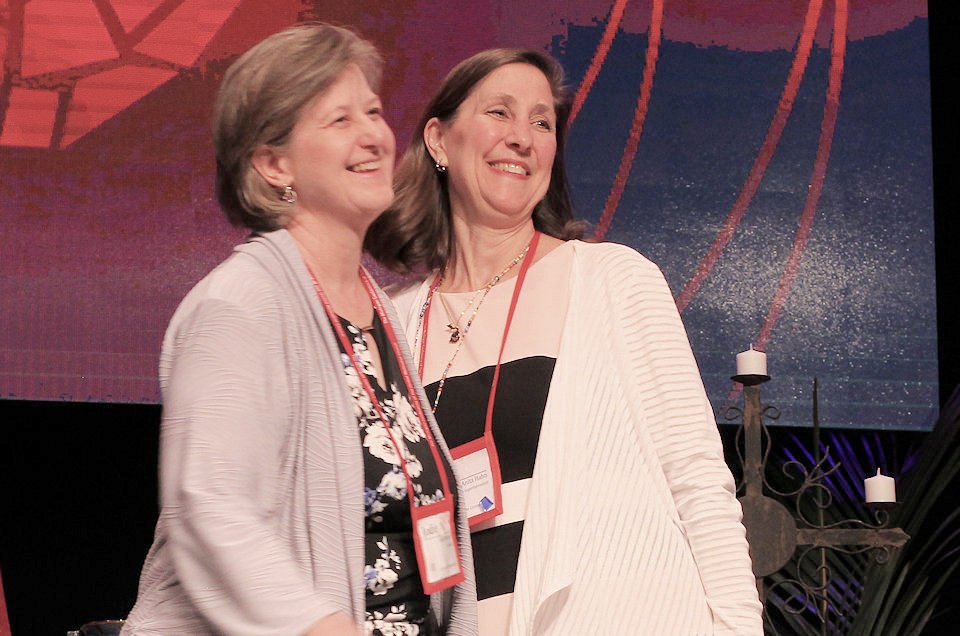 Bold and Effective Leaders was the theme of the 2019 Michigan Annual Conference. Awards, recognitions, and generous thanks were given to people and congregations that have wisdom, heart and courage.

The theme of the 2019 Michigan Annual Conference -- Bold and Effective Leaders -- was expressed in many ways, not the least of which was in the recognition of those who have offered exceptional service.

Four formal awards were conferred through the days together, starting with The John Buxton Award, given to the Rev Don Emmert on Friday morning. Emmert, the Conference Director of Benefits and Human Resources, gave a spirited report using images and metaphors from the 1968 Detroit Tigers World Series Championship. He concluded, “The ball is in our hands,” at which time Conference Lay Leaders, Anne Soles and John Wharton, presented Emmert with the John Buxton Award. First conferred in the Detroit Conference in 1996, this honor recognizing creative leadership. On the conference staff since 2000, Emmert has helped establish best practices in Pensions and Benefits. “He goes unnoticed for most of the work, but if you have ever been in need you know he goes above and beyond because he truly knows everyone in this Conference,” Soles said.

Saturday evening was a parade of kudos. The Rev. Gary Henderson arrived on the stage at the conclusion of a report by Mark Doyal, Director of Communications for the Michigan Conference. Henderson, the Chief Relationship Officer for United Methodist Communications (UMCOM), was present to “celebrate excellence in communication ministry with an EPI, a communications Oscar or Emmy of sorts.” He explained that the Greek word, “Epikoinonia” is about a deep, intimate connection to community. The EPI Award was given to Doyal, “who embodies the spirit of such Christian communication … where there is no communication, there is no community.” Doyal accepted the award saying, “This is my tenth year with you. It has changed my life being with all of you.”

The Rev. Dirk Elliott, Michigan Director of Congregational Vibrancy, came to the stage to present the Harry Denman Award, named for a “crumpled, driven, faithful man who introduced many to Jesus Christ.” The 2019 recipient of the Denman Award is the Rev. Matt Bistayi, Lead Pastor of Valley Church in Allendale. Bistayi was appointed to the new church start in 2009 and launched the church a year later with over 100 in attendance and has been growing ever since. Elliott said, “Matt attributes the growth to a focus on worship, community and mission. Valley is one of the youngest congregations in the Michigan Conference.” Elliott commented on Bistayi’s belief that, “The mark of a healthy church is not seating capacity but sending capacity.” Pastor Bistayi offered thanks for the award noting, “This is really about the amazing people at Valley who believe and breathe the love of Jesus. We are a community of crazy people.”

The Hartford United Methodist Church, Greater Southwest District, was then honored with the One Matters Award conferred annually by Discipleship Ministries. The award recognizes intentional discipleship and was created in 2015 to lift up churches moving from zero baptisms and professions of faith into positive numbers. Doc Hall, present from Discipleship Ministries, explained that in addition to a plaque, the congregation receives $1,000 to advance their ministry. The Rev. Gary Step, Associate Director of Congregational Vibrancy, said, “This is exciting good news!” as he introduced Pastor Ryan Wenburg as, “a bold and effective leader.” Step highlighted various reasons that Hartford overcame a pattern of “stalling out”: The Bridge, a program that reaches out to the ethnic diversity in their community; single board governance; and a well-equipped laity. “Pastor Ryan is not a go-alone. He helped train the congregation to led and not depend on the pastor.” Calling on the Conference theme, Step concluded, "As this conference is challenging us to step out of the boat to be bold and effective leaders; Ryan is doing this with courage, passion and humility! I am honored to present this award to this day for such a time as this!!"

Another group of people recognized for their service – 360 years of combined ministry – was the 2019 Michigan Conference Retirees. They were among those included in, “Celebrating the Journey of Ministry,” on Saturday, June 1. That program, hosted by the Board of Ordained Ministry, featured Slam Poetry by five creative presenters. The Rev. Jeff Nelson, Royal Oak UMC, addressed the Retirees … “Live like climbing Mt. Everest is something you might actually do, once a year every year for the rest of your life … Live like the wall you are leaning on is holding the whole world up … Live like you’ll never have to go to a Board of Trustees meeting ever again … Live like you’ve never heard of hate…” Personal tributes and congratulations were offered to all retirees. (Soon the slam poetry shared during celebrating the Journey of Ministry will be available online on this website.) For photos and bios of those retiring from active service this year, click here, and go to pages 66-84. Later during the celebration, the Rev. Arthur Spafford, retired in the Detroit Conference in 1991, was named as the holder of the Conference Cane. The Conference Cane, now in the conference archives, honors the oldest living United Methodist Elder in Michigan.

Many other expressions of thanks were made throughout the Annual Conference, some marking times of transition. These people were honored for jobs well done: